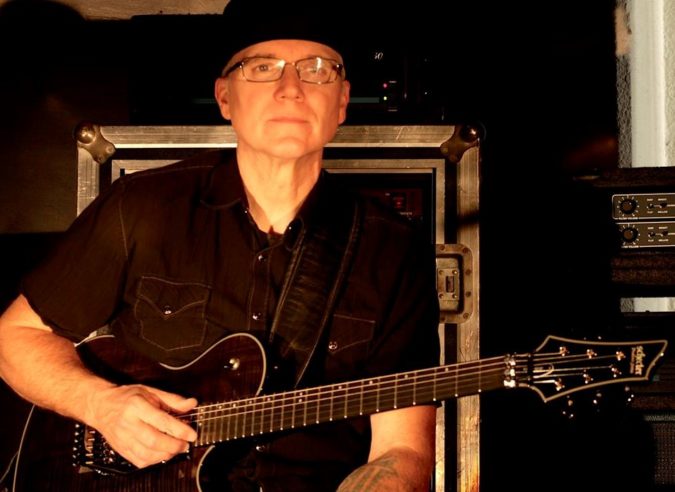 In 1986, two particular thrash metal bands were dominating the scene that lay before them, each four-man entity had released game-changing albums that year. Historically these bands were irrevocably intertwined.

I speak of Metallica, with their monumental ‘Master Of Puppets‘, and Megadeth, the band begun by their former guitarist, Dave Mustaine, and his band’s sophomore effort, ‘Peace Sells… But Who’s Buying?‘. The latter’s eight-song detonation, released through Capitol Records, was a caustically crafted, now-benchmark outing of incendiary metal laden with a punk attitude. Volatile, threatening, and socio-politically aware, the album reflected the aggression and abilities of the four men behind its becoming: Dave Mustaine (lead vocals, guitar), David Ellefson (bass, backing vocals), Gar Samuelson (drums), and Chris Poland (guitars).

‘Peace Sells… But Who’s Buying?’ was well received by the music critic community, many of whom viewed the record as a revolutionary leap forward after Megadeth’s ‘Killing Is My Business… And Business Is Good!’ début. Though it may not be the band’s most technically proficient album, it exhibited a distinct sound that helped set them apart from their contemporaries. Considered an essential component to the history of thrash metal that has influenced countless metal bands ever since, ‘Peace Sells… But Who’s Buying?’ is unquestionably one of the all-time greatest metal recordings.

Yet, less than a year after this landmark was established, Chris Poland was out of Megadeth (as was Samuelson) after two albums. His exit was not on the greatest of terms, for at the time Poland was battling substance abuse issues, but the firing was the wake-up call he required. After successful treatment for his addiction problems, Poland resurfaced as a touring bassist for the Circle Jerks in 1988.

It was during the time spent on the road with the band that Chris was writing and working on his own material. In 1990, he issued his first (post-Megadeth) recorded musical output, the Enigma Records release, ‘Return To Metalopolis‘. The collection of songs was a radical stylistic departure from the material in Poland‘s previous band setting, with this muscular instrumental album constructed around a technically fluid, jazz-infused take on heavy metal.

With no one but himself playing guitar and bass and his brother Mark Poland on drums, Chris Poland co-produced ‘Return To Metalopolis‘ with Randy Burns, who also engineered and mixed the album. Shortly prior to recording his album, Poland agreed to record demos for Megadeth’s fourth album, ‘Rust In Peace‘, but declined what would be the first of two offers to permanently rejoin the band. With his focus primarily on his solo album, and the fact that most of the Megadeth album’s music and arrangements were already written, Poland felt that his input would be limited. Guitarist Marty Friedman later joined Megadeth and adapted some of Poland‘s guitar solos for the release version of ‘Rust In Peace’, which would go on to be one of Megadeth’s most critically praised albums. The demos recorded for the ‘Rust In Peace‘ record can be found as bonus tracks on the 2004 remastered version, released by Dave Mustaine without Poland‘s permission.

This would not be the last solo output from Chris Poland, as he followed up with a sophomore album in 2000, ‘Chasing The Sun‘, released through Grooveyard Records. The label was also behind a compilation album release of material from Poland that year, ‘Rare Trax‘. In 2007, Lion Music issued the ‘Return To Metalopolis Live‘ enhanced release (streaming at the bottom of this page). It contained a live set of material from Poland‘s solo studio début, recorded at The Mason Jar in Phoenix, AZ in 1991, two unreleased studio tracks, and a live video of another show filmed in 1999, at The Baked Potato in Los Angeles, CA.

It was not long before Poland found himself within another band. One that, like his previous participating endeavors, was another animal altogether, genre and stylistically speaking. Enter the progressive metal mastery of DAMN THE MACHINE, formed in 1991, by Chris, his brother Mark, Dave Clemmons (guitar, vocals), and David Randi (bass, vocals). Their first output, ‘Demo 1992‘ soon arrived, followed by a four-song maxi-single, ‘Silence‘. A 12-song eponymous album recorded and produced by Brian Malouf (Wolfmother, Queen, Pearl Jam) was then released by A&M Records in 1993.

For me, the album is a melodic, prog metal masterpiece containing mid-tempo song structures with lots of odd meters and unusual arrangements. Never too drawn out, self-indulgent, or overbearing, this is textural metal with semi-dark, dynamic elements. In typical Chris Poland fashion, there are signature jazz leanings embedded all through this music, yet, overall it is not all that far removed from acts like Fates Warning or Queensrÿche. I, for one, find DAMN THE MACHINE to be one of Poland‘s finest moments and regard my seeing them supporting Flotsam & Jetsam’s ‘Cuatro‘ album tour in 1993 as a concert-going highlight even now.

Dave Clemmons departed the band in 1994, but not before he had contributed to some songs-in-progress which would surface in 1995, as the five-song offering simply titled ‘Demo‘. It is widely known that an album’s worth of B-sides from the initial recording sessions, as well as rehearsal quality versions of several songs the band was working on for their sophomore effort exist, yet have never been released. With Clemmons’ exit, the band shifted towards blues-inspired material and changed their name to Mumbo’s Brain. Employing a new vocalist, John Skipp, this short-lived entity released ‘The Book Of Mumbo‘ demo, also in 1995, but Skipp and David Randi quickly left and the band folded.

In the years since that time, Chris Poland made numerous guest appearances with several bands and upon a multitude of albums, like Lamb Of God’s ‘As The Palaces Burn‘ and ‘Ashes Of The Wake‘, released in 2003 and 2004, respectively. In a surprise turn of events, Dave Mustaine requested Poland record guitar solos for the 2004 Megadeth record, ‘The System Has Failed’, the first Megadeth album not to feature original bassist, founding member, and Poland’s previous bandmate, David Ellefson. Poland recorded the solos on a contractual basis but did not rejoin the band. Poland and Mustaine subsequently came into dispute with one another overpayments relating to the ‘Rust In Peace‘ re-release, where demos of Poland playing solos for some tracks that were to eventually appear on ‘Rust In Peace‘ were included (referred to above).

Since the early 2000s, Chris has explored and indulged some of his most experimental creativity, alongside bassist Robertino “Pag” Pagliari in OHM (occasionally known as “OHMphrey“, a larger ensemble anchored by Poland and Pagliari). Chris has recorded with technical metallers Tourniquet, as well as progressive metal powerhouse Redemption, appearing on a pair of 2018 album releases, ‘The Art Of Loss‘ and ‘Long Night’s Journey Into Day‘. He also appeared live with the band at the 19th annual edition of the famed ProgPower USA festival that same year.

Caught up? Not quite, as this past week, news pertaining to Chris Poland arrived in the announcement he has signed to his former Megadeth bandmate David Ellefson’s relaunched Combat Records. The label will release a deluxe reissue of Chris Poland‘s groundbreaking 1990 solo outing, ‘Return To Metalopolis‘, via CD and digital formats on November 22nd, with pre-order active at this LINK.

This will be followed in December by a limited edition double LP and cassette remastered with bonus material, including live tracks that originally appeared on the long out of print 2007 release, ‘Return To Metalopolis Live‘.