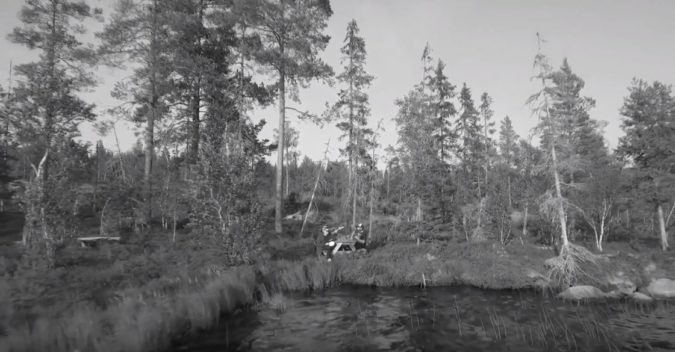 Are you ready for the final installment of Ripple Music’s ‘The Second Coming of Heavy’ series? THE W LIKES and PALACE IN THUNDERLAND are the final two bands in the unique series of splits.

Today we have for you a premiere of THE W LIKES official video for the song “Ghost“. Formed by the shores of Lake Mjøsa, Norway in 2010, the band took a little while to gain steady footing, but their now solid boots keep moving forward. They currently have two EPs and a full-length release under their belt, all released on Ramah Records, which is owned and operated by Balbosj. The EP ‘Into The Within‘ arrived in 2013, with a second ‘This Time‘, in 2015.

With a rejuvenated lineup, the band of three – Willy on guitars and vocals, Balbosj on bass, and Kurti on drums – currently claim to just “play around”, but by no means are they slouching in their take on the heavy psych/ stoner rock with head-first flights into proto-metal. After the self-release of their ‘The W Likes‘ debut album in 2017, Ripple Music caught wind of it and reached out to offer them a spot within The Second Coming of Heavy series. And here we are…

The song “Ghost” is the first track off the new SCOH split, and this song and its accompanying video are a dark slide into a winding, cinematically stunning, and picturesque soundscape. Steadily pacing you into the sonic and visual journey that, while oddly calming, simultaneously gives you an unmistakable sense of foreboding. These savagely nasty riffs, low-down heathen rhythms, and raspy, ominous vocals all demand you to listen. Be sure to watch the video in its entirety, it’s most assuredly worth it.

Serving as an ongoing showcase for some of the best heavy bands emerging from the underground, each installment of ‘Second Coming of Heavy’ shines a light on bands worthy of your attention. Consisting of one 12” slab of gorgeous vinyl with beautiful artwork by Ghost Town Graphics, the series is designed much like a fine anthology of books. When the album series is complete and filed next to each other, the aligned spines form a stunning image direct from the underground.

Bands already featured in the series include Geezer, Borracho, Supervoid, Red Desert, Kingnomad, Cortez, Fuzz Evil, Switchblade Jesus plus a whole host of others. For this latest and final installment, it’s the turn of Massachusetts’ sonic explorers PALACE IN THUNDERLAND and Scandinavian stoners THE W LIKES. ‘The Second Coming Of Heavy: Chapter X’ sees its official release on September 13th.

Limited vinyl formats pre-order is happening now on Ripple Music webstore with vinyl and digital pre-orders available on Bandcamp. The album will also be available on most major streaming platforms.