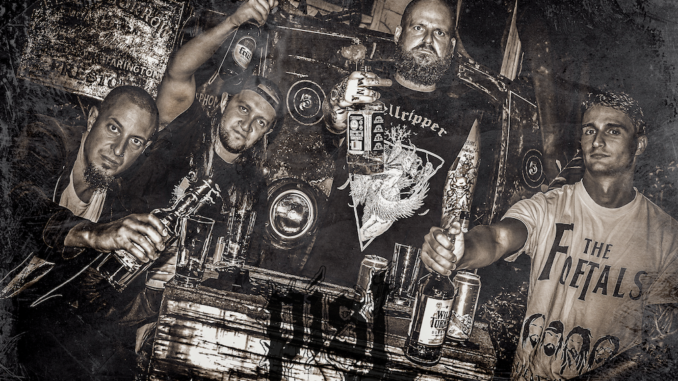 The quartet from Bury, Lancashire reveals the album’s seven tracks display them making a conscious effort to step outside the “stoner doom” genre tags they have acquired.

“Myself and John (guitarist) had loads of ideas for riffs and basic structures however when we entered the jam room with these ideas and the four of us put our heads together it started growing and growing. I feel this record reflects more of our personal influences from shit like Darkthrone to Elder, Orange Goblin to UADA. Musically I feel it’s a step away from the ‘stoner doom’ label we found ourselves with, something we’ve never considered ourselves to be, in our eyes we’re a heavy metal, rock ‘n roll band who listen to a fair bit of Black Metal and Punk. This is really reflecting in the songs on this record from ferocious black metal kicking your head in to chilled psyched out bits that make you feel like you’re fucking floating or something.”

‘Hailz‘ is the anxiously awaited follow-up to the long out-of-print previous offerings from PIST, 2014’s ‘Riffology‘ EP and 2015’s ‘Rhythm & Booze‘ album (APF released both titles on one 2018 disc, entitled ‘68 OFO‘, with new artwork by Dominic Sohor). As with their debut EP and previous album, ‘Hailz‘ was recorded with Chris Fielding (Conan, Witchsorrow, Mammoth Weed Wizard Bastard), this time at Foel Studios.

With today’s announcement of details and the ‘Hailz‘ album artwork, designed by Spooks Rogers at Noktorum, also included is the first single to be unveiled. “Mind Rotter” is presented with the official video streaming below. The song is a multifaceted serving of temporary, lulling melodic moments contrasted with passages of decimating heaviness. It seems devoid of the very elements PIST is adamantly seeking to escape while channeling influences of everything from Warrior Soul to Pantera.

Vocalist David Rowlands revealed the following about the song, saying:

“Lyrically it’s about dealing with my utter contempt of the modern world. Hitting back at the absolute shite we’re fed on a daily basis and not accepting what the media, the government, and people in positions of power tell us is the truth”.