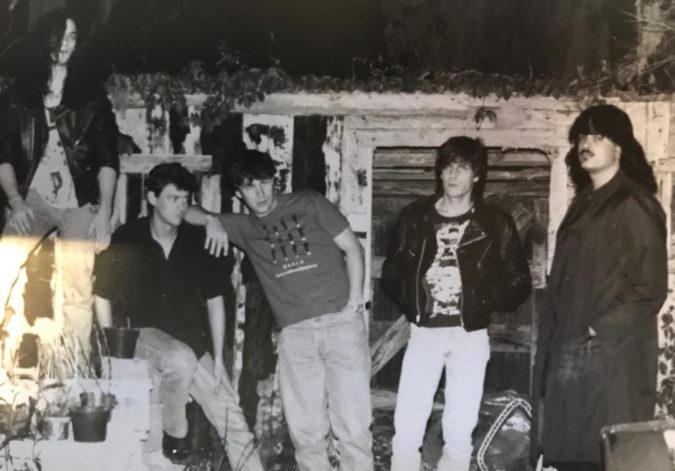 NOLA – The acronym that stands for New Orleans, Louisiana (LA) is recognized around the world for being the “ground zero” location that birthed an entire musical style all its own.

In this case, the locale-specific sound is one founded upon elements of doom metal, punk, and hardcore that is then channeled outward with harshness and aggression. Rife with downtuned, distorted instrumentation, contrasting tempos, and generally abrasive vocals, two particular places are attributed to being the breeding grounds of sludge. Washington state is one of them, where, in 1983, (the) Melvins formed and began laying the groundwork for both the sludge and grunge genres… or did they?

Grunge perhaps, but let us look back to NOLA for a moment, where bands like Crowbar and its previous incarnations The Slugs (1989-1990), Wrequiem (1989), and Aftershock (1988) or EyeHateGod and the pre-EHG Snuffleupagus On Acid, were also exploring the intricacies of heaviness in the mid-Eighties.

However, before them or bands like Soilent Green, Hawg Jaw, Golgotha (pre-Acid Bath), or even (the) Melvins, there was GRAVEYARD RODEO. Briefly known as Bob’s Barbecue, the band’s roots date back to the year 1979 when formed by members Perry McAuley (vocals), Wayne Fabra (drums), Billy Bopp (bass), and Lee Fucich (guitar). As GRAVEYARD RODEO, this foursome pretty much founded an unholy sounding, caustic cacophony created by combining death metal, doom, punk, and hardcore influences within a decidedly southern-infused swamp of sonic excess.

The early days of G.Y.R. (as they are sometimes known) saw players come and then go, and recorded music did not arrive from the band until 1986. They independently issued two demos that year, ‘Cruelty To Animals‘ and ‘Realms Of The Undead‘, though they shared almost identical tracklists. Both featured a different bassist, Tommy Scanlan, alongside McAuley and Fabra, while ‘Cruelty To Animals‘ had a second guitarist. He was none other than a teenage Pepper J. Keenan, who went on to pad his musical resumé with acts Corrosion Of Conformity and Down.

During this period, the band was a regular fixture in the New Orleans area’s venues and GRAVEYARD RODEO developed an insanely dedicated local following. They played often, supporting national acts like D.R.I., Butthole Surfers, and Black Flag at places like Jed’s, Muddy Waters, Rose Tattoo, Tipitina’s, and the V.F.W. Hall on Franklin Avenue. The band’s annual Halloween show became a legendary event for its over-the-top theatrics like members brought onstage in body bags, then rising up covered in blood at the beginning of the set and throwing fish guts into the crowd.

In 1989, G.Y.R. was picketed by a local church group who found one of the band’s flyers so offensive that the controversy was covered by local New Orleans CBS affiliate, WWL-TV Channel 4. Two years later, another demo would surface, ‘Rehearsal 1992‘, containing a pair of new guitarists, Gary Gennaro and Brad Christiana.

In 1994, with three new members – vocalist Mark Brignac, and guitarists Gary Hebert and Jay Gracianette – the band released a sophomore album. Once again through Century Media, ‘On The Verge‘, was an album galvanized with post-hardcore packed sludge, thrash, and doom metal. The record was a rushed job, as Gary Gennaro and Tommy Scanlan had assembled the new lineup to fulfill their recording contract with Century Media, which in several cases meant using songs recorded years prior.

GRAVEYARD RODEO carried on for a couple more years, but by 1997, Gary and Tommy felt the band had become a mere shadow of its former self and threw in the towel. G.Y.R. stayed inactive for a while, then (supposedly) in 2004, an attempt was made to reunite the band, to no result.

In May of 2007, GRAVEYARD RODEO did reunite to perform at that year’s Raise The Dead II and Glenn Rambo Memorial festivals. Rumors circulated that they would record a new album, possibly to be entitled ‘A Hideous Perfection Of Grindhouse Morbidity’. Those plans never materialized and while this time around they never officially disbanded, no other actions have been carried out since. Sadly, just this week came the news that former vocalist Perry McAuley passed away in Evergreen, Louisiana. He was 58 years old and no other details or cause of death is being given at this time.