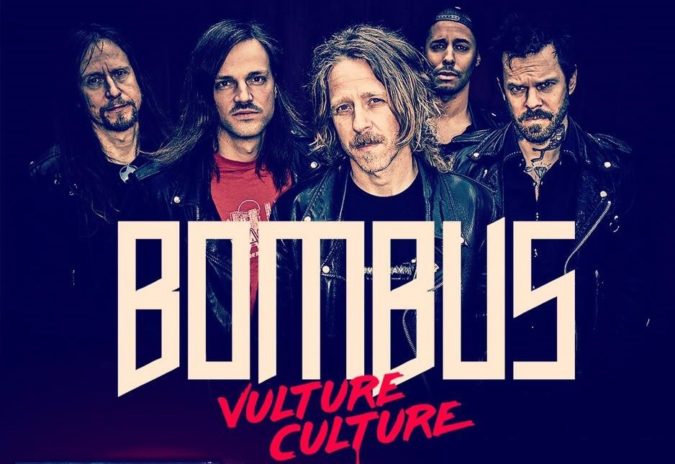 The nine-song ‘Vulture Culture‘ is due to land from Century Media Records on November 15th, while an official video for the new single “(You Are All Just) Human Beings” is streaming below. With a precursory listen, it is quickly revealed that BOMBUS has seemingly cleaned up their overall sound. The grit factor of previous offerings seems slightly reduced, traded for a more contemporary polishing of production standards. A video for the previously shared single, “Mama“, is also included.

‘Vulture Culture‘ is the follow-up to 2016’s ‘Repeat Until Death‘ and was recorded with producer Daniel Johansson, and mixed and mastered by Jens Bogren (Opeth, Katatonia, At The Gates). Today’s announcement and video delivery are accompanied by the album details and routing for a short European road trek in December.

“I think there is really no other band that sounds like us but still we sound like a hundred other bands! If you listen to Vulture Culture you can spot the obvious connection to Black Sabbath and Motörhead but if you listen again you’ll hear traces of Queen, The Prodigy, Tragedy, Pink Floyd, The Partisans, Pantera, ABBA… and it all fits in there! We have never fitted into any particular genre or box and maybe that has made us fall between chairs at times, but if you ask me, that’s what makes us special.”

Find out just how special BOMBUS is by checking out “(You Are All Just) Human Beings” here. ‘Vulture Culture‘ will arrive November 15th from Century Media Records. Pre-order is available now.