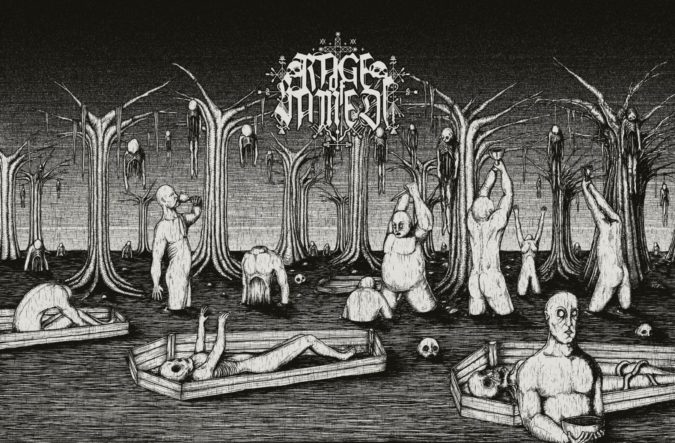 It has been nearly four long, drawn-out years since Germany’s sludge metal powerhouse RAGE OF SAMEDI issued their sophomore, full-length studio album, ‘Children Of The Black Sun‘, in October 2016.

In that time, the band has galvanized and grown to become one of the heavy underground’s brashest representatives for unbridled aggression. With their second-to-none sonic severity, RAGE OF SAMEDI has cultivated a cult-like core of fans, who will undoubtedly be quite ecstatic about today’s news…

RAGE OF SAMEDI announced they will release their anxiously awaited third album, ‘Blood Ritual‘, via Argonauta Records on January 17th, 2020. The band that has shared stages with the likes of Crowbar, Karma To Burn, Dopethrone, and so many others, is poised to strike with their most savage recorded outing yet. Readers need to look no further than today’s unveiling of the first appetizer, the band’s official video to the introductory single and title track, “Blood Ritual“.

Streaming below, the song is a slithering juggernaut of slow-moving sound discharges from the instruments within it, capped off with a hostility predominant vocal. It is one that successfully changes gears and attitude to compliment the unexpected melodic detours in the music bringing it forth. Delivered by means of the performance-like video created by the band, “Blood Ritual” will leave you seeing red once it sheds the life-giving elixir as it mercilessly goes for the throat.

The band shared the following statement about the song saying:

“We’re on fire to release ‘Blood Ritual’ as the title track to our new album, because it’s also the first time everyone in the band is 100% happy with the result. With that first single we’d like to show everyone what to expect from our 3rd album. The process over the last 1 and 1/2 years was a lot of ‘blood, sweat, & tears’ but the fun in developing ourselves and the band was predominate and put us closer together. Special thanks to Gero for giving us all the time and freedom to write and record that beast, ARGONAUTA rules!”

Along with the video presented, Riff Relevant is sharing other album details, including the artwork and tracklist. ‘Blood Ritual‘ from RAGE OF SAMEDI is available on vinyl and digital formats, arriving January 17th from Argonauta Records; pre-order the album [HERE].