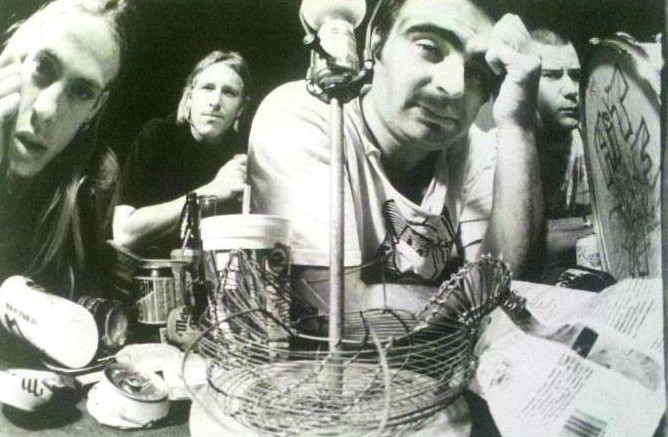 In 1991, the soon-to-explode Alternative Metal and Grunge movements were building steam to burst at their seams.

As is generally the case when something has an allure, this one being a genre of music, it had started to sweep over the land. On the West coast of the United States, Los Angeles was under occupation from fast-forming acts, much like its neighbor to the North, Seattle. Many of these materializing entities of music manifestations were average types, nothing all that groundbreaking or inspiring one to write home about, as they say.

On the other hand, every once in a blue moon, a band would come along and obliterate the mold, remaking it in their own image and style, both. For some, such was the four-piece MUZZA CHUNKA – vocalist Paul Dybdahl, guitarist Dave Teague, bassist Nick Steinberg, and drummer John Oreshnick – a band that made their own way in the world. With elements comprised of punk rock, melodic metal, funk, and a dash or two of psychedelia, the MUZZA CHUNKA output possessed a magnetic pull.

Hypnotic and heady one moment, heaving with aggressive discharges the next, MUZZA CHUNKA was wound up tight and had something to say, or sing… and play. They would begin to do exactly that with their 1992, four-song, cassette-only EP release for Bong Load Records, ‘This Is A Chicken Lamp‘. This was followed by the 7″ vinyl single, “Loaded“, that same year through the same label.

Now on their way somewhere, the quartet quickly developed a rabid following of fans as they inspired more converts to their cause. 1993 would see MUZZA CHUNKA issue another series of releases, this time for the Arista Records’ subsidiary Rowdy Records, including the ‘Meaty Greedy‘ 7″ EP and the “Float” MCD single. It was a bit of an unusual home for the band, as Rowdy Records was known as a predominantly hip-hop label.

This particular year, 1993, still had at least one more official offering from MUZZA CHUNKA, their full-length début, ‘Fishy Pants‘. What an officially formal introduction to this band, too; one chock full of energy, with incendiary riffs and irresistible rhythms. Gritty vocals teetered the line with their unbridled swagger, sometimes stepping over it, discharged laden with aggression. The album seemed to do well, fueling an increasing fan base for the band, which was undoubtedly assisted by the MTV show Headbanger’s Ball playing the video single, “Float“.

However, despite their seeming popularity and rather accessible overall sound, this would be the MUZZA CHUNKA swansong. At some point in time, they would later disband for reasons unknown, surfacing in other notable bands afterward. Bassist Nick Steinberg went on to join The Mexakinz, Mihi Nihil, and other acts. Guitarist Dave Teague, a member of the revered Koro before MUZZA CHUNKA, ended up in The Dickies and can be found currently in Dead Girls Corp. Drummer John Oreshnick would come to be in Fireball Ministry. Not much is known or documented about vocalist Paul Dybdahl.

Word was MUZZA CHUNKA worked on a possible semi-reunion around 2011 or 2012, and even managed to conduct some rehearsals, but it does not appear to have fully panned out. There is a Facebook page for the band [HERE] with activity as recent as November 2019.