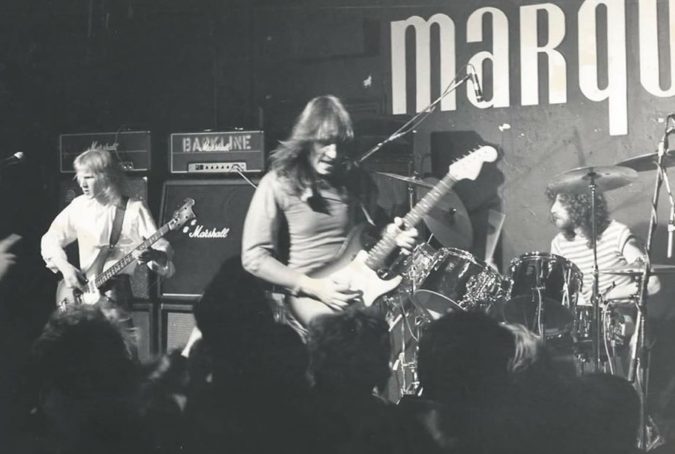 As the Seventies were winding down and near to closing out, a trio of musicians in the Slough region of Berkshire, U.K. were banding together.

It was 1978, when Mike Cooke (guitar, vocals), Terry Pearce (bass), and Ken Revell (drums), adopted the name SLEDGEHAMMER. They could not have picked a better place or time to launch the band, for the influential period that would become known as the New Wave Of British Heavy Metal was dawning. The following year, the three-piece independently issued their first single, one bearing the band’s name as its title, “Sledgehammer“, and its B-side song, “Feel Good“.

The initial release was a truly bare-bones effort, put out devoid of a picture sleeve, but this would soon be remedied. The now-defunct label Valiant Records re-issued the single in 1980, by which time both songs had been well received. The main song “Sledgehammer” was such a fan favorite that it was often played twice in the band’s live sets. In 1980, the self-titled track was re-recorded for its inclusion on the EMI compilation, ‘Metal For Muthas‘, alongside songs from Iron Maiden, Praying Mantis, Angel Witch, Toad The Wet Sprocket, Samson, and others.

By this time, SLEDGEHAMMER had become a recognized act, one receiving praise from several publications, including the influential Sounds magazine. Around this time, new bassist Gerry Sherwin was brought in to replace Pearce, while the band’s live presence was growing. Unlike many bands of the period, SLEDGEHAMMER was finding acceptance in both the heavy metal and punk rock scenes, something many attributed to their more punk style vocal approach.

Sherwin’s time in the trio was short and he was out in under a year, allowing for the return of Terry Pearce. A second single, “Living In Dreams” (w/ “Fantasia“), was recorded and issued with the reunited original line-up. This is where things get dicey for the guys, as they suddenly took a three-year hiatus from recording, effectively stemming their building shot at success. Guesswork and hypothesized reasons abound as to why the band seemingly sabotages themselves at this point. These include everything from a hometown venue they played burning down the night of their show, to possible contractual issues with a record label.

In 1983, SLEDGEHAMMER returns, doing so with a new bassist, John Jay, but it is a wholly different musical landscape by this time. The NWOBHM is in full swing, so much so it is a flooded market and there is a pursuit taking place for a ‘purer’ Heavy Metal sound with less punk influence. Our trio has hardly changed their sound or styling, though, a fact that is evident when they release their first (to this day, only) full-length album, ‘Blood On Their Hands‘, via Illuminated Records.

The 7-song long-player is a diverse record, at best; containing the two songs from the band’s initial self-titled single, with five newer compositions. At times, the album displays nuances reminiscent of The Who, while others channel slightly more Emerson, Lake, & Palmer-ish qualities. These comparisons would seem to imply a taming of the more heavy metal-oriented elements of the music, which is not a mistake to believe, in my opinion. Whatever you choose to take away from the album, there is no denying the overall significance of the ‘Blood On Their Hands‘ release.

Oddly, ‘Blood On Their Hands‘ is re-titled and re-released as ‘Sledgehammer‘ in 1984, though this version does include songs not contained on the original release. A few weeks after the album is issued, SLEDGEHAMMER had set plans in motion to record a live album and to film the show itself. The recording does happen, but neither will see release, although the video portion does eventually arrive… as the ‘Live From London‘ DVD in 2005.