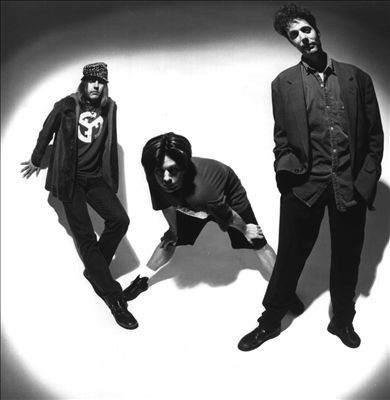 In the later part of the 1970’s, there was a new musical movement beginning to gain footing, one with a very pop-oriented style.

There was more to it of course, elements of punk rock, disco, and electronic music were stitched into what would become known as New Wave. Many bands rose to some prominence in the period, acts like The Cars, Flock Of Seagulls, Devo, Duran Duran, and Los Angeles, California’s Berlin. They gained mainstream success with a string of hit singles, including the chart-topping “Take My Breath Away” from the 1986 film Top Gun, but by 1987 they had disbanded.

Less than a year following the split, two of Berlin’s musicians, bassist and vocalist John Crawford and drummer Rob Brill, had resurfaced in a new band. Joined by guitarist Mark Christian, the L.A.-based trio emerged in 1988, under the moniker THE BIG F.

At the time, Los Angeles music was dominated by the androgynous appearing denizens of glam rock or, as some refer to it, “hair metal”. As is often the case, the tides were changing and there was yet another altered style of musicality waiting in the wings. Very much the antithesis of glam, this music was a type of dark, aggressive rock that played completely against the colorful crowds seeking nuthin’ but a good time.

THE BIG F‘s own good time would get underway once they signed with Elektra Records and released their self-titled introduction in 1989. Though the album did not chart, it was of no matter, for the record did receive a respectable amount of positive press. As good as journalistic praise or support is, there were other factors in play. The singles “Kill The Cowboy” and “Doctor Vine” were given official video treatments and received considerable airplay on MTV’s Headbangers Ball and 120 Minutes shows.

Simultaneously, THE BIG F landed slots on several high-profile tours, like an early trek supporting Soundgarden’s run for the ‘Louder Than Love‘ record. Other live outings included support slots for Bad Religion, Voivod, and True Sounds Of Liberty (T.S.O.L.). In fact, it was this last one with T.S.O.L. that I saw live in Virginia Beach at the time. With THE BIG F’s rather appealing overall sound being reminiscent of everything from Screaming Trees and Paw to INXS, the band received their fair share of spins on the long-running L.A. radio station KNAC, as well.

Apparently, Elektra Records were not so convinced and dropped THE BIG F, who was then quickly snatched up and signed by EMI/Chrysalis Records. The label served as the band’s home for two subsequent offerings: 1993’s ‘Is‘ full-length and the ‘Patience Peregrine‘ EP. Despite both being further fine audio outings for the trio, ‘Is‘ did not sell well and internal tensions between the band members were increasing.

THE BIG F disbanded in 1995, and has remained inactive in the years since. Thankfully, this distinctly unique rock trio left an all too minimal body of work behind. It is said that dynamite comes in small packages and with their two full albums and EP, THE BIG F was as explosive as any.