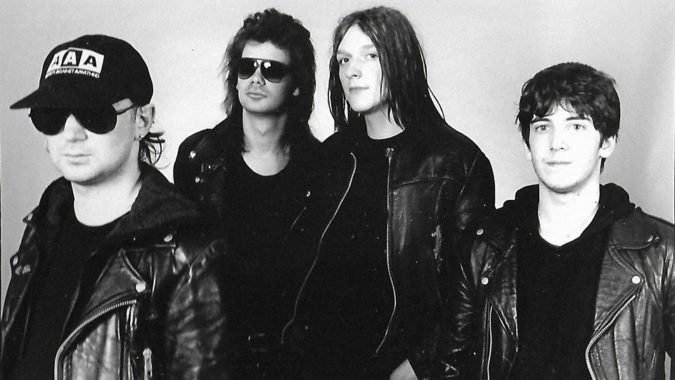 The region in and around Birmingham in the United Kingdom has been ground zero for the birth of many now-well known bands, some of which are legendary.

From Traffic to Black Sabbath, to Wizzard, The Moody Blues, Electric Light Orchestra, and Duran Duran, to Godflesh, the place has provided something for everyone. In fact, the last band named, Godflesh, has connections to today’s spotlight artist, the experimental, industrial-tinged metal outfit HEAD OF DAVID. We’ll expand more on that in a moment, for now, let’s begin at the beginning.

Hailing from the town of Dudley, just a few miles outside the city of Birmingham in the heart of England’s so-called Black Country, Stephen R. Burroughs (vocals), Eric Jurenovski (guitar), Dave Cochrane (bass), and Paul Sharp (drums) form HEAD OF DAVID in 1985. Though it was the mid-’80s, the region’s heavy industry and the depressed economy at the time clearly had an influence on the band’s grimy and oppressive sound, much in the same way it did in the late Sixties on Black Sabbath (then known as Earth). Despite the overall negative circumstances of their location, it did inspire creativity and the following year would see it begin to bear fruit.

HEAD OF DAVID started to make their musical mark with two releases in 1986, the first of them, the ‘Dogbreath‘ EP, arriving in September that year. Right behind it in October came the appropriately titled ‘LP‘ (or ‘CD‘ depending on format) which quickly climbed to No.3 on the UK indie music charts. If the band were to have arrived in the current age, they would be labeled with a wide array of genre tags ranging from noise rock to post-metal. Before ’86 is over, there was a lineup change as drummer Paul Sharp is replaced by none other than Napalm Death member and future Godflesh / Jesu founder, Justin Broadrick.

The music crafted by HEAD OF DAVID is bleak, with a deluge of overwrought guitar, bursts of rhythm machines, and half-shouted vocals. July of 1987 saw them issue ‘Shit Hits The Fan‘, a performance recorded live at some point at the I.C.A. in London. Tailing it was another EP, one a bit more of a minimalist recording, flirting with ambient textures, ‘The Saveana Mixes‘.

By most accounts, it is the 1988 release from HEAD OF DAVID that really put them on the map, the Steve Albini produced ‘Dustbowl‘. It is somewhat a reinvention of the band, one infused with prolific amounts of Americana, while dialing back the more caustic elements of their sound. Seemingly more fluid and making use of material that is emotionally reflective, the album now receives cult-like reverence from fans of the band. These include modern bands like Fear Factory, who recorded a cover of the track “Dog Day Sunrise” for their 1995 album, ‘Demanufacture’.

Unfortunately, the lads were a conflicted bunch, to say the least, and by 1989, internal tensions came to a boiling point. It is quite clear that implosion seemed imminent and while they hoped to sort it out, two sessions from the band’s appearances on the John Peel show are compiled and released as ‘White Elephant‘. Defections began and soon, Dave Cochrane left to join the band God, while Justin Broadrick left HEAD OF DAVID and Napalm Death to form Godflesh. They reunited years later when Cochrane became the touring bassist for another Broadrick project, Jesu.

Stephen R. Burroughs and Eric Jurenovski recruited new bassist Bipin Kumar and soldiered on for one more album, 1991’s ‘Seed State‘. The recording becomes the final album release from HEAD OF DAVID, who remained inactive until a short-lived reunion of the original members in 2009. Since their official demise, HEAD OF DAVID has been an obvious influence on numerous bands over the years, like Pitchshifter, Nine Inch Nails, Rammstein, and the previously mentioned Fear Factory, among others.