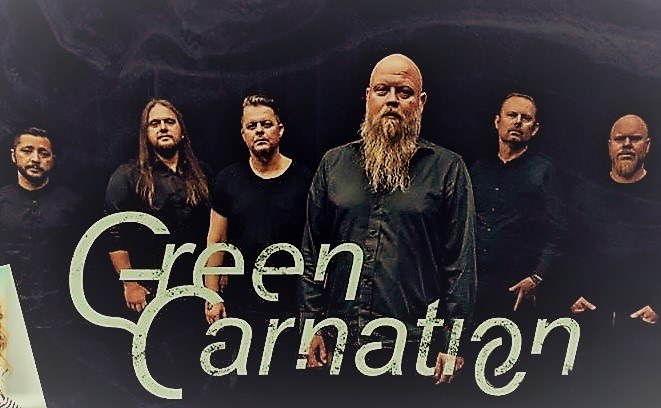 Our origin story today begins in Kristiansand, Norway, in the year 1990, where multi-instrumentalist Terje Vik Schei (a.k.a. Tchort) founded a band believed to have taken its name from an infamously controversial novel.

GREEN CARNATION also consisted of vocalist Richart Olsen, guitarist Christian “X“ Botteri, bassist Christopher “C.M.“ Botteri, and drummer Anders Kobro. The quintet soon recorded a demo, ‘Hallucinations Of Despair‘, a much heavier, more death metal / thrash oriented styling than the band would later become so well known for. Before much else can be done, the band was put on hold, as Tchort joined Emperor that same year. Playing on the ‘Darkside Eclipse‘ album, Tchort then went on to join Satyricon and Einherjer, while needless to say, GREEN CARNATION remained inactive for several years.

It would be 1998 before most of them – with the exception of Olsen and Kobro – were able to regroup and begin recording a proper album. Replacing the two previous members in the new line up for their first studio album was singer Vibeke Stene (Tristania) and drummer Alf T. Leangel (real name: Alf Tore Rasmussen). There were other differences, as well; the biggest of them being the overall stylistic direction of their music. Having shed the death metal elements of their earlier demo, their first studio album is a melancholic take on progressive doom with both male and female vocals.

‘Journey To The End Of The Night‘ is released through Germany’s Prophecy Productions in 2000, and quickly finds favor with fans of Gothic doom. With epic, over-the-top compositions and rife experimentation into aspects of psychedelia, this first official release from GREEN CARNATION is now revered as a historic milestone.

In rapid succession came the follow-up sophomore album ‘Light Of Day, Day Of Darkness‘, once again via Prophecy Productions (The End Records in the U.S.) in 2001. Considered a solo album from Tchort, he was re-joined by drummer Kobro (Carpathian Forest) for the recording. Other guest players who contributed to the recording are vocalists Kjetil Nordhus and Jan Kenneth Transit (In The Woods…, Naervaer), bassist Stein Roger Sordal, guitarist Bjorn Harstad, and keyboardist Brent A. Moen. With a single, rather lengthy track, “Light Of Day, Day Of Darkness – Parts I & II” is another soul rendering masterpiece, to be sure.

The lineup of players from the second GREEN CARNATION returned as full-time members of the band for its next album, 2003’s Season Of Mist offering, ‘A Blessing In Disguise‘. Once again, the collective of musicians more or less reinvent themselves yet again as this third release is clearly a more rock-oriented album. The intensified, more upbeat, and uptempo type of song-crafting continued upon studio album number four, ‘The Quiet Offspring‘. The 2005 Season Of Mist / The End Records album also marked the arrival of two new players within the band, as keyboardist Kenneth Silden and guitarist Michael Krumins replaced Bernt Moen and Bjørn Harstad, respectively.

Many longtime fans of the group, as well as journalists and critics, believe ‘The Quiet Offspring‘ is their most commercial sounding release. In the two years between those more recent recordings, GREEN CARNATION issued ‘The Trilogy‘ Box Set (containing the first three studio albums) and the Metal Minds Productions ‘Alive And Well… In Krakow’ concert home video, both in 2004. Following the 2005 album, drummer Kobro was let go and his replacement, Tommy Jackson (Jacksonville), was brought in.

There were other changes afoot for GREEN CARNATION, as guitarist and bassist Stein Roger Sordal took over as lead vocalist. He made his singing debut via a new EP for Profound Lore Records, one that he wrote and performed the title song of by himself, ‘The Burden Is Mine… Alone‘. The band showed great confidence in the new guy as well, as Jacksonville was given songwriting credits and he provided much of the lyrics used upon the rather stripped-down EP.

The minimalist, down to a bit more bare-bones type of approach to the EP was utilized again on the next release to arrive, Sublife‘s 2006 offering, ‘The Acoustic Verses‘. The fifth studio album possesses the band’s tried and true knack for evolving and undertaking stylistic changes. Playing all acoustic instruments, the now seven-member band showed off a softer, warmer style while retaining the progressive elements established since their debut.

In late 2006, GREEN CARNATION recorded their second live concert at a rather interesting location, under a nearly 100-foot-tall dam in the Norwegian mountains. ‘The Acoustic Verses‘ was played in its entirety, along with other select songs. This performance was issued as the band’s second home video and was released in February 2007, as ‘A Night Under The Dam’ and ultimately, it was a bittersweet item. In August of that year, Tchort announced that, due to a poorly organized North American tour and subsequent financial and motivational losses, this incarnation of GREEN CARNATION had disbanded.

At this point in our tale, it seems that a fantastically talented collective came, created some amazing music, and then was gone. They did remain inactive, as far as the band goes, until 2014, when an announcement informed fans of GREEN CARNATION‘s intent to reunite for a second version of ‘A Night Under The Dam’ in July 2014. In 2018, that concert film was released in unison with a documentary, the audio/video package from Prophecy Productions, ‘Last Day Of Darkness’.

In September of last year, GREEN CARNATION announced they were back, newly reformed and bringing their first new music in 14 years with them. ‘Leaves Of Yesteryear‘ will arrive on May 8th via Season Of Mist. In conjunction with the album announcement, a new official video for the title track, “Leaves Of Yesteryear” – directed by Costin Chioreanu – is shared below. You will also find the Niklas Sundin created album details and band personnel rundown.

“We are super-excited to finally release new music and our first-time-ever music video. Costin did a great job to interpret the moods and lyrics of the song. We think the viewers will find new meanings in the visual side of the song and discover new elements for each time they see it. Enjoy!“