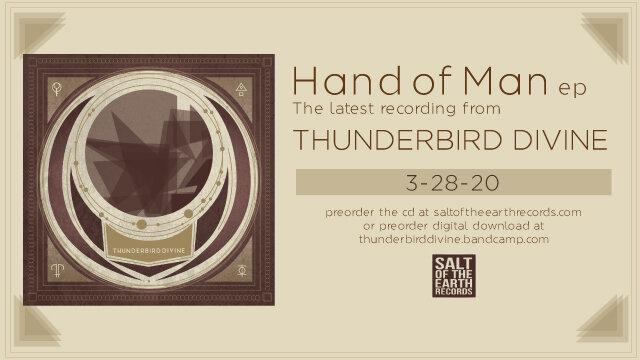 Psychedelic Rock Collective THUNDERBIRD DIVINE shares their tribute to The Yardbirds’ “Happenings Ten Years Time Ago” ahead of the upcoming release of a three-song single ‘The Hand of Man‘.

The Philadelphia-based space hippies of THUNDERBIRD DIVINE will put forth their second release, ‘The Hand of Man,’ on March 28th via Salt of the Earth Records, alongside a documentary of the recording sessions.

“We absolutely loved what Thunderbird Divine did with ‘Magnasonic’, and ‘The Hand of Man’ just keeps the ball rolling,” says Scott Harrington, president of Salt of the Earth Records. “These guys are at the top of their game when it comes to songwriting and arrangements.“

A companion recording, a cover of The Yardbirds’ “Happenings Ten Years Time Ago” is presented below in video format and is available for free download via the band’s Bandcamp site. “We tracked and mixed that one ourselves,” says guitarist / vocalist / multi-instrumentalist Erik Caplan. “We relate to The Yardbirds more and more as we continue writing. That band was stuck between being known as bluesy rock act and a progenitor of psychedelia and studio experimentation. This cover is a tribute to their brilliant work.“

Primary tracking for the three-song ‘The Hand of Man‘ single was done at Philadelphia’s Retro City Studios, with Joe Boldizar handling most of the engineering duties. Additional layers were added at Brooklyn’s Cottage Sounds Unlimited, with Charles Newman providing his prowess on various synths and keys. “Working with the guys was a total pleasure,” says Boldizar. “They showed just the right amount of focus and did some fun experimenting with the tracks.“

‘The Hand Of Man‘ Tracklist:

This release finds the band committed to its rock and psychedelic roots with a less densely embroidered approach to layering and instrumentation.

“For ‘Magnasonic’, we really went all out in the tracking process, just creating several sonically nuanced elements in every track,” Caplan says. “We built those layers in the studio as we worked. For ‘The Hand of Man’ sessions, our orchestration and instrumentation, from the ladies singing backups and the electric sitar, to the Wurlitzer organ, was fully realized before we set foot in the studio.” The result is a focused, streamlined trio of songs true to the band’s love of both riff-rock and trippy experimentation.

This theme follows through the release’s visual elements, as well. “For this recording’s artwork, I started with a synthetic cubist design and built elements out from there,” says bassist / multi-instrumentalist / art designer Adam Scott. “I intentionally departed from the vibrant color palette used on ‘Magnasonic’ and focused more on layers and space.“

Additionally, THUNDERBIRD DIVINE will make available a 17-minute visual record of its recording process in the form of a documentary compiled by close band friend and fellow musician, Jamie Victor. “I love the guys, love the band and love making videos,” Victor explains. “It all lined up. I consider these guys family, so it was my pleasure to make this for them. They didn’t even know I was going to do it.“

‘The Hand Of Man‘ is available on March 28th. Pre-order now: