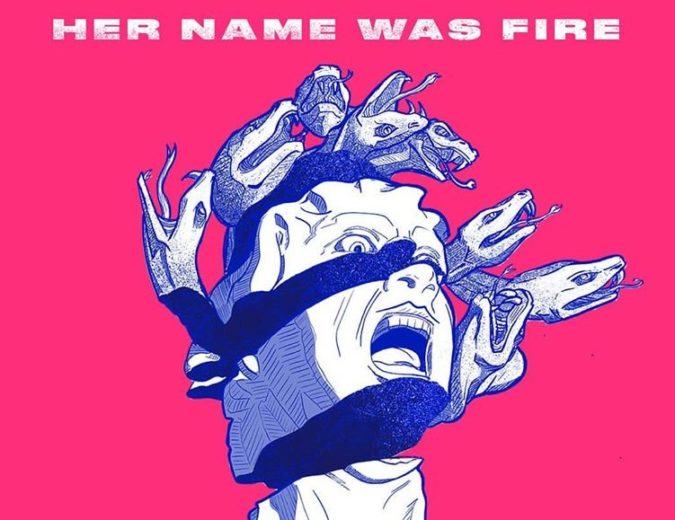 Lisbon, Portugal’s duo of deliberate desert rock fused with funk, HER NAME WAS FIRE, are preparing to release their anxiously anticipated sophomore album.

Titled ‘Decadent Movement‘, the 11-song long-player is set to arrive April 3rd from Raging Planet Records. The album, despite its happy-go-lucky aural aesthetics, is said to be one reflecting a realization of human impermanence while criticizing the artificiality and frailty of human beings in the modern era. That sounds rather deep and thought-provoking, does it not?

The true beauty here is the way those existential complexities hide in plain sight, wrapped in the feel-good music of this duo. Yes, the duo in HER NAME WAS FIRE, guitarist and vocalist João Campos, and drummer Tiago Lopes, are two men that sound like ten when they play. Between them, they craft an irresistible blend of riffs, rhythms, and grooves that will appeal to fans of bands from Queens Of The Stone Age to Quicksand.

Formed in 2016, HER NAME WAS FIRE elicited a lot of hype during their first year active. Plans were set into motion with the pair’s initial effort, 2016’s ‘EP I‘. The following year, it seemed everything was justified when these rockers set loose their first full-length album in 2017, ‘Road Antics‘, reviewed [HERE] at Riff Relevant. Fueling extensive critical acclaim, and the adulation of fans at the same time, their upward trajectory was rocketing ever higher.

Three years have now passed and all indications are Campos and Lopes have doubled down on the fundamentals of their music-making. You are able to judge this for yourself today, as we present the duo’s newly unveiled lyric video for the single “Allure“. Find it below with two other recent singles, “Another Rodeo” and “Specter“, along with the album artwork and tracklist.

HER NAME WAS FIRE ‘Decadent Movement‘ arrives April 3rd and will be available on CD through Raging Planet Records and distributed digitally by LEVEL: UP Distribution.