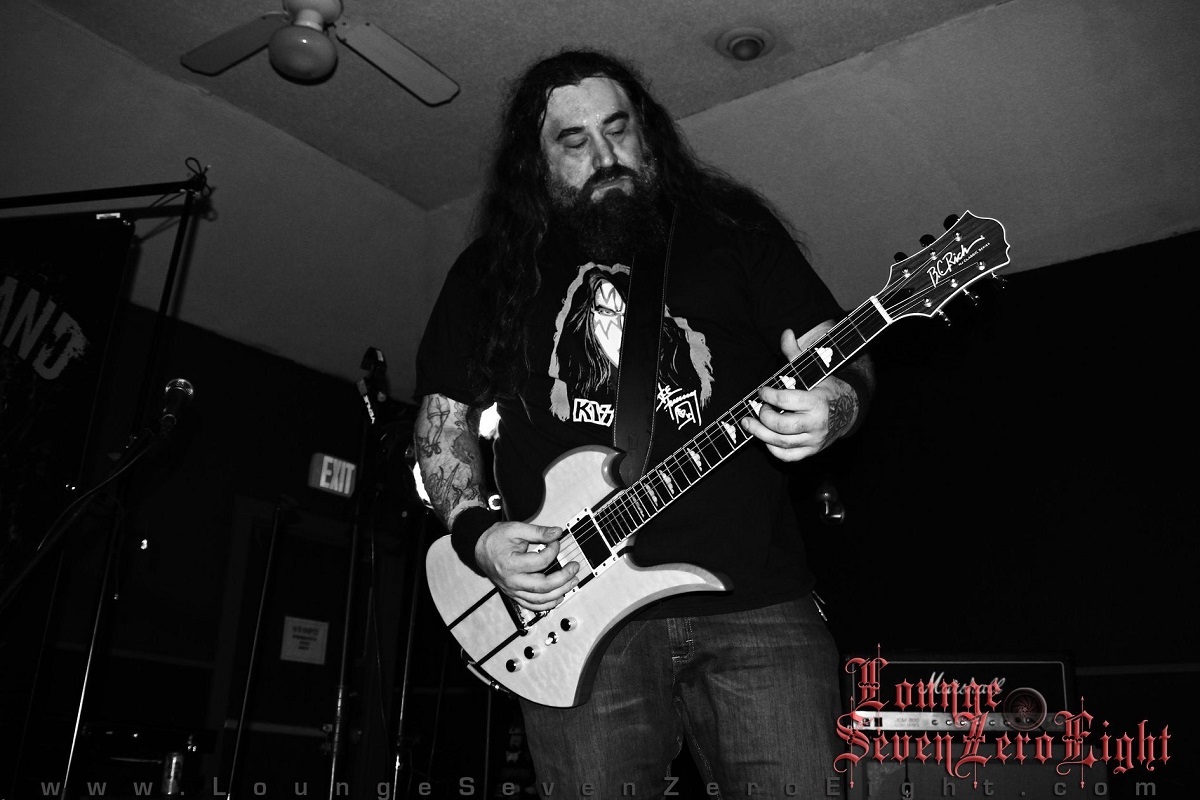 Western Massachusetts is a veritable citadel of heavy music acts. It’s like there’s a county arsenal for them. I’ve stumbled upon at least 36 of them in only the last several years. There are more than a few that stand out due to not only their music but some of the personalities belonging to the band members. CONCLAVE is one of those bands and Chris Giguere is most assuredly one of those personalities. Larger than life (probably intimidating to some), confident, yet surprisingly reserved, and more humble than one might suspect. Plus the all-important sense of humor. Oh, and he plays guitar, too.

Welcome to the second piece in the Gear Assembly! Rock on…

In 1986, after hearing James Hetfield’s solos on both the songs “Master of Puppets” and “Orion“.

When I first was able to get a guitar in 1989; my influences when I started playing were Ace Frehley, James Hetfield, Jeff Hanneman, and Spike Cassidy (D.R.I).

I guess, right now, is a song I / we wrote in CONCLAVE that will be out on a yet to be titled new full length, to be recorded in early May. The song is titled “Dawn of Days“, which the premise is about the beginning of the end, and incidentally, that’s the state of the world right now.

I use pretty much the same as my live setup. Obviously, effects and guitars may change, it depends on what works in the studio better and what sound I’m trying to achieve.

Live is easier, you just want to crank up and blast, but in the studio when you’re looking for a rich, thick tone, that doesn’t always work.

Before every show I’ve ever played, I’ve listened to the KISS ‘Destroyer‘ album and Iron Maiden’s ‘The Number Of The Beast‘. I also may have a bottle or two of adult sodas to calm my nerves.

I’m very much an improv player when it comes to leads/etc. So, why not come out and see?

Well, I have a broad range of influences and my record collection is rather eclectic. My guitar tone is earth-shattering and I have a tight right hand for rhythm. My leads tend to be melodic and have hooks (think Adrian Smith and James Hetfield).

I pretty much play mainly Gibson. I always have, they just feel right.

Also, I pretty much only play Marshall amps. I have some of the best amps ever made and have played a lot of others, and I always prefer Marshall. I think of the guitar tones of the people I’m influenced by and it’s all Marshall.

I don’t have any sponsorships, though I think I should, because I’m great.

My amp, it’s a fire-breathing monster. It literally vibrates stages. It just has it, I can’t explain it, every time I play through it, it brings a smile to my face.

I obviously work on guitars.

I also design and build guitar effects pedals under the name BLACK LODGE AUDIO. I’ve made pedals for my bandmate Jerry (also of Warhorse) and my other bandmate Jeremy (Conclave, Desolate). I’ve also built a pedal for Terry Savastano (Warhorse, Come To Grief).

I can’t think of any emerging artists that influence me. There are bands I dig, but they don’t influence me or my playing.

Practice and have fun. Fun should come first, but if you want to get good, you need to practice.

Well, I socially distance myself from people normally, so that’s nothing new, but even more so now. I’m staying away from people even more, which I didn’t think was possible.

Our shows have been cancelled and work has been exceptionally slow.

Riff Relevant:  If you could have any music gear you wanted, what would be your ideal setup?

A wall of Marshalls and all the Gibson Les Paul guitars I can get my hands on. I’d also like an ’84 Explorer like the one Hetfield played in the ’80s. Gold Tops, a ’78 Les Paul custom silverburst, and a silverburst Flying V.