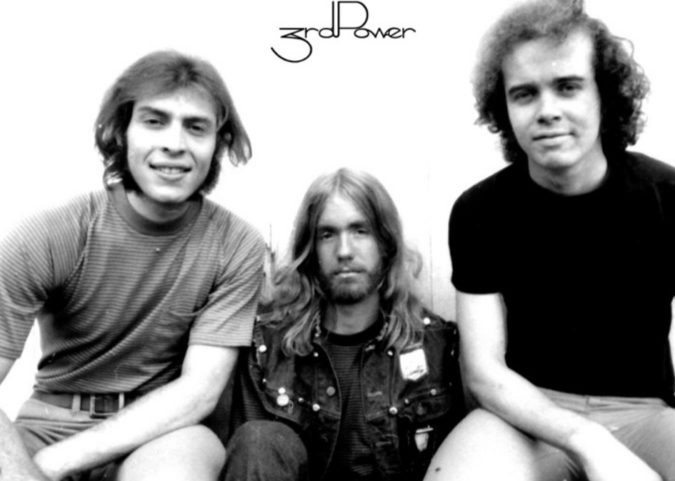 The Sixties were coming to a close and while the coastal U.S. music scenes were getting most of the attention, there was a movement of sound taking place in the Motor City (Detroit, Michigan).

Acts like Frijid Pink, MC5, Rare Earth, The Frost, and SRC (The Scot Richard Case) were fueling a rather localized rock and roll revolution all their own. Yes, the city that gave the world the greats of Motown was on the move once again and, for a brief period, THE THIRD POWER (also known as 3rd Power) would participate. The trio was formed in 1967 by Drew Abbott (guitar, lead & backing vocals), Jem Targal (bass, lead vocals), and Jim Craig (drums) after each had spent several years in the Detroit scene.

At a respectable speed of acceleration, THE THIRD POWER emerged as a fan favorite of the local club circuit, thanks to their bone-jarring sound. It was rooted in an airtight, dense bottom end and the fiery guitar fury of Abbott while offering different types of vocals, depending on the song. Once again, Abbott was partly responsible for this, along with Targal, as the two transitioned between hazier, ethereal ones or unhinged, angst-driven deliveries. Targal was very much a madman on the bass too, while Craig moved effortlessly from subtle snare rolls to all-out cymbal assaults among his repertoire on double kit drums.

Displaying no restraint in the live setting, they were soon being courted by labels seeking to sign them, eventually going with Vanguard Records. 1970 proved to be their year as they released the Sam Charters-produced, all original 9-song studio album ‘Believe‘ that year. Though the band drew many comparisons to Cream, such associations are minimal at best, and there was no doubt THE THIRD POWER had something going on. Tragically, others would not recognize this at that point in time, and the album made only modest sales at best.

A likely disappointment to the band and their fans for Detroit were quite fired up about the slightly psych-tinged, utterly multifaceted rock of THE THIRD POWER. That disappointment was compounded once the heads of Vanguard Records actually heard the finished album. Almost immediately, the band was dropped from their roster, deemed too heavy for the label’s intended musical direction. Of course, this resulted in no promotion of the record and almost nil distribution, yet consequently made it an instant collector’s item.

There was no radio airplay, no charting in the Top 40 FM markets, and basically no recognition outside of the Detroit environs. Despite all the home-based love for THE THIRD POWER, these events deflated the trio and they disbanded by 1971. Jem Targal briefly pursued a career as a solo artist, while Drew Abbott joined the band backing Bob Seger in 1972 when Seger wished to give up guitar playing responsibilities. When Bob Seger decided to reinvent himself by starting the Silver Bullet Band in 1974, Abbott was the only band member asked to stay on.

Today, THE THIRD POWER is a rare and obscure gem in the annals of U.S. rock history, while their one and only album, ‘Believe‘, is a most remarkable wonder. It’s one that stands on its own considerable merits and on Record Store Day in April 2016, the album was reissued in two versions by Light In The Attic Records on their Future Days Recordings imprint. First as a limited edition (2,000 copies), red vinyl LP with a download card for bonus tracks, and second on CD with the original album supplemented by eleven bonus tracks.