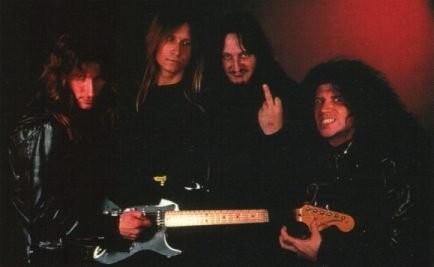 Today’s homage begins in 1991, where Savatage had reached the conclusion of that year’s tour supporting their ‘Streets: A Rock Opera‘ album. After six studio albums and other miscellaneous releases, successful tours, and more, singer Jon Oliva left Savatage. As this news began to make the rounds, it fell upon the ears of guitarist Chris Caffery (Spirits Of Fire, Trans-Siberian Orchestra, Doro), who called Oliva up. Caffery, who had been a touring guitarist for Savatage previously, talked to Jon for hours, and eventually, they talked themselves right into forming a new band, DOCTOR BUTCHER.

Savatage recruited a new singer, Zachary Stevens, as Jon Oliva continued to work on the band’s next album (‘Edge Of Thorns‘) with his brother, band guitarist Criss Oliva. At one point, Savatage asked Caffery to rejoin them but, in a display of loyalty and confidence in what they’re doing, he rejected the offer and continued contributing to DOCTOR BUTCHER. For nearly most of that year, 1993, Jon and Chris stayed busy fleshing out their songwriting in hopes of an eventual recording.

Interestingly, DOCTOR BUTCHER was on the Atlantic Records roster, as was Savatage, but this soon changed as the outcome of a tragedy was imminent. On October 17th, 1993, a drunk driver crashed into Criss Oliva‘s car, killing him instantly and put an end to the life of one of the best, stand-out players to ever pick up a guitar. The press didn’t help the situation in any way either, opting to go the negative route with bad press over Oliva’s health (he was still recovering from a drug and alcohol addiction he had during the late ’80s and early ’90s). In turn, this lead Atlantic Records to make a decision between DOCTOR BUTCHER or Savatage and the label chose the latter.

The debut was picked up by Germany’s GUN Records for a release in Europe but unfortunately, it did not receive a release in the U.S. In hindsight, this was almost unfathomable and surely robbed countless metalheads of discovering this fiery debut for themselves. Despite being let down by a non-U.S. release, plans were made with Edel Records for a second record with the tentative title, ‘The Good, The Bad, And The Butchered’. It was believed that the sophomore album was recorded, but due to contractual obligations, it has never been released.

A compilation of the band’s demos was released in 1999 by Crook Records and is streaming below. In 2005, Black Lotus Records re-issued the self-titled album with a bonus disc featuring one new song (“Inspector Highway“) and four tracks taken from the demo CD.

Now, with an update comes news that the 1994 eponymous debut album, ‘Doctor Butcher‘, is now available re-issued on vinyl for the first time ever! As part of their “BlackBeard” series, Jolly Roger Records are offering a vinyl LP format – with the first 100 copies on colored vinyl – licensed by Sony Music Entertainment Italy. This first-time-ever LP offer of this intense milestone from DOCTOR BUTCHER arrived June 20th and can be purchased [HERE].