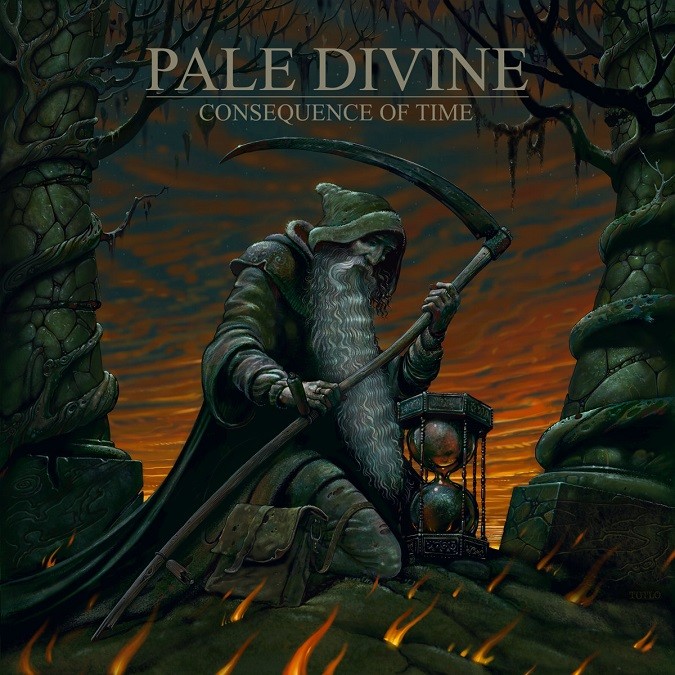 When I think of pure, traditional Doom, PALE DIVINE immediately and always comes to mind. For 25 years now, guitarist and vocalist Greg Diener, drummer Darin McCloskey, and a host of bassists (a spot now nicely filled by Ron ‘Fezzy’ McGinnis) have brought forth records of unwavering high quality. Crushing riffs with lead guitar work on a virtuoso level; haunting, deeply-registered vocals, and pulsating, ominous rhythms are all present in spades.

Every one of their records has followed this formula and always with stellar results. So, when thinking of a band of this tenure that is also well-loved for the steady course they’ve plotted, one of the least likely thoughts to cross the mind would be of change. Yet, the winds of such are gusting all over the terrain of music that is PALE DIVINE‘s ‘Consequence Of Time‘.

Somewhere in 2018, guitarist and vocalist Dana Ortt enters the fold. Well, kinda. Diener and McCloskey had already teamed up with him in the excellent Beezlefuzz and released two nifty records before Ortt closed up shop. Be it by design or sheer circumstance, he joins PALE DIVINE, and things blow wide open.

Yes, ‘Consequence Of Time‘ is definitely a different beast than all output before it. The first three tracks (see tracklist below) contain lots of 70’s hard rock groove / harmonies and alternating vocals between Diener‘s lower register (though not as low as in the past), and Ortt‘s clear, very melodic, and chorus friendly style. There’s a loose jam-inspired feel, that I daresay is fun as well.

With the first portion of the record clearly bearing the mark of the band’s newest addition, songs four to six shift back in a sensible (you could almost say fair) balance to doomier climes, while still sharing vocal duties. It’s a really nice, smoothly devised reversal of dominance. Everybody gets their moment, and the McCloskey / McGinnis rhythmic backbone holds it all together, easily adapting to what the song needs to put it over with the proper vibe intact.

With only two ditties left to cover, we get what may be the biggest surprise of all, song seven; a NWOBHM-inspired, traditional metal song unlike anything the band has done before. And it works! As for the eighth and final offering from the record – well, I’ll leave you to check that on your own. Hell, a little mystery never hurts.

PALE DIVINE could have easily rested on their laurels; I’m pretty damn sure that another excellent album following in the usual modus operandi would have been loved and accepted. But, thankfully – they did not. They’ve actually dared to challenge a genre in which they are a huge part of, and very handily won. And why not? Trouble did it decades back with ‘Manic Frustration,‘ which also happens to be my favorite record from them.

Is ‘Consequence Of Time‘ doom metal, 70’s-inspired heavy rock, or even something else? That doesn’t even remotely matter, because at the end of the day, the listener has one helluva powerful slab of tuneage in their grasp. Outstanding, I say!