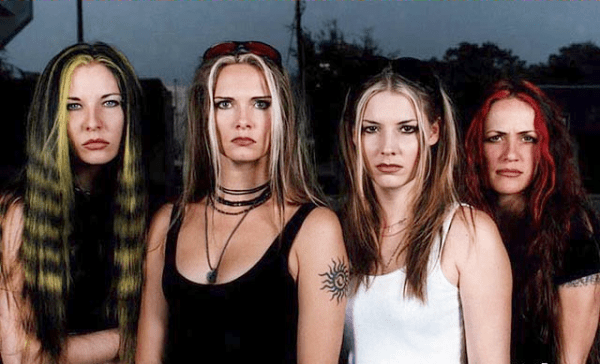 The origin of the Swedish nu-metal band DRAIN (later evolved to DRAIN STH due to confusion with another band using the name) really began back in the late Eighties.

It began with guitarist Flavia Canel and drummer Martina Axén and the early punk band they formed together, Livin’ Sacrifice (not to confused with U.S. thrashers Living Sacrifice). A string of bands followed from there, including Aphrodite. When that folded, the pair began Rag Doll with bassist Anna K. (Anna Kjellberg) in 1991. Eventually, the singer for Rag Doll departed, and the remaining trio – Canel, Axén, and K. – joined forces with former NecroNancy guitarist-turned-vocalist Maria Sjöholm. It was not long after this Rag Doll secured a record deal with MVG Records in 1993, upon which they re-christened themselves DRAIN. The following year, the band released their debut recording, the four-song EP ‘Serve The Shame‘.

As DRAIN, their music became much more metal-oriented, heavy grunge with plenty of aggressive elements yet melodic and psychedelic nuances. The band quickly began to grow in popularity in their home country of Sweden while work began on a full-length studio album. DRAIN released the 9-song ‘Horror Wrestling‘ in 1996, and almost immediately the band blew up, with comparisons often drawn to another popular band, Alice In Chains. With the massive guitar riffs of Flavia Canel driving them, the songs were deliberately mid-tempo and gloomy. They exuded creepy elements, helped in part particularly by Maria Sjöholm‘s haunting vocals, often bolstered by backing vocals from drummer Martina Axén. Her drumming and Anna Kjellberg‘s bass work were the adhesives that held it all together.

For the U.S. market, DRAIN adopted the STH initialing – for their home city of Stockholm – due to another active band with the Drain moniker. For the first four months of stateside ‘Horror Wrestling‘ album sales, to keep the focus on the music the band purposely chose not to release any photos of themselves. It worked too, the album became hugely successful with music fans and resulted in official videos for songs “Crack The Liar’s Smile” and “I Don’t Mind“. Their popularity was cemented once DRAIN STH were included on the second stage North American roster of 1997’s OzzFest Tour and tours with Type O Negative, Corrosion Of Conformity, Godsmack, Black Sabbath, and others followed.

Two years after its initial release, Mercury Records’ subsidiary The Enclave repackaged and re-released ‘Horror Wrestling‘ with bonus material (including a quarter-speed remake of Motörhead’s “Ace Of Spades“). 1999 was another big year for DRAIN STH once their sophomore album, ‘Freaks Of Nature‘, was released. Many changes had clearly taken place and the album reflected this, from its altered band logo to being much better produced and slightly more commercial styling. Three of its songs displayed co-writer credits; with two songs, “Simon Says” and “Right Through You“, co-written by Max Martin – the Swede behind hits for Britney Spears, Backstreet Boys, Maroon 5, and several others.

Another song, “Black“, was co-written and played on by the riff lord Tony Iommi, who also wed DRAIN STH vocalist Maria Sjöholm in 1999. Another smash album, another well-attended, second stage OzzFest run in ’99, plus a U.S. tour with Black Sabbath and Godsmack were definite high points. Others included Metal Edge magazine’s 1999 Readers’ Choice Awards, where they were voted “Female Performers Of The Year” and “Most Underrated Band,” while the single “Simon Says” was used as the entrance music for Extreme Championship Wrestling persona Simon Diamond.

I saw DRAIN STH with Megadeth and Clutch in 1999, one of a handful of shows the three bands did together at that time.

Yet, for every high, there is a low, and eventually, things turned in the other direction, as internal band conflicts increased. In early 2000, a major restructuring at Mercury Records resulted in the band being dropped from their label. Compacted with the band’s inner turmoil, this spelled the end of DRAIN STH. Despite their popularity, they called it a day soon after.

In the years since DRAIN STH disbanded, Martina Axén and Anna Kjellberg switched to guitar and formed the band SuperFix. It was rumored that Flavia Canel was also part of the band, but due to contractual issues, this can’t be confirmed. We can say that Flavia Canel was in the New York-based Another Day and the popular Swedish band Blowsight.

Anna Kjellberg had recorded or toured with bands Hanzel Und Gretyl and Opiate For The Masses, and was hand-picked by Al Jourgensen for a 2006 Revolting Cocks tour.