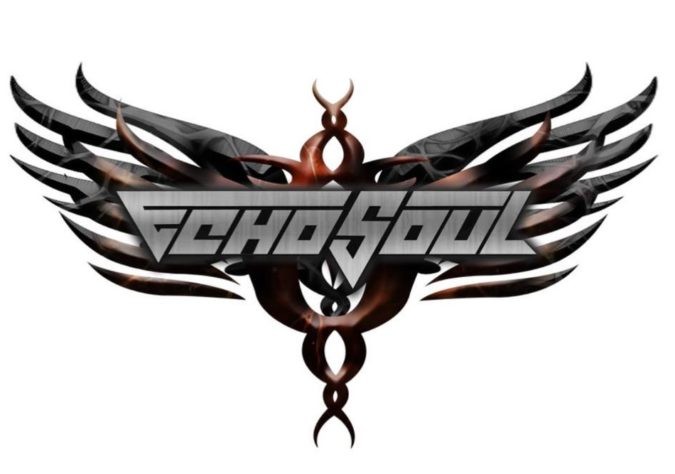 In the vein of such great bands as Helstar, Symphony X, or Kill Ritual comes Fort Wayne, Indiana’s ECHOSOUL and debut album, ‘The End Of Darkness’.

Formerly known as Apparition, the 2019 manifestation of ECHOSOUL was the realized vision of one man, multi-instrumentalist songwriter Guy Hinton. Hinton composed all music and lyrics, finding inspiration in the process of overcoming personal bouts of depression and self-defeat. ‘The End Of Darkness‘ was mixed and produced by Artem Lefimov at Red Ghost Studio, Kyiv, UA, and Noah Hirschy.

A variety of musicians assisted in this realization, some well known and others on the rise. Guy Hinton plays lead, rhythm, and bass guitar, while other players contributing their talents here include: Samus Paulicelli (drums), Dmitry Lisenko (bass), and guests Nik Nokturnal (guitar), Garrett Peters (guitar), Giampiero Presilli (guitar), and Artem Lefimov (bass, guitar). For the vocals on this album, the dynamically multifaceted Rob Lundgren (Reveal, PowerDrive, The Midgard Project) handles the lion’s share, but two of the tracks feature Tim “Ripper” Owens (Spirits Of Fire, ex-Judas Priest).

Over the span of seven songs with a little under 43:00 minutes of total running time, the contents of the first official outing from ECHOSOUL are poignant, to say the least. Clearly, there are sinewy themes present beneath the surface of each number, serving to stitch one to another. With these ever-present connections of commonly experienced, universally recognized struggles established, one thing remains the ever-present, sought outcome. Don’t expect me to reveal it here, for it can differ from person to person, assuming each can first relate to the negative aspects of life identified within each composition.

Right out of the gate things explode with the rapid discharge, guided gallop of “Where Echoes Go“, one of the songs featuring Tim “Ripper” Owens. The rhythmic actions taking place are what first drew my attention, from the ceaseless, smoldering guitars to the rhythm section backing them up. Such a song as this, one providing a sense of familiarity, be it slight or otherwise, has a tendency to work out well for all involved. Owens drives this notion home once he begins to put his vocal stamp all over “Where Echoes Go“.

There is power metal, and then there is power in metal, and both are delivered in no short order with “Crucible Of War“. Forged stronger than iron and reinforced with pure determination, this thunderously chugging construct winds its way along as Lundgren weaves its lyrical narrative. One of the enthralling elements of this song is the incredible guitar performances, especially the fuel-injected thrashing that takes hold around the mid-way point.

Owens returns to commandeer the mic upon the earliest rudiments of “Elemental“, a song possessing an altogether different feel to it, in comparison to others. With striking textural contrasts being adeptly explored in moments of weighty heaviness and lighter melodic ones, it is also the ideal representation for mankind. Our dual nature, our inherent ability to do good or to do bad, right or wrong, is juxtaposed and measured here.

Truth is, that process is very likely to be taking place throughout this album, whether identified or not. These songs seem to welcome and allow for this process to take place, serving like scales to such measurements in ones like “Melody Of Misery“, “The Alchemist (Man Of Madness)“, or “Cobwebs Of The Mind“. Musically, there are soaring high points reached, yet offset by plummeting descents, each is sometimes rather intense, but occasionally not so, as well. For you traditionalists out there, make sure to delve into “The Alchemist (Man Of Madness)” for it is most definitely one of the more aggressive tracks on the album.

The record-ending “Hangman (A Roman And The Cross)” is perhaps the most ambitious song of the seven. Running over 10-minutes in length, there are large stylistic expanses of audio served both in the music and the vocals. The former includes points of melodic, mid-tempo thrashing, somewhat symphonic passages, brief respites of psychedelia, and a couple of points where savage breakdowns, ala Morbid Angel, take place. The latter sees Lundgren pushing his own abilities at the same time.

I’ll wager that upon one complete start-to-finish playing of this album, many of you will itch to replay it again, right then and there… and you should. It is an impressive first outing for ECHOSOUL and its founder, Guy Hinton, and made even more so knowing its origins lie in pained depression. For me, that is one of the biggest takeaways from ‘The End Of Darkness‘, that somewhere along the way, the darkness does end and withdraw. Vanquished and transformed into an offering of refined, pure heavy metal glory.

A stream of ‘The End Of Darkness‘ is provided in this review; CD and vinyl LP formats available to purchase in the U.S. from Animated Insanity Records [LINK] and internationally from No Dust Records [LINK].

1 thought on “ECHOSOUL ‘The End Of Darkness’ Album Review”