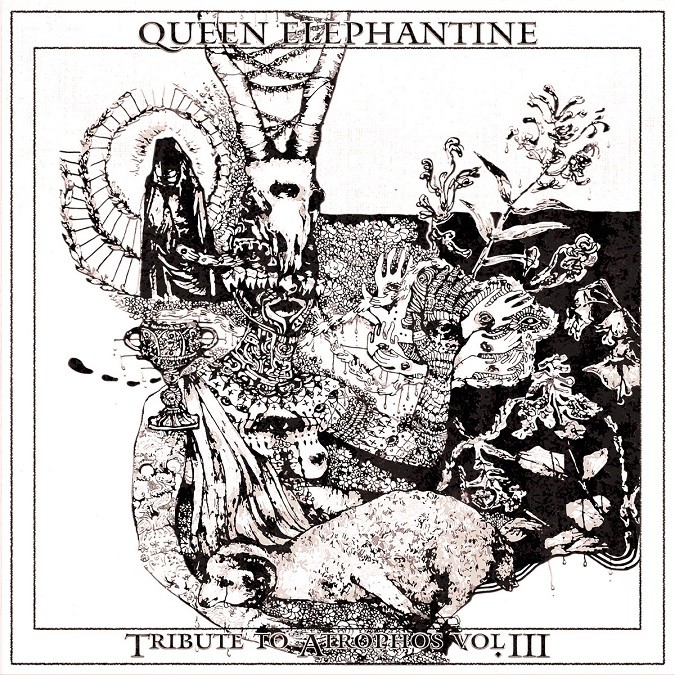 Philadelphia, Pennsylvania’s QUEEN ELEPHANTINE have returned in 2020 with a new set of EP’s released in a digital series, entitled ‘Tribute To Atrophos‘. The illustriously psychedelic avant-garde collective was formed in Hong Kong in 2006, by Indian musician Indrayudh Shome and has wandered through many cities before finding its current home base in Philadelphia.

The post-apocalyptic global sound of QUEEN ELEPHANTINE is both heavy and transcendent, informed by everything from doom, drone, noise, krautrock, free jazz, and spiritual and subversive sounds from all over the world. Besides several studio albums, the band has released a number of splits, including with Sons of Otis and Elder, and have recently finished a collaborative album with the Russian act Phurpa.

With a fluid lineup and various experiments in approach over the course of their four albums, QUEEN ELEPHANTINE is nebulous worship of heavy mood and time. In observance and tribute to this period of global atrophy, they’ve presented a collection of improvisations recorded in the months following the release of their last LP ‘Gorgon‘ in November 2019, on Argonauta Records and Atypeek Music.

The artist Sunny Acosta Griffin provided the cover artwork for both Vol. II and Vol. III, with Vol. I cover artwork by Louie Montoya. ‘Tribute To Atrophos Volume III‘ was released July 1st, 2020, on Bandcamp as a NYP (Name-Your-Price) album [link] and through other major digital outlets through French label Atypeek Music.

You can also find the ‘Tribute To Atrophos‘ series Volume I [link] and Volume II [link] on Bandcamp.