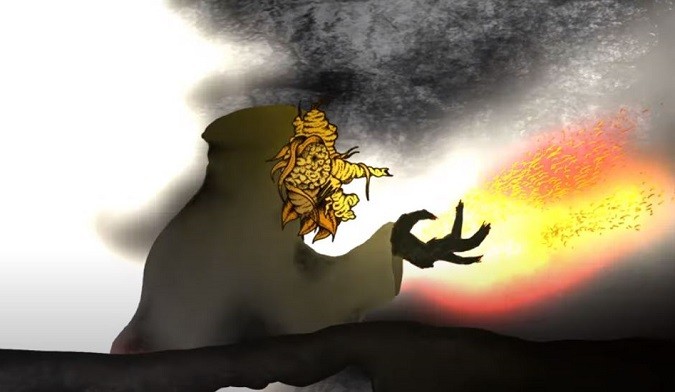 Their multi-faceted songwriting approach features eight-armed drum patterns by drummer and vocalist Hozoji Matheson-Margullis grounded by thunderous walls of fuzz distortion from bassist Dana James and guitarist Ben Verellen. The balance between knuckle-dragging heavy doom force and transcendent beauty fluctuates throughout and proves why the band has rightfully stuck around all these years.

Today, HELMS ALEE has unveiled a never-before-seen music video for the ‘Noctiluca‘ album standout single “Lay Waste Child.” The animated video, created by Aaron Guadamuz, is ominous and dynamic and captures the song’s words and spirit. See the full video below.

There’s still time on today’s Bandcamp Friday (September 4th) to pick up ‘Noctiluca‘ for only $4- (with 100% of all sales going directly to the artists) and revisit their entire Sargent House back catalog for the same price today only on the Helms Alee Bandcamp.