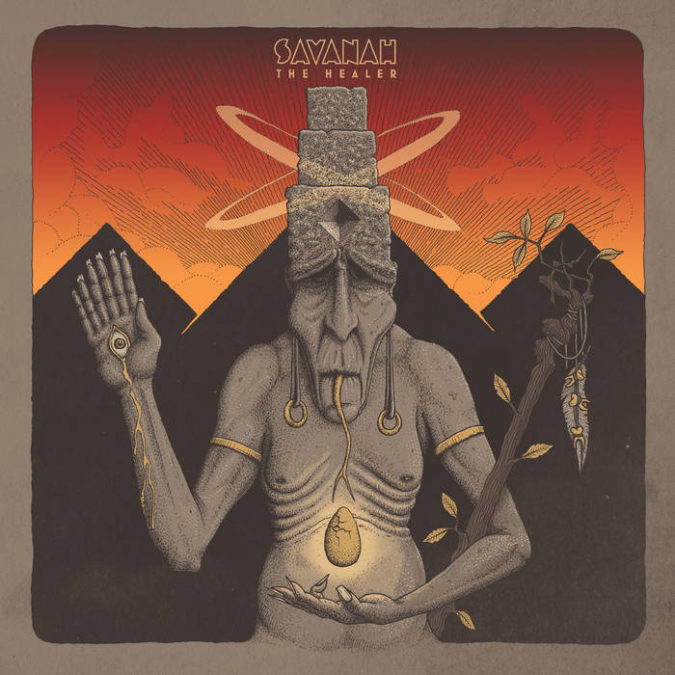 Savanah’s “The Healer” undulates through a variety of spaces and emotions. At times, the album trudges forward with primal riffage; at others, it erupts into an ethereal sorrow.

Released in May 2017, via StoneFree Records, ‘The Healer‘ is loaded with fat, fuzzy bass, stellar leads drenched in wah and reverb, pounding drums, and an endless supply of interesting passages, the album is a wild musical journey.

If you’re into the sub-genre thing, the trio of Benny (bass, vocals), Jakob (guitar), and Felix (drums) from Graz, Austria, refer to themselves as an ‘aggressive stoner’ group, and rightly so.  At times primal and violent, “The Healer” is always advancing aggressively, pressing forward and evolving in a refreshing twist to a genre that is often content to chill in its own groove.

For a better look at what I’m getting at, check out ‘Black Widow’.  The tune begins with an almost-ignorant stoner riff, which quickly morphs into a mellowed delay section.  The vocals, reminiscent of Mars Red Sky, are thick with reverb and sound, at times, as though they’re coming from the far end of an underground tunnel.

The track swells back into riffage and explodes into a wah-ed out solo that twists into a bluesy breakdown rich with delay and thick, gritty bass. For a moment, we chill here, but the bass moves to the forefront into a section which calls to mind sections of Tool’s epic, ‘Lateralus‘. The tune then comes back down to earth, concluding with the primary riff.

As a whole,’The Healer‘ is a fun and inspired ride. Throughout the album, the songs flow and crash in surprising ways. If you want to check it out, the album is streaming on the Bandcamp embed below and is also available through Spotify. If you really dig it, the album is available in vinyl, cd, and digitally, via their Bandcamp, as well as Stone Free‘s  website store, and iTunes.

If you’re in Europe and would like to catch Savanah live, rumor has it that the band is going on a brief European stint from October 31 – November 11 with Minus Green, though information is limited on the tour. We did locate a couple of Facebook events for the following appearances (click each event for details):