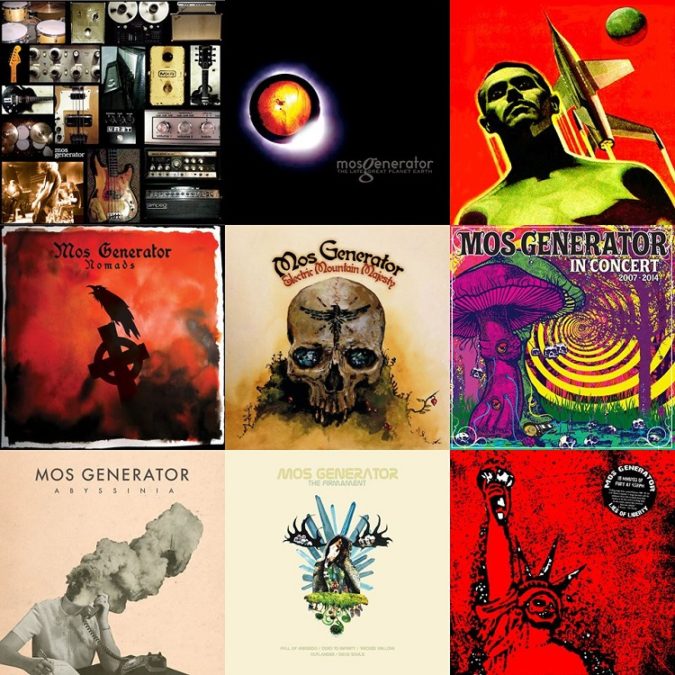 This started as a simple update of tour info and confirmed dates for MOS GENERATOR. Then after a quick chat with Tony Reed, that simple update turned into almost sensory overload. SO MUCH NEWS.

If you’re new to the name MOS GENERATOR, you should pay attention. They’re not new to the heavy rock world. In fact, they’ve been around for about 17 years. Based out of Port Orchard, Washington, with a few member changes since the onset, which we won’t go into here – the ever-present Tony Reed (vocals, guitar, multi-instrumentalist), with Sean Booth (bass), and Jono Garrett (drums) are rather busy gentlemen these days.

The upcoming new release, entitled ‘Shadowlands‘, is completely written, and about two-thirds of the way recorded. With an estimated release date in March/April 2018,  ‘Shadowlands‘ is planned to be their last release with the Listenable Records label.

Tony gave a sneak peek at the cover art (hint: it’s breathtaking.), which is by revered artist, Adam Burke of Nightjar Illustration. ‘Shadowlands‘ will be MOS GENERATOR‘s fourth release with album art by Burke and it may surpass all previous, in my opinion.

In the meantime, if you haven’t heard MOS GENERATOR‘s most recent full-length, ‘Abyssinia’, it is its own work of aural art. One of my top albums for 2016 (coincidentally released on my birthday), and it’s streaming in full below.

MOS GENERATOR now has its entire full-length 12″ vinyl release discography available via HeavyHeadSuperStore, along with other formats and goodies. All are free shipping as of this moment, so scoop something up to help fund more Mos Gen tours.

Mos Generator and Tony Reed (of HeavyHead Recording Co., as well as Stone Axe band, too) keep releasing and releasing and releasing new material, as well as recording older material they never before released. Most recently, they’ve offered, for a free digital download on Bandcamp, their cover performance of the KISS song “She“, recorded live at Winterland in Bremerton, Washington on June 23rd, 2007.