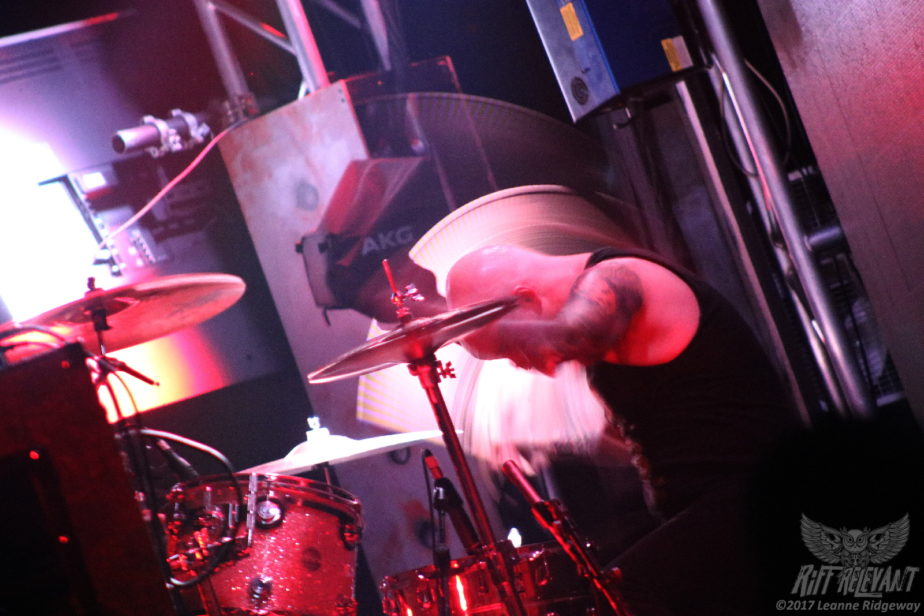 FOUR ON THE FLOOR – THE DRUMMER’S SPOTLIGHT #5:  JON BARRYSMITH

Jon Barrysmith is quite the force to be reckoned with.

In the two short years since the inception of Year of the Cobra, the two-piece Seattle, Washington band has covered a substantial amount of ground. Several US tours and even a visit overseas. Jon exemplifies what I absolutely love about the drums… sometimes you literally just need to beat the shit out of them. Anyone that knows me, knows that I have a sweet spot for hard-hitting drummers.

Sometimes it’s not about the technicality or the finesse of how a drummer plays, but just the sheer force of the playing itself. I had the opportunity to sit down with Jon and pick his brain on Year of the Cobra stuff, as well as talking some shop with him about gear.

Here is installment number four of my Riff Relevant ‘Four on the Floor‘ Drummer Spotlight, with Jon Barrysmith of Year of the Cobra!

JON:  My live gear set-up has been very consistent for quite a few years now:

Riff Relevant [Brendan]: When was the exact moment you realized you wanted to play the drums? Who was your primary influence at that moment? What life lessons did you take away from those influences?

JON:  I grew up in Santa Cruz, CA, which was this crazy hybrid of a surfer, skater, punk rock, hippie, college town. I obviously gravitated and latched onto the surf/ skate/ punk rock side of things when I was super young.

There was this incredible punk rock / hardcore scene we all immersed ourselves into. I vividly remember the first punk rock show I went to, I stood there, wide-eyed, and said “That’s what I want to fucking do!” It was all local musicians and drummers that were my early influences – people I got to meet, become friends with and eventually play shows with.

Main life lessons I learned from that time was the punk rock ethos. Which is still a huge part of me and YOTC – Do it yourself, pave your own path, and bring other people you love and respect with you.

Riff Relevant [Brendan]: Which Year of the Cobra songs best exemplifies you as a drummer?

JON:   Man… I guess I would say “Persephone” from ‘…In the Shadows Below’ or “Cold” off our brand new EP, ‘Burn Your Dead‘. ‘Persephone‘ has that punk rock/metal growl that’s just embedded in me and the “Cold” song has this cool vibe and a lot of dynamics I’m really proud of.

JON:   Not really. My live gear is also my studio gear. I have a few different snare drums, but we always end up using the snare I use on a daily basis as the main snare for recording.

JON:    My practice pad, usually a cold beer, and tape for my fingers – constantly busting my hands up! I always like finding a quiet place about an hour before a show to do this.

Riff Relevant [Brendan]: Do you find that being in a two-piece band makes it more challenging to musically fill out the songs percussively? Or just the opposite, does it allow you more creative freedom?

JON:    I’d say both. Amy and I have the same vision when writing songs and we let that dictate what needs to happen – there’s parts that need to be filled up, and then there’s parts where we feel it needs to be simple and laid back.

That being said, I do think about things a lot differently in this band, since there’s a lot of space to fill. It does get tricky at times to balance how that gets filled – do I use pure volume and power, or do I get more technical to fill it out? That’s the fun part… messing around with both. Then we’ll usually demo some ideas and choose what feels right.

JON:   Depends on where we are, haha! Touring Europe is rad because typically, you have longer sets, so you can really mix it up every night and take people on a journey. The U.S is different, because you usually have 30-45 minutes most nights on tour. When that’s the case, you focus in on trying to perfect that set, and maybe throw in a new song here or there to change it up and to keep you on your toes.

I also think I play with a lot of power – you feel it in your chest. One of my favorite compliments was from Matt (drummer for Elder) at Psycho Las Vegas, he said that “every one of my fills sounded like cannons going off”. I thought that was pretty rad…

(Photos included were all taken during Year Of The Cobra live set at Psycho Las Vegas August 2017.)

Riff Relevant [Brendan]:  Any brand loyalty? Are you partial to one drum company over another? Any current sponsorships or your own signature gear?

JON:  I feel very honored to be endorsed by Pork Pie Percussion. They make the best-sounding drums I have ever played and they have been so supportive. Other than that, I religiously play Vic Firth Metal Wood Tip Sticks, Zildjian Cymbals, Aquarian and Evans drum heads.

Riff Relevant [Brendan]:  What’s the most important piece of equipment currently in your live setup?

JON:  The snare drum, for me, is always the cornerstone of a drummer’s sound. That, and big cymbals. 🙂

Riff Relevant [Brendan]:  What’s that one song that you just refuse to take out of your live set?

JON:  That evolves as we write and put out records, but “White Wizard” has definitely been a staple since our first show in 2015. It was actually the first song we ever wrote together – I came up with the main riff for the song, showed it to Amy, and we bashed it out in like an hour. That’s when we knew the band was born.

Riff Relevant [Brendan]:  What do you basically love about the drums? Is it just the simplicity of the sound, or do you find that it’s more than just a percussive instrument for you? Is it the only instrument you play?

JON:   Playing drums keeps me sane. I love the power you can create playing drums, I love the feel it invokes and how the drums can really dictate where the songs goes and how it feels.

I also play guitar and write lyrics – riffs and lyrics have been used in every Year Of The Cobra release.

Riff Relevant [Brendan]:  What do you enjoy doing outside of music, that you feel ultimately contributes to your musicality?  For example, a hobby that you turn to in order to stimulate your creativity.

JON:  Snowboarding, hiking in the woods, and hanging with my family – they motivate me to work as hard as I can on anything I do.

Riff Relevant [Brendan]:  Are there any newly emerging artists that are currently influencing you?

JON:   We tour quite a bit, so we are always motivated by killer bands we see and/or play with. Do they influence our sound? Not really. They definitely make us want to work harder and be a better band… so I guess that can be considered being an influence.

Riff Relevant [Brendan]:  If you could give one piece of advice to an up and coming drummer what would it be?

JON: Play every day and be nice. No one likes an asshole.

Oh, and never break down or assemble your drum kit on stage… EVER.

Riff Relevant [Brendan]: What’s the most fun you’ve had out on the road with YOTC?

JON:  Oh man. Every tour has been a blast. Our first European tour early this year was probably a highlight, for sure. The shows blew us away and all the promoters and people who came out were so awesome and treated us so well.

We also drove the van ourselves, just Amy and I, so that was pretty crazy and super rad at the same time. It was a great way to experience Europe.

Riff Relevant [Brendan]:  In your opinion, what band created the blueprint for the sound YOTC most closely models its sound after?

Riff Relevant [Brendan]:  Is ‘Burn Your Dead’ the best YOTC record, in your opinion? Do you notice any major transitions in your sound, or does it simply just complement your existing catalog?

JON:  It’s our best “to date” for sure, and we are really proud of it. Since it was an EP, we definitely took few more chances and tried to expand a bit and I think we opened a few more doors for the next full length, in terms of direction. We’ll always be heavy, but it’s fun to mix things up.

Riff Relevant [Brendan]:  I’m sure there are tons of others like myself who are very curious to know, what’s it like writing, recording, and performing music in a band with your spouse? (Bassist/vocalist – Amy Tung Barrysmith)

JON:  Honestly, it’s the best. This has been the easiest band I ever have been in, and by far the most fun… and I have been in a lot of bands in the past. We are able to write music together at home, show each other lyrics and talk about touring plans – all in real-time, we don’t have to send emails or make phone calls. Decisions get made very quickly in the YOTC camp. And she’s a fucking badass 🙂

That being said, early on, we had to learn how to be productive at band practice – if one of us had a bad day at work or whatever, we’d drag that into our practice space and it would cast a dark cloud. Naturally, you’d want to talk about it, or not check it at the door since it’s your spouse. That never happens when you’re in bands with your friends – it’s an escape and instantly fun. Once we applied the rule of checking the outside world at the door, like every other band, we were off and running.

Riff Relevant [Brendan]:  Anything on the horizon for the band that you can tell us?

JON: We have two songs on Magnetic Eye’s Pink Floyd Redux of ‘The Wall‘ coming out early next year – Melvins, ASG, Mark Lanegan, Pallbearer, Mos Generator, plus many other rad bands have also contributed a song.

We’ll hit the road again in February / March for an extended West Coast and Southwest tour, and then we are going back to Europe in May / June for some festivals that will be announced soon. We also have some exciting stuff lining up for later in 2018, that we’ll announce when we can.

Thanks a bunch, Brendan!