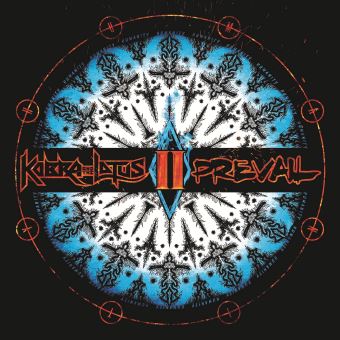 Prevail. It’s such a small word. A gentle, encouraging word, not a demanding, strident one.

It’s an especially meaningful word for singer / songwriter Kobra Paige, who has gone through so much personally and professionally in the 11 years she has spent fronting Kobra And The Lotus – not the very least of which was a car accident she was recovering from as the Canadian band toured the U.S. with Texas Hippie Coalition this spring.

The accident happened May 6 in a car operated by a ride-sharing service.

“(The driver) was driving with his phone (held under his chin) and his knees and he was not looking at the road,” Paige said in an interview aboard the band’s tour bus prior to a show in Harrisburg, PA. As she spoke, she strapped an ice pack snugly around her neck to alleviate her recurring pain.

“He looked at the map and he drove straight into the traffic barrier at full speed. (I wasn’t wearing a seat belt and) I slammed my face really hard into the thing between the middle (of the seats). It’s mostly my left side that’s been affected, but it goes all the way to my tailbone. I’ve been feeling quite uncomfortable – it’s affecting my thoughts every day,” she said.

But, she prevails. So it then seems logical to look at Paige’s story in terms of that word, to provide examples of how she has done that in so many aspects of her life to date.

Less pervasive in Paige’s thoughts these days, thankfully, is her recent recovery from a serious case of Lyme disease. She said it was transmitted to her from her mother, who had been carrying the bacteria since she was a teenager.

“My (younger) sister was super debilitated,” Paige said. “And then I started getting very ill, and my mom started falling apart. They found Lyme culture in her saliva and started treating Tessa (my sister), and then my mom said (I) should get tested for Lyme, and sure enough, I was very positive.”

She did both ‘Prevail‘ albums at the height of her illness, describing in a Facebook post her debilitating symptoms – “a chronic sore throat, fatigued to the core … terrible joint pain, brain fog.” The rest of the band had no idea she was that ill.

She further described her harrowing ordeal:

“We treated it for a while with oral antibiotics and it was working for the first year, mostly holding it at bay,” she said. “And then it just rampantly came back in the second year and got worse than ever. (My) doctor didn’t have many tools past oral antibiotics at that time to treat it, so he said he was going to send me on the fall tour (last year) with another oral antibiotic on top of the two I was taking daily,” she added.

It got to the point where an IV port was placed in her heart. She toured with it for almost two years and just recently had it removed; she pulled aside the silicone patch below her collarbone to show the tiny scar.

“I’m over the hump,” she said. “I have to take care of my health — it’s a good motivator for me to stay on top of my immune system — but I’m no longer needing treatment and I’m not testing positive.”

For Paige, good mental health is as important as good physical health. She was interviewed recently by Psychology Today for an in-depth piece on “breaking the cycle of toxic thinking.”

“I think it’s interesting to acknowledge those internal functions — it’s very tough to catch that,” she said.

In fact, the song “Light Me Up,” from ‘Prevail: I,’ is about “trying to help someone through a very intense, dark struggle.” Many of the other songs mention insanity, despair, and hopelessness.

“It is hard to not have a certain level of illness or you’re not even human,” she said. “And the support for each other and for ourselves is hard to find or even accept.”

A mere 24 hours before the Harrisburg tour stop, the band lost their tour manager; he had been managing both bands on the tour and the situation became untenable.

And last November, Paige posted a wrenching plea on Facebook saying she had “just about had it with this industry,” railing against “chauvinistic, judgmental promoters … deciding I’m worthy of their respect after they see I’m actually a super hard-working woman” and not just a figurehead. In our interview, she also spoke about being sexually harassed while on tour.

She is responsible, financially and otherwise, for all the moving parts of Kobra And The Lotus. And she admits it’s a heavy load. During a very candid part of the interview, she revealed just how heavy it is.

“The fact that I am the driving force behind the band (is so that) these guys don’t have to worry about any of those things,” she said. “I have taken all the risk on myself. I’m the only one carrying that on my back.”

“The guys don’t know that I’ve never given myself the ten cents yet and everyone gets taken care of in this band. That’s hard on me because we aren’t sustainable yet. Every single thing is going toward making sure they can sustain themselves and their lives and also so that I can have this experience with them and push the band forward,” she added.

But she remains a harsh realist.

“I will not continue this if it doesn’t sustain itself soon,” she said. “I don’t need it to grow to a big level — it needs to be sustainable on its own two legs and it isn’t yet, and that’s been very stressful for me.”

What does being “sustainable” mean to her?

“I’m paying back debt all the time — that is one thing that prevents me from maybe enjoying it to the full degree all the time,” she said. “This is my 11th year committing to this, and I can’t support a family to save my life. I’m just worried about paying the bus back, and it’s not anyone else’s problem but mine.

“The thing that makes me sad is I can’t choose in the universe whether we continue or not,” she said. “I hope we can — these last two albums have made a big impact.”

The two albums began as one double album, written and recorded over a three-month period in Denmark back in 2016. ‘Prevail: II‘ was kept under wraps for a year before its release.

“We had shopped it around and Napalm (Records) really gunned for us hard,” she said. “They strongly suggested to split it up, and I am so grateful we did, because it was the smartest and best thing we could have done.

“(But) nothing can take away that it was all written and done at one time (mostly in the studio, with guitarist Jasio Kulakowski as her writing partner),” she said.

“The resilience is something that is always there, and has to be there, especially to do something in the arts,” she said.

And there is symbolism everywhere, even down to the album covers, which feature two mandala: one white and gold, the other black and blue with touches of orange. They reflect what the spiritually minded Paige calls “the duality of the universe.”

“It lies in everything that exists, even our name, Kobra and the Lotus,” she said. “It has duality in how it sounds and its energy — masculine/feminine, life and death, struggle and triumph. (The first mandala) was pure, it was its true nature, it hasn’t been bruised or beaten up by life yet.

“(The second) is dark, but it’s full of fire and vibrancy. When you turn to the back, there is another mandala, and that one is pure, just bringing you back to what your true nature is again,” she said.

“Gotham” which starts ‘Prevail: I,’ and “Losing My Humanity,” which starts part II, deal with external and internal darkness. “Human Empire” is a similar idea, that of humanity being corrupted on a larger level.

“No person has really lost their humanity — we just let it slip away sometimes — but we didn’t start that way,” she said. “That’s not human nature at the core.”

“I’m not an advocate of social media” despite her steady presence on it, she said. “I am trying my best to use it the way I want to have an impact with it.

“The traffic that comes through on the social media drops immediately when I started posting what I really care about. People want to see selfies and they want to see an idea of perfection that doesn’t exist. I don’t think it’s healthy for the next generation. I think it’s creating a really dangerous pressure from something that’s not reality,” she said.

“It’s about torturing oneself within your own mind and being trapped in your own vicious cycle,” she states. “If you put on paper the things you say to yourself – ‘I’m a piece of shit, I’m fat, I suck, I’m a failure, I wish I was dead’ – we say the worst things to ourselves.

“And that actually changes how we are to other people. So (that song) is really trying to paint it, almost in a physical way, how much we agonize ourselves with our own mental breakdown,” she added.

“You Don’t Know,” from ‘Prevail: I,‘ is an especially important track in the entire song cycle.

“It was about the idea of feeling misunderstood – I feel misunderstood and I don’t know anyone who doesn’t feel (that way),” she said. “I don’t know what anyone else is going through at any given time either. It’s a human anthem. It’s just the truth — you can’t write someone else’s story.”

A few hours later, a visibly revitalized Paige and the band hit the stage at the Midtown Arts Center. Sticking to a set drawn from the ‘Prevail‘ albums, they run through its tracks with vigor and passion.

Paige showed little signs of her earlier obvious fatigue, moving with ease and assurance, her voice powerful, dynamic, and rich in her trademark lower register. Deceptively tiny and soft-spoken offstage, she grows in stature and confidence onstage. She is a potent live performer and the rest of the band – guitarists Jasio Kulakowski and Ronny Gutierrez, bassist Brad Kennedy, and drummer Marcus Lee – are brilliant.

The set closed with their uniquely arranged, deconstructed take on Fleetwood Mac’s “The Chain”. Their version reinterprets the “chain” as a unifier, not as a constrictive binder, so typical of Paige’s mindset.

So ultimately, what IS it like to be Kobra Paige? After a difficult year, during which she felt she needed to step away mentally, it’s about, yes, prevailing.

“I had to just ground myself again and remember why I got into this industry — why I do music, what I love about it, and why I am doing it for the reasons I am,” she said. “We had a lot happen last year and it just built up and I was just about ready to be like why am I even doing this at all?

“But I remembered. And I’m here and I’m so happy to be here. I feel very grounded again in my purpose. I feel very blessed to have the life I have. I feel lucky that I get to do music and bring my messages forward with music, and for the people I get to work with and write with. I would say overall I feel very grateful,” she said.

Before we close, KOBRA AND THE LOTUS and Butcher Babies just announced they will co-headline the ‘Female Metal Voices Tour‘ across Europe later this year. Skarlett Riot and Ignea will appear throughout the run, while Asphodelia and Martyrium will appear on select dates. Here is the itinerary: