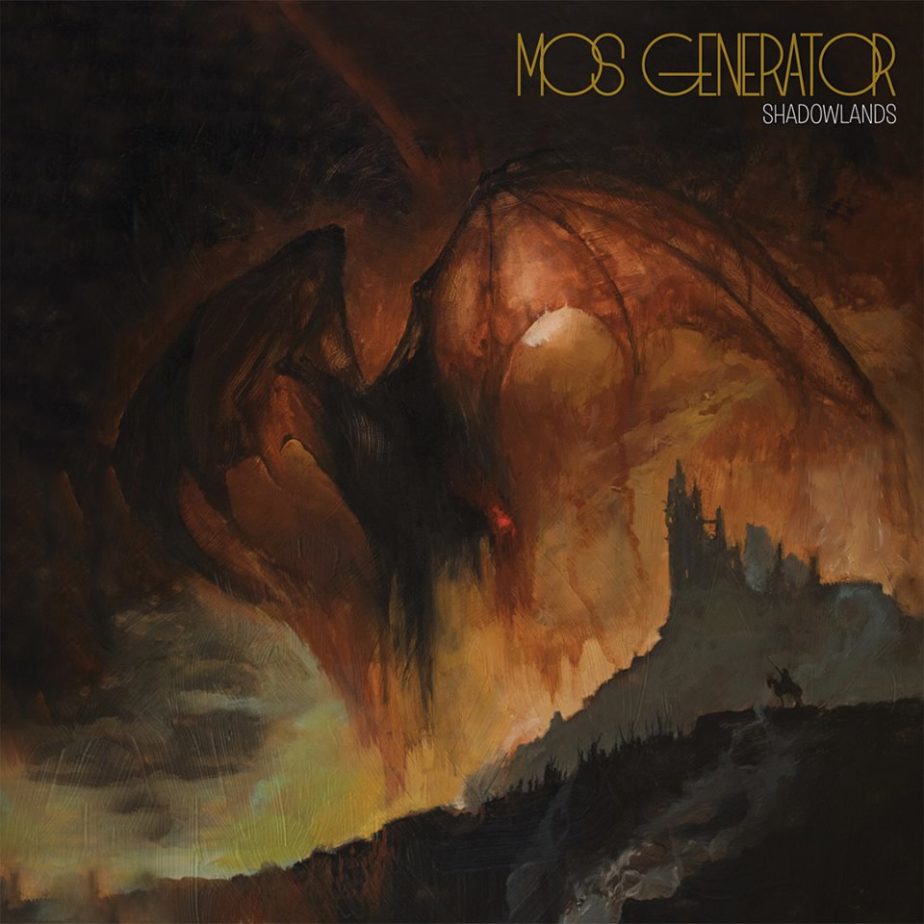 MOS GENERATOR‘s ‘Shadowlands‘ album was released last month through France’s Listenable Records. Back in Fall 2017, after a sneak peek at the cover art by Nightjar of Adam Burke, the waiting had begun. Months of waiting in fact, for both that painting to be seen and for ‘Shadowlands‘ to be heard.

Sometime in March, promo copies were sent out by the label PR of the finished ‘Shadowlands’ album and we had our first listens. In the Spring, the band went on their ‘Road Rats Tour’ with Fu Manchu [photos here] and performed live in NYC on May 12th. It was a phenomenal set to behold. I may be *slightly* biased as they are a favored band, but whether you have yet to see the band live or have seen them many times, it’s an experience not to miss.

MOS GENERATOR confirmed a whole slew of U.S. tour dates for the next few months, with a main stage appearance at HELLFEST, as well as other fests in the U.S. including a headline slot at DESCENDANTS OF CROM. A full list of new dates is at the bottom (updated as of today), with more dates to come.

Truth be told, my awe of the Burke painting has nothing to do with my appreciation for the album or the band, it was happenstance. Once I saw the artwork, the painting was sought out before ever hearing a song off the ‘Shadowlands’ record. Thankfully, these two creations are now entwined beautifully as full sensory works of art.

Both the painting and the album are a compelling vision of darkness and light, vehemently dragging your withered soul from the depths of whatever personal hell was created by real or imagined monsters, trudging a path through every cave of a defeated yet inexplicably hopeful imagination, stomping straight up until the soaring logic of an enlightened mind breaches a new horizon.

While the vast MOS GENERATOR discography (over 40 releases to date) has been a staple part of my listening repertoire, ‘Shadowlands’ hasn’t left regular rotation since March. It’s now mid-June and it’s still all you could hope it would be.

It’s not nearly their heaviest album, with the recent proof being the insanely fantastic ‘Lies Of Liberty‘ they unleashed on the world in 2017 – a primarily hardcore punk album that will wreck any attempts to pigeon-hole MOS GENERATOR into one cage. Although in terms of mindset, ‘Shadowlands’ may be one of their darkest records thus far.

Title track “Shadowlands” opens with a few playful seconds of Tony Reed‘s upbeat tones and then just rips out of the gate into a ferociously heavy and catchy onslaught of pure hard rock. There’s no real need to describe it further, but it does set the paradigm for most of the album. Tinged as always with heavy blues and classic rock influence throughout, with noticeably fewer prog roamings here than on earlier releases, it demonstrates the comfort level these three men have reached with each other as bandmates and individual performers.

In the liner notes, Mr. Reed stated the second song “The Destroyer“ has “an ‘Immigrant Song’ feel to it”, and that may be true but my initial reaction to the opening fret scrapes was to briefly reminisce on Soundgarden’s “Jesus Christ Pose“. Beyond those first few seconds, it becomes pure Mos Gen sonic assault. The pace is relentless and incites a sense of danger.

Many articles focus on Tony Reed and his rather long list of instrumentation and songwriting capabilities. He is indeed an all-scale accomplished performer on his own. His artistry is also widely sought after behind the board at his HeavyHead Recording Company, for his savvy in bringing out the best in any recording, as well as (let’s be honest) helping a few bands sound better than they are in reality. While that list of his skills has been repeatedly proven true and we could likely prattle on for days about the pristine sounds of his guitar playing, there are two other important human wonders within MOS GENERATOR that deserve our attention.

Jono Garrett is a rhythmic basher of the utmost elegance. He’s almost surreal, you can nearly witness the Possessed demon that seems to take over as he sits behind his drum kit. He seamlessly sneaks in what seems like a thousand complex, sweeping fills into each song. You’d think it would ignite flames across his entire kit. It’s phenomenally mesmerizing to watch him play and no one should live their life without witnessing it at least once.

Sean Booth is a purely natural talent on bass. After talking with him a bit, I discovered he’s never had a single music lesson – it’s all learned with only his own ears and hands. I don’t know about you, but that certain musical ability has always fascinated me. When I first heard “Catspaw” off 2016’s ‘Abyssinia‘ release, the bass line floored me. To this day, I get chills when I hear the solo feature before the second verse. Mr. Booth is a driving force in this band and has reduced my lungs to rattling gasp satchels during their live sets. He’s ridiculous.

Now I could go on and describe every nuance of every song, but I won’t dissect music to try to tell you what you should listen for in note 137 of track eight, or what effects were used in recording (Mr. Reed uses no guitar effects pedals, that I do know). My listening is purely for enjoyment and I can only describe what music makes me feel or envision when I hear it. When I’m inspired by a certain release, I may be compelled to share why it did so with whomever reads my stream of consciousness tirade about it. Well, color me compelled.

After endless play-throughs of ‘Shadowlands’, “The Wild & Gentle Dogs“ has affected me more than the rest. The soft acoustic and soothing vocal entrance give way to a rising build that, in my opinion, should be a film soundtrack. It invites an imagined story through a sensual auditory arrangement of slow-burning tension. Three individuals in their separate plot stories maneuvering closer and faster, until they surround and discover each other exists. The balancing of multiple progressions intensifies almost into a full-run chase scene that brings you to the edge of your neural cliff, waiting for an explosion of eye-searing light. It’s a magnetic, perfect ending to ‘Shadowlands’.

MOS GENERATOR is an established, recognized name within the heavy underground, with ‘Shadowlands’ they have taken a firmly balanced leap above the panorama. The above-ground recognition this album is bringing the trio is earned from years of tremendous effort and more than well deserved.

Get a copy of Shadowlands at one of these locations:

Check out Mos Generator photos from their May 12th show in New York, then go grab ‘Shadowlands‘.