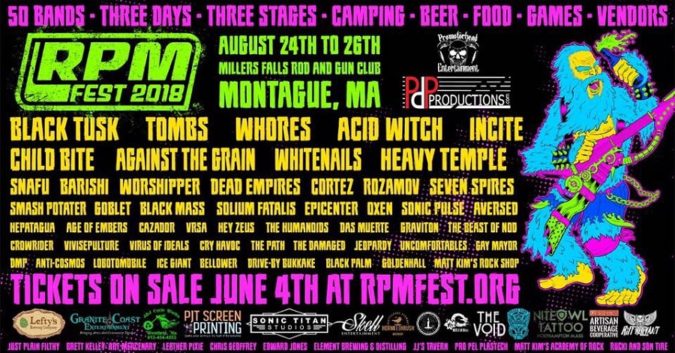 Held this year in Montague, MA, RPM Fest is an annual three-day outdoor heavy Rock, Punk, and Metal music festival. For 2018 it features 50 bands on three stages, as well as camping, games, local beer and food vendors, and more.

The RPM Fest organizers announced the 2018 full band roster for the August 24-26th event last month [HERE], with the lineup bringing in national acts such as Black Tusk, Tombs, Incite, Whores., and Acid Witch, among others, as well as additional local/regional vendors and sponsors for the 2018 festival.

RPM Fest Early Bird Ticket sales began in June and the discounted prices are due to end on Monday, July 2nd (TOMORROW). You can find tickets and pre-order various merch bundles here: rpmfest.org/tickets

They’ve also released an RPM Fest 2018 Compilation on Bandcamp, featuring over 30 songs from the festival roster of bands, and it’s offered as a ‘Name Your Price’ digital download. Stream it below and go [HERE] to buy and help support the fest!

Riff Relevant is psyched to help sponsor the RPM Fest 2018 event. Look at this insane lineup!