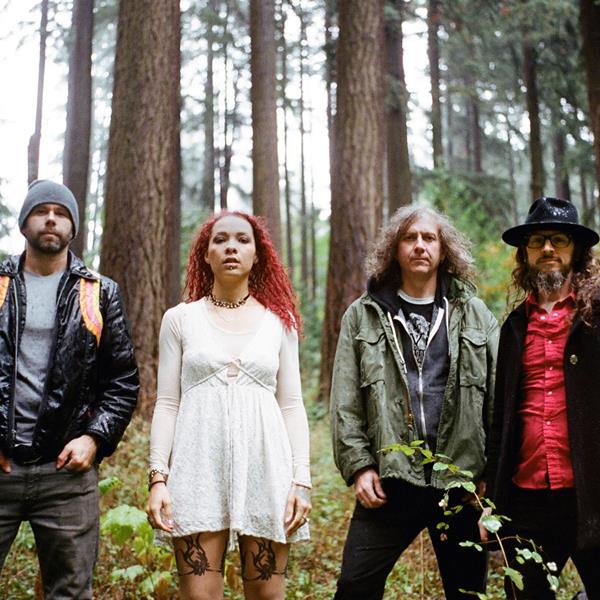 Portland, Oregon’s WITCH MOUNTAIN is a globally revered band in the contemporary age of Doom, one with an extremely loyal following.

For the unenlightened people who may be unaware, the band’s origins date back to 1997, with the ever-present constant being the duo of guitarist Rob Wrong and drummer Nate Carson. The pair have stayed the course of WITCH MOUNTAIN for over two decades, while the remainder of the band’s roster now is rounded out with vocalist Kayla Dixon and bassist Justin Brown.

The latter pair of Dixon and Brown have a commonly shared connection, having both recently made their first official full-length album appearance with the band. That occurred with the recently released ‘Witch Mountain’ self-titled record from Svart Records [Purchase], a monstrous offering of superb heaviness that only WITCH MOUNTAIN can deliver.

Currently out on the roads of the U.S. on tour, WITCH MOUNTAIN is obliterating venues across the land. I was lucky enough to catch their ongoing crusade when they stopped by The Mothlight in Asheville, NC, for a one-off with Atlanta’s Royal Thunder and AVL’s rising Almuten. If memory serves me correctly, this would be my third live experience with the foursome, something I elaborated further on within a show review [LINK].

Being a die-hard fan of WITCH MOUNTAIN, I was ecstatic to receive the opportunity to interview the band on camera, while they were in the ‘Ville. So, come check out our sit-down with Nate Carson, Kayla Dixon, Justin Brown, and Rob Wrong, in our latest installment of interview conversations…