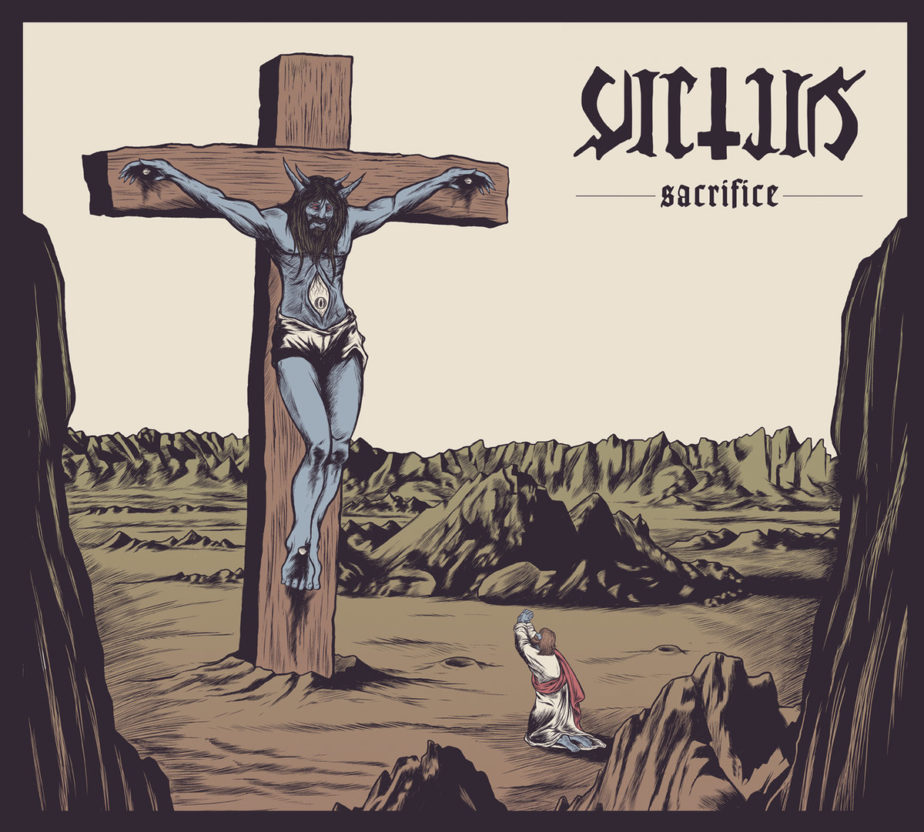 From across the pond comes the Portsmouth, U.K.-based VICTUS and their newly-issued debut release, the “Sacrifice” EP.

With a total of six tracks, one of them a brief intro, this four-piece band impressed me immediately, right from the first listen. With the aptly tagged “Intro“, things slowly ooze outward with a doomy undercurrent for the first minute and six seconds. But, that’s where the doom ends… for now.

“Singularity” instantly explodes with some bluesy guitar licks, the music itself seemingly revving up and building steam before its full-on combustion. Tightly knit rhythms ride the rails, as piston-like drums drive the song’s advance, all while some throat-shredding vocals wail away.

Those vocals will get cleaner in the bluesy doom, fuzz riff-driven second song, “The Swarming“. Like its predecessor, this track achieves a somewhat mesmerizing state with its repetitive riffs, etc., but not in a monotonous or mundane way or anything. For the record and to be clear, it’s an ass-kicker assault of heavy rock.

We get our first breather with the arrival of “Falling Down“, its brief psychedelia laden start will not remain sedated for long, though. VICTUS‘ ever-present knack for aggression refuses to be restrained. Sure enough, it is soon emanating its way through this number. The band does keep it somewhat tampered down at times, as the southern doom styling of the song winds and weaves its way along. But pay attention, there’s a section of incredible, intense double bass drumming which, as part of the greater whole, makes “Falling Down” one of my favorite cuts.

“Hell” comes to town with its amped-up, quickened tempos as, once again, a southern blues ‘n groove feel takes hold of the tune. Things burn with gratifying results, eventually giving way to my other favorite track, “Within The Woods”, a song where everything seems to come together right nicely.

A subtle, psyche-infused passage to start things up soon gives way to a slower-paced deluge of huge riffs. They chunk and chop away as the band’s ability to craft alluring patterns within their music sinks in like a hook and pulls you under. Eventually, they drop the hammer, stomp the pedal, and the song accelerates like a tweaker on speed.

Like I said earlier on, impressive… indeed. For VICTUS‘ first time out, ‘Sacrifice‘ is a most favorable atonement for those inclined toward the heavier side. Stream it in our review or head over to Bandcamp [HERE] to stream or surrender alms to obtain it.