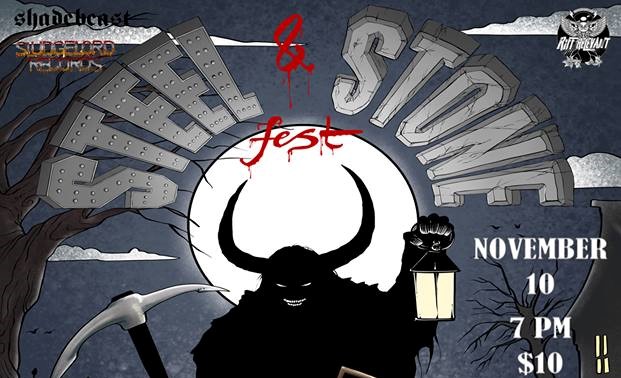 It’s official! The third annual edition of the STEEL & STONE Fest has been announced and its roster of acts revealed.

Once again taking place at The Odditorium in Asheville, North Carolina, STEEL & STONE 3 will take place on Saturday, November 10th. This year’s event will see another thrilling showcase of bands that exemplify the very best in talents from The Carolinas.

Before we get into the band-by-band breakdown, you can find further details and ticket information at this LINK. Also, S&S Fest would like to thank Kyrre Bjurling for creating the incredible artwork and poster (below) for the third year in a row. Now, let’s get to it!

AVL’s own purveyors of true Appalachian Power Doom will serve as S&S3’s heavyweight headliners. For many, this will be their first opportunity to see the band since it has evolved into a quartet and expanded its sound. The original trio of Jason Gardner, Micah Nix, and Chad Barnwell is now joined by Ryan Fox and thus, has shifted to a two-guitar lineup. Prepare to be impressed by the results of that (r)evolution.

Super stoked to see that South Carolina’s vilest exuder of sinister sludgery is joining us in 2018. Guitarist / bassist / vocalist / artist Thorfinn and drummer / keyboardist / sampler Blind Samson wield a true sonic weapon of malevolent mass destruction. When this duo is onstage, your flesh and your very soul are ripe for the decimating and none shall be spared.

Another hometown horror, the blackened doom and thrash metal mangling COVENATOR, will come a’ creeping on this upcoming day. This trio delivers a merciless battery of old-school-infused, Lo-Fi, and oft-times rapidly fired intensity that will wound you through and through. Like your heavy metal with a side of deathliness? Don’t be a hater, come feast upon the ‘Nator!

From the Queen City of Charlotte comes the southern sludge ‘n metallic stomp of the genre-mashing GREEN FIEND. Having recently caught them live for my own first time, I was immensely impressed with this super groove-infused quartet. I suspect our second date will be just as thrilling and just as romantic as that first introduction turned out to be. Make sure you show up to chaperone!

Powered by an ever-present punk rock taint to their aural output, BRN are men intent on getting people on the move… into the mosh pit! Emitting a most frenzied discharge of punk, blues, and crossover metal, this quartet is as real life as it gets. No, there are no dreamy fantasies or surreal, narrowed imaginings needed at all for BROAD RIVER NIGHTMARE kick ass on land, water, air… anywhere!

With unbridled metallic aggression as the source of their existence, AVL’s own BUSTED CHOPS don’t stop until the bodies drop. Harsh and heaving with an abundance of extreme metal elements, this quintet is always set to slay – which you will learn firsthand when they get to play their first S&S Fest come November.

There you have it readers, the roster and run down of amazing acts that will grace the stage of The Odditorium in Asheville, N.C. at this year’s STEEL & STONE Fest 3. Once again, tickets are a mere $10 and things will kick off at 7:00 PM on Saturday, November 10th. Hope to see ya there!