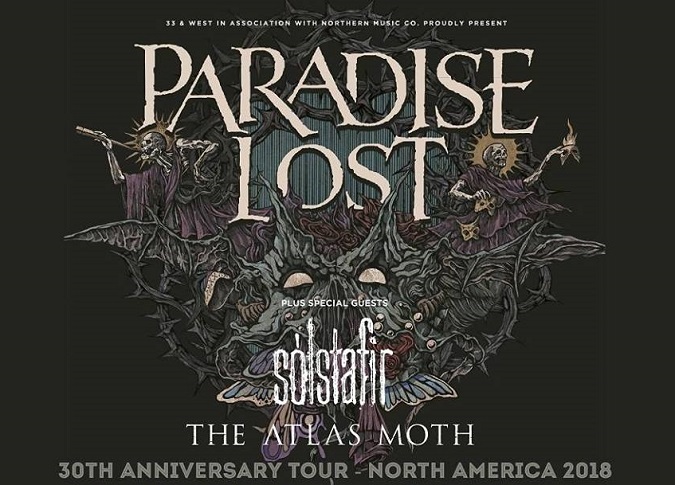 Fall is officially upon us, which of course means we are in the midst of a barrage of disgusting, trendy, pumpkin-flavored garbage being consumed fervently by people who have clearly lost their minds over a flavor even a starving rodent shies away from.

Luckily for those of us who are more interested in music and shows than in seasonal flavorings, Fall also means that it’s busy season for concerts… especially metal or “metal-ish” concerts. This fall started off well for me, with the first headlining tour of Paradise Lost in six years. Supporting acts Solstafir, from Iceland, and Chicago natives The Atlas Moth rounded out the bill at Brighton Music Hall in Allston, MA on Friday, October 5th.

The Atlas Moth started out the night with their version of Psych-Doom-Sludge or whatever you want to call it. (I’m not a huge fan of genre tagging and I’m not very good at it, anyway.) Quite honestly, this was the strongest and most cohesive they have been on stage since the first couple of times that I saw them, sometime between 2010 and 2012, I believe. Anyway, this time they really seemed solid together, “in tune” with each other, if you will (I can’t believe I just wrote that. Ugh.)

Next up was Solstafir, who I was not familiar with until I saw them at Maryland Deathfest in 2014, on the big outdoor stage at the former Edison Lot. Although I really enjoyed them there, this was a better way to see them. Intimate and personal. For many of the people I talked to that night, this band stole the show and I can understand why.

Full of emotion and energy, they began playing to a crowd mostly there to see the headliners and won them over pretty quickly, so much so that audible “wow’s” were heard in the crowd after their set was complete. If I was to make a list of bands to make sure you see live, they would be on it, no question, but not because they have some cheesy stage antics or banter. They don’t, they are just fucking good!

Formed in 1988, British gothic / death-doom / metal band Paradise Lost has released 15 studio albums since 1990, and has earned what you might call legendary status at this point, rightly so. Those first four albums or so were some of my favorite ones to listen to at the time they came out, and it wasn’t even a question to go this show or not when it was announced.

But even their sixteen-song setlist wasn’t going to make everyone happy as, of course, there are those who only want to hear “Gothic” or “Icon” or “Draconian Times” or whichever album or era they like more. This has to be such a chore for bands that have been around this long and have an extended catalog of material to chose from, that I can’t even imagine attempting to please anyone. Bands have to play what they want and what they feel is right at the time and that’s that.

All that being said, they played more songs and spanned more albums than I expected. Songs I had never seen them play like “Gothic” and ones I have like “As I Die” were personal highlights, but they played at least one song from ten different albums. I can’t really say I could have expected more from any band with this kind of history.

They were strong and absolutely together, the songs sounded great, and they touched upon a little bit from just about everything. Vocally, there were some likely necessary changes, with a few less growls in places where they “should” be. Even considering that I just don’t know what else any band could do to make it worth your while to go see them.

Thankfully, the bar wasn’t selling any of that repulsive pumpkin beer, either. If they had, that would be the only negative thing I would have had to say about the show.