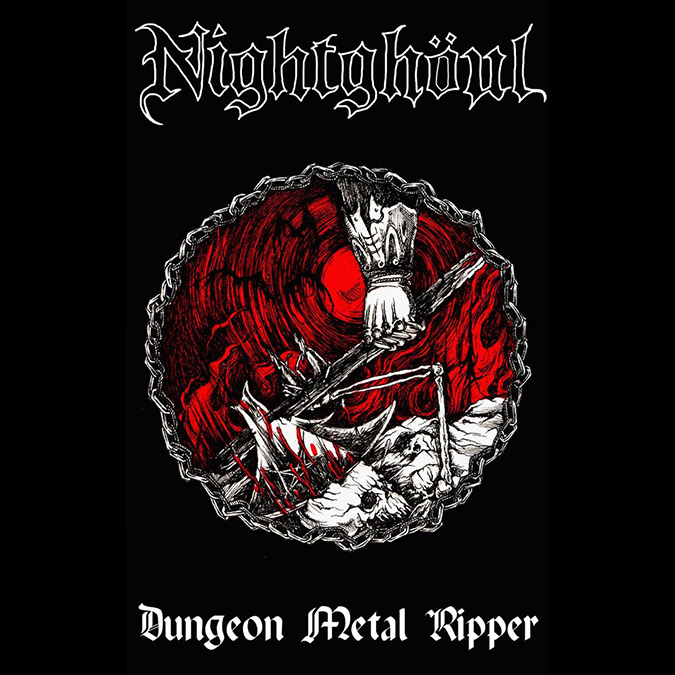 When you only have about twenty minutes on hand to make an impression, you’d better hit hard and fast.

I think this one-man project from Philadelphia, PA – Nightghöul – does just that with ‘Dungeon Metal Ripper‘. Released in October 2017, all instruments, lyrics, and vocals by Nightghöul, mixed and mastered by Ethan Camp, with artwork by Warhead. After a two-minute intro, Nightghöul (aka Pierson Roe) gets right down to business with the four tracks left at hand.

There’s no subtlety or pretense in these eighteen or so minutes, either. Bands like Razor, Hellhammer, and Broken Bones come to mind immediately, as does some early German thrash. Roe even sounds much a very-pissed off Stace “Sheepdog” McLaren trapped at the bottom of a well.

Yep, that last sentence indicates there is something raw, primal, and maybe even a twinge of intentional lo-fi to the proceedings, but I tell you – it works. Also working heavily in the E.P.’s favor is an insistence of guitar melody that raises everything above mere old-school worship.

Short record, short review, and one hell of a fun listen, with an extremely accurate title. If you like the thought of being pulled back to 1985, via some bullet-belted speed metal that cuts through the grimy d-beat back alleyways, Nightghöul is definitely gonna be your arsenic-laced cup of tea.

You can stream ‘Dungeon Metal Ripper‘ above, or hit up Bandcamp to stream and purchase [HERE].