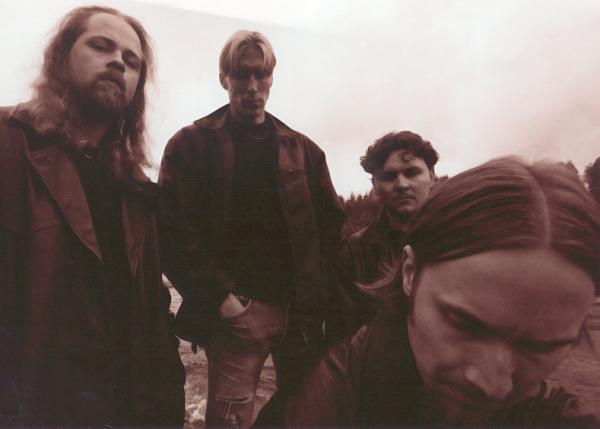 Umeå, Sweden circa the early 1990s, when Andreas Stoltz (guitar, vocals) and Thomas Nilsson (bass) first met during their shared service in the military and decided to start a band.

Originally adopting the name Vaalkyrian, they soon changed it to HOLLOW, a name the pair felt was more in tune with the type of music they found themselves creating at that time. Drawing influences from such acts as Crimson Glory, Elegy, and Queensrÿche, HOLLOW – now rounded out with guitarist Marcus Bigren and drummer Urban Vikström – independently issue a six-song demo, ‘Speak To Me‘, in 1995. That same year, the quartet released a four-song EP for the label Zakana, entitled ‘Stand Or Fall‘.

This pair of releases soon caught the attention of a small, independent label, MM Records, for whom HOLLOW record and release their first official full-length album, ‘Modern Cathedral‘, in 1997. By this time, the band was building a name for themselves in both the underground metal world and worldwide tape-trading networks, their style of technically progressive power metal resonating well in each.

Another EP arrives in 1997, the four-song, self-titled ‘Hollow‘, and soon Nuclear Blast Records expressed interest in signing HOLLOW, and they eventually do. The band’s début album for the label, the landmark recording ‘Architect Of The Mind‘, arrives in 1999, yet not long after its release HOLLOW disband for unspecified reasons.

In the years since, the cult legend status of HOLLOW continued to grow and their music became highly sought acquisitions for fans of traditional progressive metal. Although HOLLOW never reformed as a multiple-member band, founder Andreas Stoltz does keep HOLLOW alive as a solo project. In 2009, he released the single “Descending” in memory of Crimson Glory vocalist Midnight, who had passed away that year.

The following year in 2010, Poland’s Metal Mind Productions released remastered versions of HOLLOW‘s two official full-length releases together in one package, ‘Architect Of The Mind / Modern Cathedral‘. Now, nearly twenty years after the band’s last full-length outing in 1999, HOLLOW, lead by Andreas Stoltz (also of Binary Creed), returns for the release of an all-new album.

‘Between Eternities Of Darkness‘ will arrive on CD from Rockshots Records on January 25th in Europe and February 8th in North America,  with the digital format of the album available on all major digital platforms as of December 6th.

The new album was mixed and mastered by Ronnie Björnström at Enhanced Audio Productions, Umeå, Sweden, and features 10 songs of modern, intensified progressive metal. Delivered over a span of 45 minutes of playing time, these tracks provide a cathartic, interwoven aural tapestry where facing adversities and searching for a place to fit in are paramount objectives.

“It’s a journey through a short period in a small family’s life. This particular period is dark and tragic, but they’ve seen better days. Light and beauty remain in memory”.

Stream the digital version of HOLLOW‘s ‘Between Eternities Of Darkness‘ below; pre-order for the physical CD format is active at this LINK.