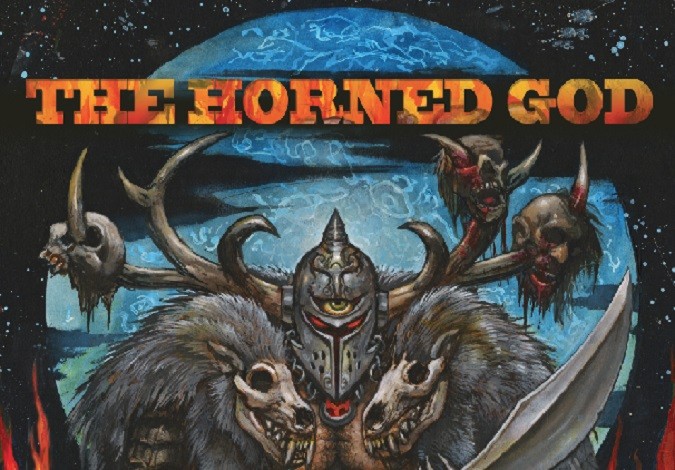 Today, Riff Relevant brings you an exclusive premiere of the song “Fodder, Flax, Fire, And Frigg” from New Mexico‘s The Horned God and their upcoming, full-length début album, ‘Volume 1‘. It arrives via Desert Records on December 14th.

The Horned God consists of three members, Dominic on vocals and guitar, Robson on bass, and Tim on drums, with attributed musical influences from bands such as Kyuss, Fu Manchu, Dozer, Mark Lanegan, and a little touch of Nomeansno. They consider themselves a ‘cosplay band’, having based both their look and thematic music on the comic book and graphic novel series by Pat Mills and Simon Bisley. A little history for those unaware…

Comic book writer Pat Mills brought the character of Slaine mac Roth to life in 1983, in his graphic novel series titled ‘Slaine’, who is a Celtic barbarian warrior king who, along with his ax – Brainbiter – and his ability to warp-spasm (essentially a berserker rage transforming him into monstrous size and appearance), defends his people against the dark druid Slough Feg. In 1989, Pat Mills collaborated with illustrator Simon Bisley and published the three-book series ‘Slaine: The Horned God’. In this series, Slaine goes on a quest to collect four artifacts that, once united, will enable him to become high king and lead his people into battle in the hopes of saving them from Slough Feg and his army.

The next adaptation of this story began in 2012, Albuquerque, New Mexico when three friends took their love of the story and combined it with their passion for music. The trio created the three-piece cosplay stoner rock – or as they call it, “Ancient Celtic inspired stoner rock, legends and lore, of love and war!!!” – musical interruption appropriately named, The Horned God.

“Fodder, Flax, Fire, And Frigg” is an ideal introduction to the band with its thick, fuzzened sludge qualities, touches of bluesy-psych metal, and underlying classic rock influences. The band shared the following declaration for today’s song saying:

“Enter the world of The Horned God. This album will pull you into a world of fantastical creatures and stories all wrapped up into a ripping, heavy stoner rock album.“

01. Intro
02. Search For The Horned God
03. Exiled
04. Battle For The North
05. Earth Goddess
06. The New Horned God
07. Hymn Of Slough Feg
08. Lunar Power
09. Fodder, Flax, Fire, And Frigg
10. Avagdu +
‘Volume 1‘ will arrive on Vinyl and Digital formats on December 14th. Pre-order is active now at Bandcamp and the Desert Records webstore.
This one-of-a-kind dynamic three-piece brings the story of Slaine to life with lyrical dialog and narratives ripped from the pages and accompanied by full costume and projected comic book cells throughout the entire performance. The Horned God has harvested the souls of countless unknowing humans and sacrificed them to the dark gods of Cythrawl. They will continue their quest to make music for the sake of making music and have fun doing it.