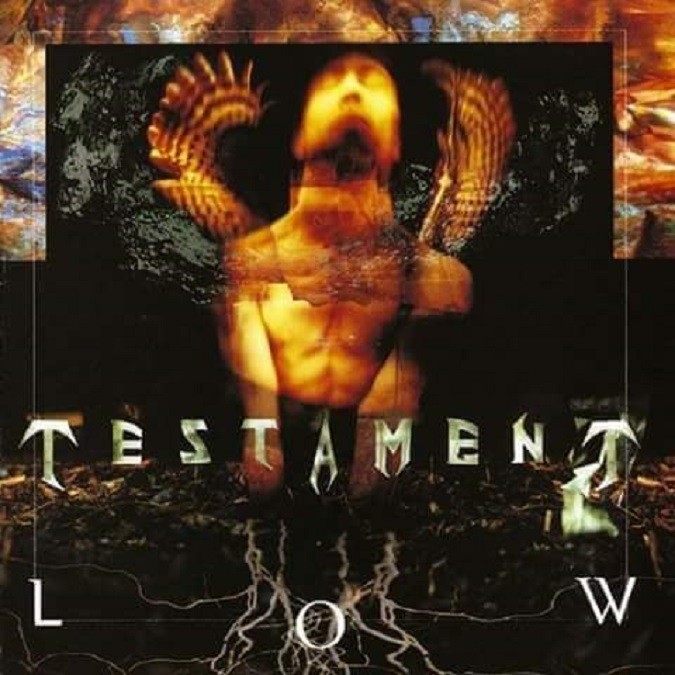 With the sub-par results still festering in their brains, the finger-pointing began, and Skolnick-already looking to expand his ever-broadening sonic palette- took his leave. Drummer Louis Clemente soon followed, and just like that, 2/5ths of the then-classic lineup was gone. Surprisingly, the band didn’t spend much time licking its wounds, and instead procuring the talents of guitarist James Murphy (Disincarnate, Obituary, Death) and drummer John Tempesta (Exodus) to keep the still-viable franchise at the top of its division.

Released in October 1994, ‘Low‘ sounded like classic Testament, but with a never-better production job courtesy of newcomer Garth Richardson that ratcheted up the brutish impact of the music magnificently. The full-on assault of lead track “Low” [official video below] shows in no small measure that the band had had enough of the music industry’s games and false promises. If the band was going down, it would be carried out on its shield.

Lead growler Chuck Billy turns in the best performance of his career thus far, his almost overpowering bellows crushingly heavy and direct (the lyric “Hey you piece of shit / Just leave the kids alone”, aimed at pedophile clergymen, remains a favorite). Murphy‘s wah-inflected solo quickly dispenses with the question of whether he would mesh well with the thrashier fare Testament dealt in, coming from the more atonally-friendly death metal scene.

“Legions (In Hiding)” continues the mid-paced devastation, a wicked octave-riff (a longtime device used by the band) serving as a way-station to string the listener along until another ripping solo by Murphy enforces the fact that this wasn’t a premature effort, the band was ready and able to move on from its earlier incarnation with nary a glance in the rearview mirror. Absolutely raging from the outset, “Hail Mary” strikes the perfect balance between catchiness and murderous intent, drum fills acting as punctuation AND narrative, furthering the song’s forward motion relentlessly.

Instrumental “Urotsukidoji” is a slightly unusual detour for the band, bassist Greg Christian getting a rare chance to step out and flex his muscles a bit beyond providing counterpoint and support to the guitar work of his comrades. “Chasing Fear” and “Ride” are two more solid tracks, bringing us to the final song, another instrumental, this one entitled “Last Call”. This is a more subdued affair, however, a melancholy song giving us a chance to wind down from an album full of so much rage and heavy-duty musical calisthenics.

Consistently engaging and dependable, Testament has been a workhorse that has seen its share of difficult times. From numerous personnel changes and poor record company decisions in the late ’90s to the devastating news of Chuck Billy‘s cancer diagnosis (thankfully now in remission), the band has since returned to their winning ways. Now deep in the heart of a three-album streak of fantastic releases, Skolnick even returning to the fold in 2005, and more enthusiastic than ever to promote the band and tour, Testament is one of the rare bands who received a second lease on life and refused to squander it.

With an almost unbelievable history of nearly 35 years of thrash excellence in their back pockets, Testament continues to impress and improve with its dedication to its craft and fan base. Nothing has ever come easy to Testament, but through sheer force of will they’ve made their mark in a crowded genre, and their legacy is finally secure.