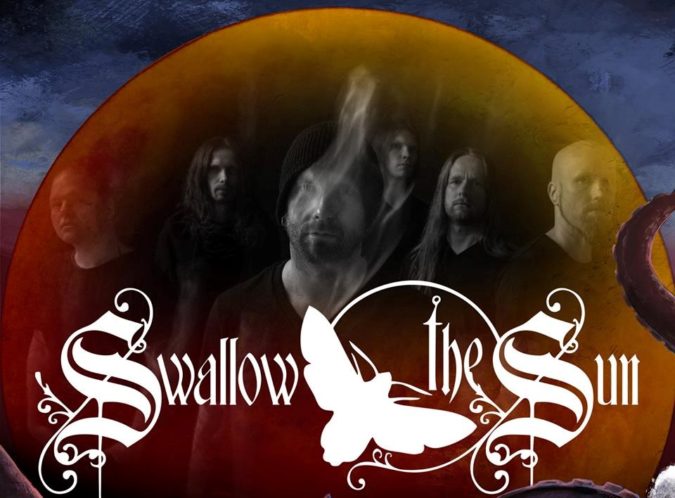 Finland’s heralds of deathly atmospheric doom, SWALLOW THE SUN, announce the arrival of the ‘Lumina Aurea‘ Maxi-Single EP and its accompanying official video.

Released this past Friday, December 21st, in a 12” EP vinyl version and digitally from Century Media Records, ‘Lumina Aurea‘ is a lengthy expedition into a shadowy expanse of haunting sorrow. Just short of 14-minutes running time, the composition is minimalist, yet profoundly striking, the sonic caress of ominous ethereal doom. Laced with Gregorian chants, a spoken narration in Latin, and a grandiose epic orchestration delivered in subtle increments, the song “Lumina Aurea” is as beautiful as it is tragic – once you know its origins, that is.

SWALLOW THE SUN‘s lead song-writer and guitarist, Juha Raivio, tragically lost his long-term partner, Aleah Stanbridge, to cancer in 2016. That loss, the resulting pain, and its resonating consequences served as an inspirational catalyst. That grief process has now expressed itself in the two-track ‘Lumina Aurea‘ EP – the B-side is an instrumental version of the song – and will continue doing so via the upcoming full-length album, ‘When A Shadow Is Forced Into The Light‘ (due out January 25th).

Juha Raivio shared this insightful commentary about the song and forthcoming album:

“‘Lumina Aurea’ is a song I would never want to write in my life. It is an open, bleeding black wound from the last two and half years of my life. But I had to write it out. I could not back down from it. The way I wrote and recorded ‘Lumina Aurea’ was so rough emotionally and physically that I think I will never talk about it public. I know this road will go on forever as a part of me, but I have also made a peace with it – that I will never have peace with it. And that the life and the journey here must still go on for a while for those of us remaining. I knew that if I would go any deeper on that road with the album as I did with ‘Lumina Aurea,’ the path would not end well. So, I quickly realized that instead I will write an album that will manifest loud and clear that after all, ‘Love is always stronger than death.’ I wanted to find that angle for ‘When A Shadow Is Forced into the Light’. This album is like a weapon for myself. A burning light, a burning torch. Victorious and proud.”

The song, “Lumina Aurea“, features guest contributions from neo-folk master Einar Selvik (Wardruna) and Italian doom metal maestro Marcus I (The Foreshadowing). In addition, there is the mind-blowing adaptation of the song to a truly cinematic masterpiece visualizer from the directing and producing duo Aapo Lahtela and Vesa Ranta of Kaira Films.

The ‘Lumina Aurea‘ EP is out now while the full-length album, ‘When A Shadow Is Forced Into Light‘, will arrive from Century Media on January 25th; find pre-order / purchase options for both at this LINK.

In related news and events, SWALLOW THE SUN recently and officially welcomed new members Jaani Peuhu and Juho Räihä into the band. Both have worked with STS in some capacity for a while, with Juho playing with them live and Jaani in the creative songwriting processes.

The band has also revealed the confirmed dates of a February 2019 tour (with guests The Man-Eating Tree), supporting the upcoming album in their home country of Finland. Find the itinerary for the “When A Shadow Is Forced Into Light Tour” below the video, with links for ticket purchases to each show.

‘When A Shadow Is Forced Into Light‘ Tracklist:

More dates to be announced soon!