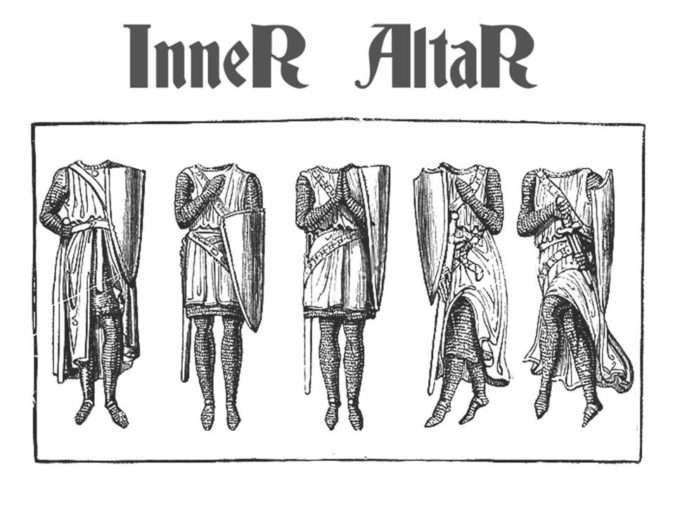 Hailing from Kansas City, Missouri, the incredible INNER ALTAR return with the premiere of the “Lives Of Fire” official video.

The track hails from the band’s highly anticipated, full-length album début, ‘Vol. III‘, set to arrive from The Company on January 18th. INNER ALTAR self-recorded and produced the album along with Alex Tunks, who handled mixing.  ‘Vol. III‘ was mastered by Tony Reed via his HeavyHead Recording Company.

“Lives Of Fire” captures the band’s masterfully executed channeling of influences from vintage doom and proto-metal bands like Pentagram, Witchfinder General, or Cirith Ungol. The band symbolically accepts the mantle of such monumental greats within their music, constructing songs built upon the almighty riff and possessing an unyielding heaviness.

In the video “Lives Of Fire“, the band, who are known by numerical designations with assumed aliases, deliver an amazing leather-clad, retro-looking visual journey enhanced by its castle setting.

Following two previous demo offerings, 2015’s ‘Vol. I‘ and 2016’s ‘Vol. II – Their Satanic Majesties Saturday Night Special‘, excitement has built for a proper INNER ALTAR record. ‘Vol. III‘ – which features illustrations from Mikey Wheeler – promises to be one of 2019’s earliest arrivals to the collective ‘Best Of’ lists that will inevitably come at this time next year.

The ‘Vol. III‘ album is available to order now at Inner Altar Bandcamp.