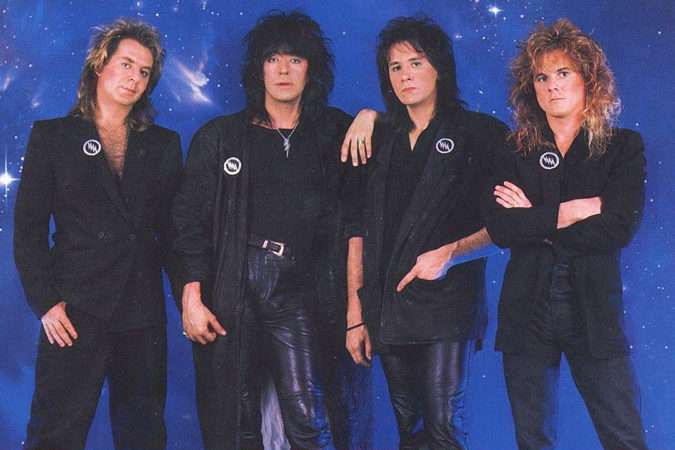 In June of 1982, guitarist Paul “Ace” Frehley negotiated his exit from arguably one of rock and roll‘s biggest acts, KISS – with the departure taking effect six months later in December.

Behind the scenes of his seemingly questionable move, Ace Frehley remained a business partner with Gene Simmons and Paul Stanley, retaining a one-quarter share in KISS. To keep that share, Frehley was under contractual obligation to not release any solo projects, at least until the year 1985, despite the fact that his 1978 solo album début (one of four individual albums issued from each member of KISS) was the most successful of the four.

Facing a handful of years where he could not put out anything as a solo artist without severely hurting his financial income and placing him in danger of legal litigation, Ace decided to use the time to assemble a band. Intended solely as a backing band for his eventual entrance into life as a solo artist, Ace soon finalized the players for it by selecting guitarist Richie Scarlet (Mountain), bassist John Regan (Peter Frampton), keyboardist Arthur Stead, and drummer Anton Fig (David Letterman’s CBS Orchestra).

However, before the new band began to record their first album together, Scarlet would leave to focus on his own solo career, which in turn led to Stead being dropped when guitarist/ vocalist/ keyboardist Tod Howarth was brought into the band.

The album, which was produced by the famed Eddie Kramer, was considered a success, reaching No. 43 on that year’s Billboard 200 while yielding a minor hit single, “Into The Night“. The cover song, originally written and recorded by Russ Ballard on his 1984 self-titled release, reached No. 27 on Billboard’s Mainstream Rock Charts and spawned an official video, as did another track, “Rock Soldiers“.

Both videos received regular rotation airplay on MTV at the time and an interesting tidbit of trivia about them – both feature Billy Ward, not Anton Fig, behind the drum kit. He was Ace’s live touring drummer in the years that Ace was working on getting his band together, demoing music, and unable to issue recorded solo material without repercussions.

Ace Frehley / Frehley’s Comet would issue a second full-length in May of 1988, the appropriately titled ‘Second Sighting‘, recorded with a new drummer, Jamie Oldaker (Bob Seger, Eric Clapton). It would peak at No. 81 on The Billboard 200 and produce two singles with corresponding music videos, “Insane” and “It’s Over Now“. Like the preceding album, ‘Second Sighting‘ featured synthesizers, samples, and sequencing provided by Gordon “G.G.” Gebert of Angel.

Prior to this album, the band released an EP in early 1988, ‘Live +1‘, featuring four songs performed live in concert and one original studio song. It was followed with an accompanying VHS video titled ‘Live +4‘, containing live performances and the band’s official videos to that point.

By the time of the next studio release from Ace Frehley in 1989, ‘Trouble Walkin”, he had dropped the Frehley’s Comet name, and the band itself had undergone several changes. Tod Howarth was replaced by a returning Richie Scarlet, and Jamie Oldaker by ex-Riot drummer Sandy Slavin (although Anton Fig and Ex-KISS drummer Peter Criss did perform some of the percussion work on the album). The album featured many guest vocalists, including Criss and Sebastian Bach.

Frehley’s Comet, the band, continued until 1995, with Richie Scarlet remaining throughout and John Regan departing in 1992. Ace Frehley put his solo career on hold to rejoin KISS in 1996 and has since resumed his role as a solo artist, releasing several solo albums in recent years with Richie Scarlet, bassist Chris Wyse, and drummer Scot Coogan – all of whom Ace unexpectedly let go earlier this year.

That takes us to where we are now, with this week’s news that former Frehley’s Comet members John Regan (bass), Tod Howarth (guitar/ vocals), and Richie Scarlet (guitar/lead vocals) have joined forces, with former Ace Frehley drummer Steve Werner, in RETURN OF THE COMET.

Together, they will celebrate their writing, recording, touring, and co-production contributions to the band Frehley’s Comet legacy by performing the hits and classic songs from the Frehley’s Comet catalog and more under the name RETURN OF THE COMET.

You can see RETURN OF THE COMET perform live at Sellersville Theater in Sellersville, Pennsylvania, on April 9th, and in Foxboro, Massachusetts, on April 12th.