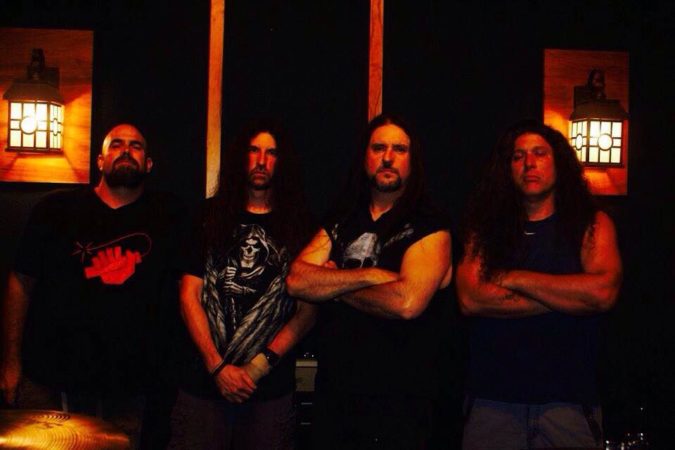 The quartet is heavily influenced by the time’s burgeoning thrash metal movement, one where bands like Venom, Slayer, and Celtic Frost, are making their bones playing insanely fast, technically aggressive heavy metal. The foursome was fired up and determined to fill the one slot within the band that at the time remained empty, that of a vocalist. Soon, singer Gary Capriotti was added and ANVIL BITCH was complete.

With help and mentoring from another Pennsylvania band, the more well-established Black Task, ANVIL BITCH is soon gigging in the regional venue circuit. In 1985, the band records and independently issues a four-song ‘Demo’, but around the time of its initial recording, guitarist Frank Wilus exits the group. Yet ANVIL BITCH remains undaunted. With the buzz about their over-the-top live outings already spreading, the tape trading metal underground quickly latches onto this short-player, and soon, the word of mouth hype about ANVIL BITCH reveals them to be an act to keep an eye on.

Another demo, the six-song ‘Arsenic And Cyanide‘, is recorded in 1986, and once again independently circulated by the now four-piece band. With this salvo of fierce steel helping to fuel even more ANVIL BITCH interest in the musical underground, the band soon catches the attention of the U.S.-based label New Renaissance Records. The label signs ANVIL BITCH and before the year is over includes tracks from the band on two compilations, ‘Speed Metal Hell Vol. II‘ and ‘Thrash Metal Attack‘.

Yet, there is still more to come in 1986, culminating in the full-length, studio début from ANVIL BITCH that same year, the now cult milestone, ‘Rise To Offend‘. Though certainly not up to today’s production standards, the twelve-track affair is a scorching, headbanging, neck ravaging record from start to finish, one bursting with energy and metallic aggression.

It contributes to kick-starting more extensive East Coast touring for ANVIL BITCH and they are soon supporting such acts as Overkill, Exodus, Motörhead, and King Diamond, among others. During this period, the band uses several second-slot, lead-playing guitarists, including the short-lived Herb Yea, but the position soon becomes a revolving door for various ax slingers.

By 1988, ANVIL BITCH implodes, with its members going in two different directions. Chuck, Dave, and John form a new band, Dominance; and Gary joins New Jersey’s Without Warning. Years go by with the guys pursuing other bands and projects. But in 2008, twenty years after ANVIL BITCH packed it in, four of the original members – John Plumley, Dave Carr, Chuck Stadulis, and Gary Capriotti – reform the now well-revered, old-school band.

This time around, they are joined by Dominance guitarist Lance Walter and they do not waste any time. In 2008, they quickly recorded and issued a three-song EP, ‘Sanctify‘, on their own that year. ANVIL BITCH picked right up where they stalled all those years past, returned to the stage, and played primarily their home region for the next couple of years.

Eventually, Lance Walter leaves the band in 2010, but ANVIL BITCH perseveres and, once again whittled down to a quartet, continues to thrill audiences just as they always have… and do so even now in 2019.