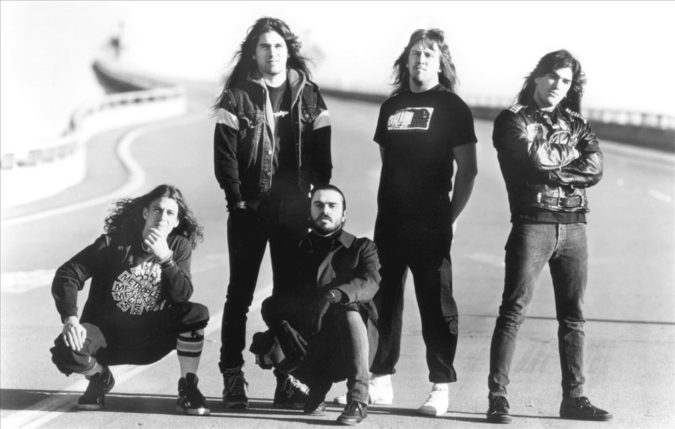 With such now-legendary bands as Testament (known then as Legacy), Dark Angel, Exodus, Possessed, Sadus, and numerous more already getting their feet wet in the Bay’s live circuit, the time is ripe for something new. Enter Death Penalty in 1985, a band consisting of members Jerry Birr (vocals), Phil Demmel (guitar), Troy Fua (guitar), Eddie Billy (bass), and Perry Strickland (drums), and their initial live unveiling, reportedly at a house party. However, not long after the event, the band changes its name to VIO-LENCE, after discovering their former name was already taken.

The following year, 1986, VIO-LENCE records and independently issues two demos, referred to as ‘First Demo‘ and ‘Second 1986 Demo‘. At this point, there are membership changes looming and soon, Birr, Fua, and Billy are replaced by vocalist Sean Killian, guitarist Robb Flynn (formerly of Forbidden Evil, a.k.a. Forbidden), and bassist Deen Dell, respectively. The band continues to play regional gigs in the northern California vicinity, where they’re clearly enjoyed by an increasingly larger and larger audience, as they and their Bay Area counterparts support bands like D.R.I., Voivod, Suicidal Tendencies, Kreator, and Mentors.

With a quickly growing reputation as a tightly knit, technically proficient, progressively edged thrash metal band, VIO-LENCE records another demo for several major labels that are scouting the band. One of those labels is MCA Records’ sister imprint Mechanic Records, which signs them after hearing 1988’s ‘Rough Demo‘, it includes a track that will soon become the title of  VIO-LENCE‘s début album.

Recorded within two studios between February – April of 1988, Music Grinder in L.A. and Alpha & Omega in San Francisco, ‘Eternal Nightmare‘ is quickly embraced by metal fans and critics alike when released that same year. Positive reviews for the album pour in as it eventually lands on the Billboard 200 chart, the band’s only album to ever enter the chart, where it eventually peaks at No. 154 while selling over 30,000 copies.

VIO-LENCE spends the next two years touring to support the album, embarking upon runs and shows with such bands as Sanctuary, Cro-Mags, M.O.D., and Nuclear Assault, while talk about VIO-LENCE continues to rage unabated. Several larger record labels are taking notice, too. Soon Megaforce Records – at the time, home to bands like Raven, Overkill, and Anthrax, as well as the aforementioned Testament and M.O.D. – signs the band to their roster.

In late 1989, VIO-LENCE enters the studio to record their sophomore studio album, one that will eventually become plagued by multiple delays, but undaunted by that, Megaforce (distributed by the major label Atlantic Records) releases ‘Oppressing The Masses‘ in 1990. Although the album’s success did not quite match that of ‘Eternal Nightmare’, it receives positive reviews and a video for the song “World In A World” is soon released to the MTV generation via Headbanger’s Ball airplay. But “issues” related to the album will increase, with one in particular connected to the lyrical content of the track “Torture Tactics“, which Atlantic Records objects to. So much, in fact, that it leads the label to destroy copies of the album in untold numbers. Subsequent reissues of ‘Oppressing The Masses‘ omit the track altogether (except the Japanese editions), making the original promotional advance cassette versions of the album the only items to contain it at that point.

However, the “Torture Tactics” saga does not end there though. In 1991, after being dropped from Atlantic / Megaforce Records, VIO-LENCE releases the ‘Torture Tactics‘ EP through Caroline Records. It includes the song, plus three other studio tracks recorded during the sessions for ‘Oppressing The Masses‘, one of which is the faked “live” song “Officer Nice (Live)“.

By 1992, internal conflicts within VIO-LENCE are brewing, and they eventually boil over, with guitarist Robb Flynn exiting the band and going on to form Machine Head. The following year sees the third studio album from VIO-LENCE issued, 1993’s Pony Canyon-released ‘Nothing To Gain‘ (recorded in 1990). The band never tours in support of the album and soon after it is released drummer Perry Strickland leaves, yet VIO-LENCE is determined to carry on and bring in new members Ray Vegas (guitar) and Mark Hernandez (drums).

VIO-LENCE start work on another demo while playing live shows with the band’s new membership, but things will not last, unfortunately. Despite working on a fourth album at the time, vocalist Sean Killian will soon depart the band as well, leaving the three-song ‘Torque‘ demo in his wake and the band’s final live show (at that time) on December 18, 1993.

The remaining members, Phil Demmel, Deen Dell, Ray Vegas, and Mark Hernandez, form a new band, a thrash / groove metal unit that adopts the name Torque. With Demmel now also handling lead vocal duties, the band re-records the final VIO-LENCE demo, plus another in 1995, and obtain a recording contract with Mascot Records where they release a sole self-titled album in 1996 (which is being reissued with four bonus tracks, new liner notes, and more on January 18th, via Mascot Records).

In the early 2000s, Testament and Dublin Death Patrol frontman Chuck Billy is diagnosed with cancer, thus a co-benefit show, Thrash Of The Titans, is arranged for him and fellow cancer-stricken musician, Chuck Schuldiner (Death, Control Denied). It is both cause and catalyst for the reunion of several then-defunct Bay Area bands, including Heathen, Forbidden Evil (Forbidden), Death Angel, pre-Testament band Legacy, and VIO-LENCE (minus Robb Flynn, who declined to participate). As a result of this 2001 show, Exodus, Heathen, and Death Angel all officially reunite, with Forbidden following suit in 2007.

2005 would see the re-release of VIO-LENCE‘s ‘Eternal Nightmare‘ and accompanying it, a 7-inch vinyl recording that contained two tracks from the band’s 1986 demo, as well as a previously unreleased track. Only 1,000 copies were produced and pressed by Bone Crusher Records and while the collectible was well marketed and advertised, disagreements between the band and the record’s producers result in VIO-LENCE only being able to distribute and sell the 500 copies given to them by the label. About 100 copies of those rarities are sold through a Seattle record store, the only known store to stock the item for sale to the public.

A two-disc DVD release ‘Blood And Dirt‘ from Megaforce Records arrives in 2006, with Disc 1 featuring a documentary on the band. It contains rare videos, pictures, and interviews with everyone who was in the band, as well as friends, managers, other bands, fans, etc. Disc 2 has several past live performances from VIO-LENCE.

In 2017, singer Sean Killian was diagnosed with stage-four liver cirrhosis related to a genetic condition called hemochromatosis, and a benefit on his behalf was organized. “Killian On Command: An Evening Of Vio-Lence” took place at The Midway in San Francisco, California on January 20, 2018. It included performances by the members of VIO-LENCE and numerous Bay Area bands. In November of last year, Sean’s wife Dana shared postings on social media that cryptically confirmed her husband had recovered from his illness.

That brings us up to speed now. Just two months after getting the thumbs up concerning Sean, news comes that VIO-LENCE will reunite for a one-off concert on Saturday, April 13th, at the Oakland Metro in Oakland, California. Not just any concert either, but one where the band will play their legendary début album, ‘Eternal Nightmare‘ in its entirety to mark its 30th anniversary. The band’s lineup will consist of guitarist Phil Demmel, vocalist Sean Killian, bassist Deen Dell, drummer Perry Strickland, and guitarist Ray Vegas, and the show has since sold out.

The show’s quick sell-out has lead to the scheduling of a second show the following day, a matinee appearance on April 14th, where VIO-LENCE will NOT be playing ‘Eternal Nightmare‘ in its entirety, but an altogether different set.