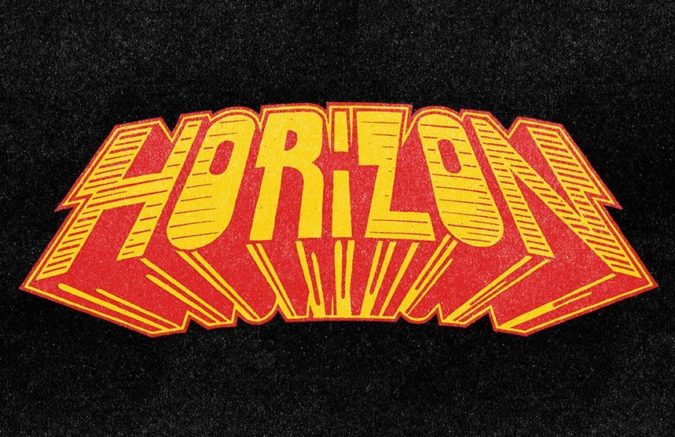 Since 2011, HORIZON – Nicolás D’Andrea (vocals / guitar), José G. Beamud (drums), and César Tenorio (bass / synths) – have worked diligently to develop their craft. Like a ship that is able to traverse celestial planes, the HORIZON craft has repeatedly rocketed into the consciousness of underground rock music fans thanks to multiple stages of their earlier releases: ‘Tales From Hydra Cluster‘ (2016), ‘The Last Man In Terminus‘ (2014), the ‘Mk2 (Bonus Tracks)‘ EP (2014), and ‘Mk1‘ EP (2012).

Now the crew of HORIZON is back with their most ambitious work to date, as the ascending lift of the ‘Pigs‘ EP provides a most dynamic delivery of its payload. From the energetic swagger of the introductory title track “Pigs“, with its fast-burning paces offset by crunchy passages, to the throwback metal vibes of the synth-tinged “Hate“, the trio keeps it interesting.

Then there are the fantastic seven-plus minutes of “Greasy Blood“, a rolling ride of stellar, tight-knit grooves and sweltering guitar. All the while, dynamic vocals soar and glide across the music while precisely guided bass lines are bubbling underneath, covering the song from top to bottom in awesomeness. I also find myself especially digging the latter portion of this EP, beginning with the mind-melting nuances of the lysergically augmented instrumental, “Acid Owl“.

Lulling the listener into a sense of tranquil flight upon the climbing wings of this number, the song is the ideal intro to the fifth and final track, the magnificent “Goddess Of Truth“. This is the pinnacle of the recording, the culmination of all that has played out prior, and without question my favorite cut. It quickly ejects you from the semi-sedate state enticed by “Acid Owl” by means of electrifying, over-the-top riffs served in a molten stew of staggering jams. Vibes of Seventies greats quickly swell up as this song hits cruising speed, embellished with near-perfect vocals, and decked out with elaborate jamming; “Goddess Of Truth” is a song you won’t soon forget.

I listened to it on repeat countless times and it only got better with each listen. To be honest, this holds true for all on the new ‘Pigs‘ EP from HORIZON. There is no denying the hard rock appeal it presents, the scope of styles, the range of its intensities, and ultimately, the greatness of its contents.

You need to discover it all for yourself now, either by way of the stream in this review or going directly to Bandcamp for further streaming and purchase options HERE.