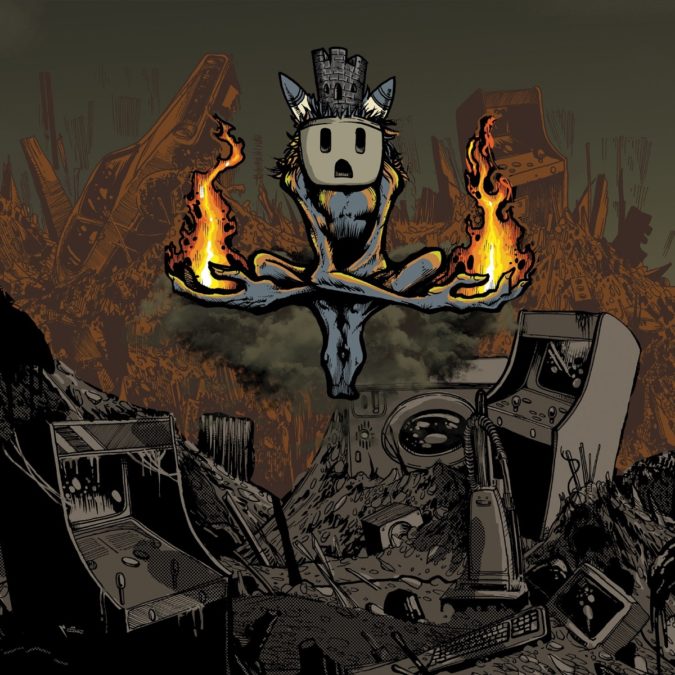 After nearly four years since their last release, Palace In Thunderland band surprises us with a new album in 2019. We have the details on that new record, plus the first single “Vicarious” and its accompanying video.

‘The King Of The Empty Aeon‘ is the brainchild of Andy Beresky (guitars, vocals), Adam Abrams (bass, keyboards, vocals), and Monte Newman (guitar, vocals). A nine-song concept album, its creation heavily inspired by Pink Floyd’s ‘Animals‘, Husker Du’s ‘Zen Arcade“, and Rush’s ‘2112‘. While the musical interpretation may be heard as a single song divided into distinct parts or a diverse set of songs joined to make a whole, ‘The King Of The Empty Aeon‘ is the most focused and complex release from the band thus far. The story…

The King of the Empty Aeon, the Maitreya, is the future Buddha referenced by pioneering Japanese Soto Zen monk, poet, and thinker Eihei Dogen. The historic Buddha, Siddhartha Gautama, sought enlightenment after his father’s deceptive attempts to shield his son from suffering and mask reality in a false world of pleasure were unveiled. It was foretold by the hermit sage Asita that the boy would become either a legendary king or an enlightened Sadhu (Holy Man). But in an age of technological advancement, social media, and 24-hour news cycles, such a scenario would be an impossibility.

What causes and conditions would drive one living in this modern age to seek enlightenment, to become a fully actualized human being? This is the story of ‘The King Of The Empty Aeon‘, told as only the Massachusetts sonic prophets Palace In Thunderland can tell. You have just witnessed the witnessing of the witnessor…

The album will be available on February 22nd on CD, Cassette, and Digital Download and Streaming via Fuzzdoom Records. Vinyl pressing will be available through Cursed Tongue Records on April 12th. The official video for “Vicarious” was created by Adam Abrams. The band shared some insight into the new song:

“We chose Vicarious as the first song to premiere because it’s the most immediate, with those gut-punch post-hardcore meets Sabbath riffs and the big, bouncy, energetic middle section. It’s a song about when the Maitreya starts trying out different things in life and ultimately rejecting them, just this anthem to denunciation that shows the contentious inner dialogs that are a constant theme of the album. Seemed like a good jumping off point for folks to jump into!!”

“Adam came up with the basic idea for the video. We worked through a couple of ideas, different drafts, and finally arrived at this version. We had a more straight forward video at one point, psych effects and outer space, our normal spiel. That felt cliched, so we rethought it and we like this a lot better. It shows slices of human life, living in this society along with other life on this planet, and some spaciness in there as well. I think that it really works, there’s a universal aspect in this imagery and the sequence.”

‘The King Of The Empty Aeon‘ was produced by Palace In Thunderland and Dan Whitlock, with all songs by Palace In Thunderland. Drums for the record were performed by Matt Netto, with recording by Justin Pizzoferrato at Sonelab in Easthampton, MA. Guitars and bass were recorded by Dan Whitlock at Thunderland Compound in Ludlow MA. Vocals recorded by Dan Whitlock in Andy’s Kitchen, Northampton, MA. The album was mixed by Justin Pizzoferrato and mastered by Mark Alan Miller at Sonelab. The cover artwork is by David Paul Seymour.

– All vinyl variants come with a double-sided insert and two stickers.