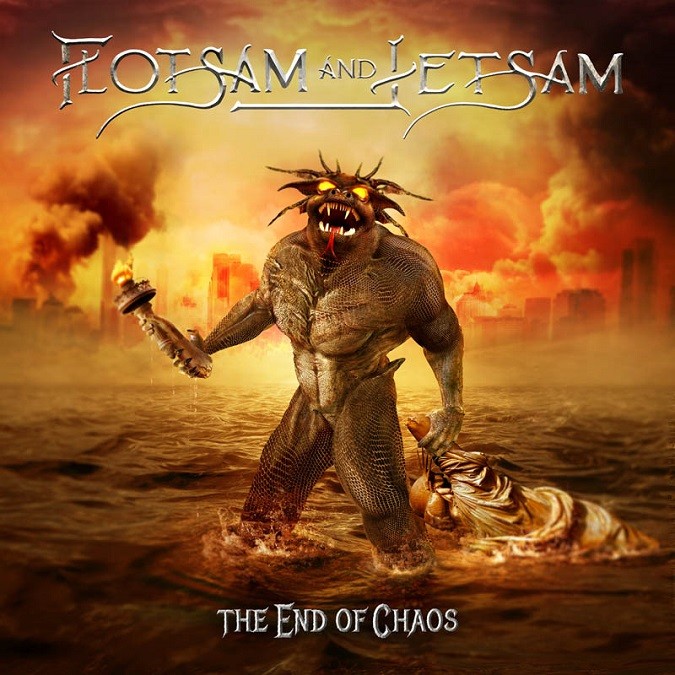 In 2016, almost exactly thirty years from their rightfully acclaimed, brilliant début, ‘Doomsday For The Deceiver‘, FLOTSAM AND JETSAM seemed to have come almost full circle.

Their self-titled effort caught zero of the ridiculous, unjust flack the many releases in between had. Virtually every aspect of the album was honed and locked in, making for a direct, purist thrash/speed listen. Did I personally miss the band’s oft-underappreciated penchant for experimentation? Initially, well… yeah, but, there was no denying that focused roar; a roar so intense, it seemed unlikely to be surpassed.

The departure of respected drummer Jason Bittner (to join OverKill) after the recording and subsequent tour seemed to make any concerns or wondering that much more reasonable. Bittner’s reputation is one of bringing newfound energy to any project he enters into.

So, here in 2019, FLOTSAM AND JETSAM have a new listen on offer. Does ‘The End Of Chaos‘ return to the more adventurous paths of old, or will it move into even more aggressive territory than ever?

I’ve never been a track-by-track elaboration type of guy, and I certainly won’t start the practice here. Just as the initial single and video release “Demolition Man” (streaming below) indicates, ‘The End Of Chaos‘ is nothing short of a fire-breathing, relentless full-length that pins the listener to the wall throughout each one of its thirteen tracks. There is no let-up to be had in its formulation, so the devil really does end up in the details.

The first notable factor is production. Unlike some long-established metal outfits, FLOTSAM AND JETSAM did not shy away from applying a modern approach to their old-school fury. The punishing nature of the songs is highlighted by a very precise, clinical sound that has fatness on the bottom end, pristine highs, and ample instrument separation within both. The warmer nature of its predecessor is toned down, and still definitely works.

Next is the previously touched upon man-behind-the-kit issue. So, who exactly plopped down on the vacant drum stool? Why, none other than well-traveled veteran Ken Mary of Fifth Angel fame, not to mention a slew of other quality hard rock outfits. His entry into the Flotsam camp makes for not only for his heaviest project to date, but he also manages to outshine Bittner’s previous contribution (which was mighty strong), straight across the boards. Mary goes ballistic and puts on one hell of a drum clinic. Simple as that.

I really couldn’t properly continue on this particular path without stopping for a comment or two on the band’s backbone and one true constant, vocalist Eric “A.K.” Knutson. Knutson, despite having a slightly more grizzled style these days, is still totally on top of his game. He can, and will, pull out the high-end when needed with complete conviction, making the hard-ass venom present in his biting modus operandi that much more potent.

13. Another One (Bonus – Japan Edition only)

And finally, there’s the music itself. If you’re going mash that pedal to the floor in the ferocious manner on display here, you still have to throw in the proper shading, and there is plenty of that. With Mary’s and Knutson’s contributions already in the can, it’s time to acknowledge bassist Michael Spencer, along with guitarists Steve Conley and Michael Gilbert. Without the former’s nimble low-end and the latter’s strong melody laid over the piledriver riffs, this record could have gone a very one-dimensional route. Thanks to them, it’s a complete non-issue.

‘The End Of Chaos‘ is pretty much a perfect way for me to start my year of reviews. It’s an American speed-thrash powerhouse. It’s so damn good, in fact, that it immediately plows its way to near the top of their impressive catalog. Nothing will ever top their glorious début in my eyes, but man, this is their most aggressive release to date and pleads its case daaaaaamn hard. Impressive to the extreme.

Grab a copy of ‘The End Of Chaos‘ at AFM Records. Flotsam And Jetsam are also touring, find dates.