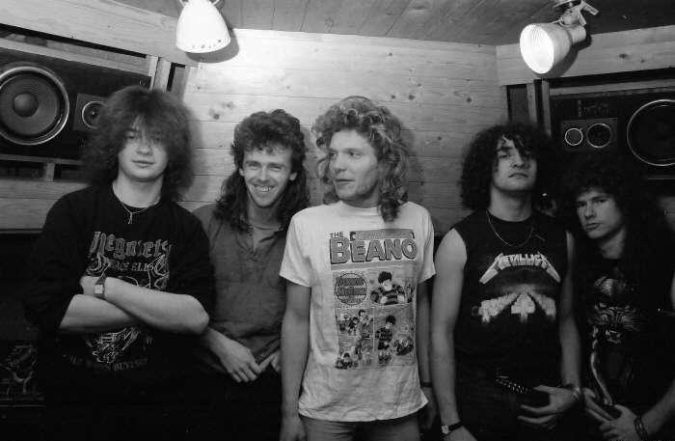 It is the middle of one of metal’s most productive decades, the 1980s, when the bassist for Ubited Kingdom thrashers Deathwish, Damon Maddison, decides to leave the band to pursue recording his own material.

He manages to convince Nathan Maddison, the drummer of Deathwish and also his brother, to come along with him. The pair recruits singer Mike Keen into the mix and in 1987, after adopting the name HYDRA VEIN, record a three-song demo, ‘The Reptilliad.‘ They utilize contributions from two guitarists on the demo, Dave Brunt (a.k.a. Dave Deathwish) and Alan Wheatley-Crowe, but due to the pair’s ongoing projects elsewhere, the credits display them collectively under the name “Jack Kartoffel” (after a one-liner from the film “Top Secret“).

The demo quickly garners positive press and reviews in several underground ‘zines, as the band’s fierce thrash intensity attracts the attention of the Metalother Records label, who offer the band a one-album recording deal. While these events are transpiring, HYDRA VEIN is actively seeking guitarists and eventually, Stephen Davis and Dan Ranger are welcomed into the band. After several months of songwriting, rehearsal, and preparation, the band enters Blue Box Studios to record their début album in early 1988.

Though initially recorded and wrapped up pretty quickly, the album, ‘Rather Death Than False Of Faith‘, would be delayed for several months due to certain major retailers refusing to carry it. Their reluctance is founded on the belief the album title might cause offense in the wake of “The Eniskillen Outrage” (public anger over the bombing at a War Memorial event that kills 11 people in Northern Ireland). It is eventually released near the end of 1988, immediately gaining traction, due to positive exposure in the metal press, partially helped by airplay on Tommy Vance’s Friday Rock Show on BBC Radio One.

The album is quickly attracting more and more attention and it soon appears a U.S. release through Three Cherries is in the works. However, the deal falls apart, resulting in another crucial delay of the album’s arrival into an all-too-important market. Borivoj Krgin’s Mean Machine label does eventually pick up the album, yet by that time momentum and impetus have been lost. Back home in the UK, HYDRA VEIN is at least playing live often. Despite their own headline gigs or supporting the likes of Sodom, frustrations are building and taking their toll, and the band is beginning to fray. After one particularly eventful gig headlining Brighton’s Level Festival, a minor riot kicked off during the group’s set and guitarist Dan Ranger becomes the first member to leave the band.

The remaining members would continue as a four-piece until a series of Spinal Tap-esque incidents on the road forces a decision to split from Metalother Records, as well as part company with guitarist Stephen Davis. Luck would have it that another label, RKT Records, quickly presented their offer of another one-album deal, which the band jumped at. Through advertising in some local “seeking musicians” type periodicals, a new pair of guitarists – Paul Bate and Jon Balfour – soon enter the HYDRA VEIN fold. They, along with Mike Keen and the Maddison brothers, enter Square Dance Studios in summer 1989, to record the act’s sophomore album, ‘After The Dream‘, which is released before the year’s end.

Although considered by many to be technically superior in nearly every department to its predecessor, as well as again drawing glowing critical praise from reviewers, ‘After The Dream’ doesn’t quite generate the same excitement as the début. It is a disheartening experience for the crew and within a year of the second album’s release, HYDRA VEIN disbands. They remain that way for almost 30 years, with no activity from the band whatsoever, although their two releases are re-issued in 2007, as a two-on-one type compilation.

Just this month, unexpected news arrived. A contemporary version of the band, consisting of the band’s three surviving guitarists, Dan Ranger, Stephen Davis, and Paul Bate (Jon Balfour passed away in 1992), along with bassist Damon Maddison and his drumming brother Nathan Maddison will perform at the 2020 edition of BROFEST in the UK.

One of the big questions on everyone’s mind is related to the vocal department, as in who will front HYDRA VEIN since singer Mike Keen reportedly took his own life in 2002. That has now been answered with none other than former Angel Witch / Tygers Of Pan Tang / ShadowKeep vocalist Richie Wicks stepping up to the mic!