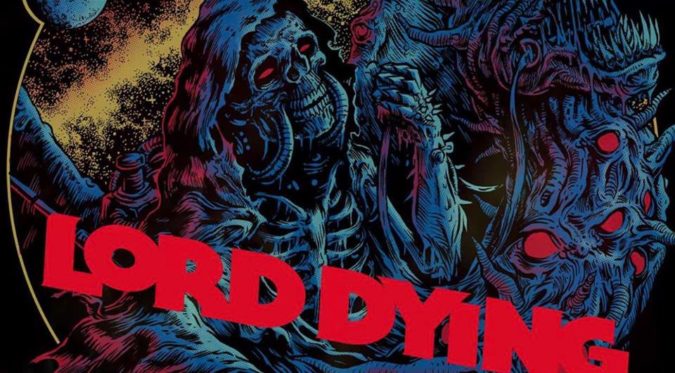 It has been nearly five years since we last heard from Portland, Oregon’s purveyors of aggressive metallic sludge, LORD DYING. The last was by means of their 2015 outing, ‘Poisoned Altars’.

The band’s absence will soon be rectified, as LORD DYING announce their much-anticipated third studio album ‘Mysterium Tremendum‘, to be released worldwide on April 26th via Entertainment One (eOne). The conceptually themed album boasts eleven tracks that examine the many facets of dying and what may or may not exist in the afterlife. It was recorded at Los Angeles’ West Valley Recording Studios in August of 2018 with engineer Mike Plotnikoff (Fear Factory, In Flames) and mastered by Howie Weinberg (Slayer, Nirvana, Pantera, Red Hot Chili Peppers).

The core at the heart of LORD DYING, guitarist and vocalist Erik Olson and guitarist Chris Evans, have been making music together since fifth grade and state ‘Mysterium Tremendum‘ is the album they have always sought to make. The pair worked tirelessly on these songs over the course of a year-and-a-half, using programmed drum parts, and sending ideas back and forth. Joining Olsen and Evans in the recording lineup of LORD DYING are bassist Matt Price and drummer Chase Manhattan.

“It was the first time we were really able to put things under a microscope. We set out to write a record about life, and it ended up being about death.“

‘Mysterium Tremendum‘ is easily LORD DYING‘s most musically diverse outing yet, one that expands upon elements of the past in unexpected ways. The results are seamless and stunning, things you can discover for yourself by checking out the first single to arrive, “Envy The End“, along with the album details.

01. Envy The End
02. Tearing At The Fabric Of Consciousness
03. Nearing The End Of The Curling Worm
04. The End Of Experience
05. Exploring Inward
06. Severed Forever
07. Even The Darkness Went Away
08. Freed From The Pressures Of Time
09. Lacerated Psyche
10. Split From A World Within / Devoid Of Dreams / Death The Final Loneliness
11. Saying Goodbye To Physical Form