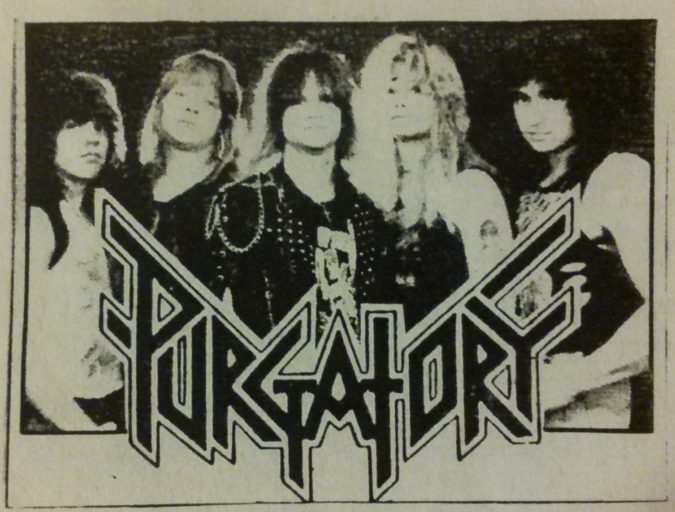 There are repeated examples of bands that operated under the name PURGATORY, but today’s Oldschool Sunday subjects hailed from Cleveland, Ohio, and first formed in 1984.

That is the year that Jeff Hatrix (aka Jeffrey Lewis Hetrick, aka Jeffrey Nothing – yes, THAT Jeffrey Nothing – of Mushroomhead) returned to his hometown of Cleveland, after a brief stint as the singer for the Chicago based band White Heat, and NI4NI before that. Reuniting with his former NI4NI bandmate, drummer Ken Easterly, they adopted the name PURGATORY, after filling out the band’s roster with bassist Mark Alexander and guitarist Greg Perry. (Another guitarist, Mike Tucker, was briefly in the band some time in 1984.)

Within a year of their formation, PURGATORY issued a four-song, self-titled EP (streaming) through J.U.F. Records, one that quickly helped them develop a loyal regional following and fan base for its high energy, traditional metal, and shredding thrash ferocity. The quartet quickly followed it with the six-song ‘Purgatory Demo’ that same year (1985), as they worked to galvanize their fans as a go-to support act when upper-tier bands played the northern Ohio region, sharing stages with the likes of Metal Church, Fates Warning, Lizzy Borden, and more.

The hype about PURGATORY was growing to the extent that it soon led to several recording offers, with the band eventually signing with the Medina, Ohio-based Auburn Records. Realizing the advantages of having a two-guitar lineup, they soon brought in a second guitarist Randy Gonce and recorded their début album, ‘Tied To The Trax‘, released in 1986 (European release via Germany’s Steamhammer Records). The album’s dizzying, technical guitars, solid rhythms, and dynamic vocals (ranging from soaring highs to straightforward, aggressive deliveries), were an immediate hit with fans of the band and underground metal in general.

However, not long after their initial album release, both guitarists, Greg Perry and Randy Gonce, exited PURGATORY. Perry was the first to leave (replaced by Ed Whittingler for a very brief period), and was soon followed by Gonce. Before too long, the band had two new guitarists in the fold, Frank Romano and Dave Felton (Mushroomhead, Integrity). This era of the band spent the next couple of years doing extensive road work and completing tours with bands like Possessed, At War, and Destructor, among others. They also wrote an entire full-length second album, tentatively titled ‘Dark Alley Surgery‘ (title track live stream), that was never released.

1988 would be a year of immense internal changes for PURGATORY, which began with Perry’s second exit, opening the door for guitarist Tony Ross to come in. Perhaps the biggest would be the departure of Jeff Hatrix (forming his own eponymous named act Hatrix in 1989) who was replaced by new vocalist Andy Boyer. It was this line up of Boyer, Ross, Easterly, Romano, and Alexander that would record and issue the three-song, limited release ‘Dr. Pain‘ EP (cassette only) for J.U.F. Records in 1989.

This would be the swan song offering from PURGATORY, as they officially dissolved in 1990. In the years since, various members of the band have established themselves in other bands like Chemikill, Stryker, Victor Fist, Zone Eleven, Attaxe, Zyklone, Blessed Realm, Centurion, and others. Jeffrey Hatrix would adopt the name Jeffrey Nothing and find success with some other former PURGATORY members, as one of the singers in Mushroomhead (between 1993 and 2018), and now fronts the band Nothing.

After a one-off reunion show in the early ’90s, one that saw all former and last active members of PURGATORY play sets divided by vocalist eras – Jeffrey Hatrix and Andy Boyer – the band remained inactive until a reunion at the Brave Words & Bloody Knuckles’ Six Pack Weekend festival on June 3rd of 2004, to celebrate Auburn Records’ 20th anniversary.