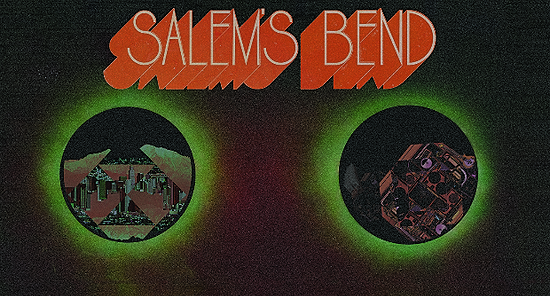 The Los Angeles, California-based, retro garage rock trio SALEM’S BEND announce a multitude of happenings and events they have going on, beginning with news of their next studio album.

The new album ‘Supercluster‘ is set to arrive on all formats, via Ripple Music on May 24th, and we have the album artwork plus a new single to share with you. An extensive touring schedule is planned for the band, which includes runs in the U.S. with Mountain Tamer, as well as the United Kingdom and Europe with Psychlona, and includes some festival appearances.

The first song to surface from the upcoming SALEM’S BEND outing is entitled “Spaceduster“, a number with fuzz heavy riffs and magnetic grooves that covers a lot of territory in its almost five and one half-minutes running time. Starting out with a subtle intro, the song quickly becomes an explosive ripper, with scorching guitars and fiery jams before a total one-eighty into a heady psychedelic realm of sound. Can you dig it?!

Once again, ‘Supercluster‘ from SALEM’S BEND will be released May 24th via Ripple Music. Before it arrives, the band will embark on some incredible road treks, including the “Space Cowboys SXSW Tour 2019” with Mountain Tamer in the U.S. (with an SX Stoner Jam ’19 stop). That will be followed by a trip across the pond to join their label mates Psychlona for the “North European Tour 2019” with dates in the UK and Europe, including an appearance at DesertFest London. You can find the full itineraries for both runs listed below.