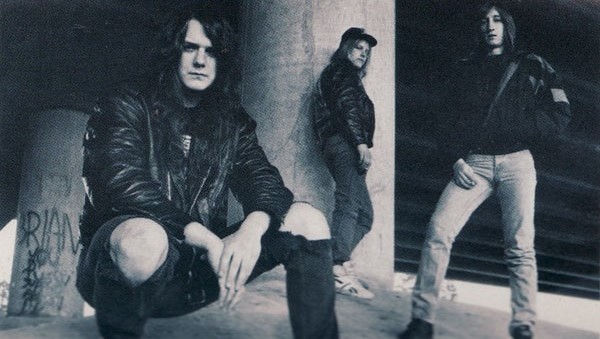 Depending on who you ask, the origins of Seattle, Washington’s FORCED ENTRY date back to either 1983 or 1984, when they were known as Critical Condition.

Formed by the duo of guitarist/vocalist Brad Hull and bassist / vocalist Tony Benjamins, some time would pass before the final piece of the band would be settled, a drummer. Enter Colin Mattson to Critical Condition, a cover band that played songs from KISS, Iron Maiden, AC/DC, and Judas Priest.

In 1986, the trio changed their name to FORCED ENTRY and began crafting their own original music, releasing three demos between 1987 and 1988: ‘All Fucked Up‘, ‘Thrashing Helpless Down‘, and ‘Hate Fills Your Eyes‘. These demos garnered the band much attention with fans, critics, and publications – ‘Thrashing Helpless Down‘ helped them win the 1987 Northwest Music Award for “Best Metal Band”. This was at a time when there was some serious competition in their home region, with bands like Metal Church, Sanctuary (which Brad Hull would later join), Panic, Bitter End, and Coven.

In 1990, FORCED ENTRY was included on the EVR Bellingham label’s “Both Parts Live: Northwest Music Video Compilation Vol. 2” VHS collection of clips that also included Skin Yard, The Accüsed, Panic, Coffin Break, and Sky Cries Mary. Like the process for their previous album, FORCED ENTRY began recording their sophomore album in late 1990, and six months later, ‘As Above, So Below‘ arrived.

Although the album received positive reviews, it achieved neither the underground success nor the critical acclaim of its predecessor, despite the album’s contents being considered of a more aggressive nature. The album spawned two official video clips that received regular airplay on MTV’s Headbanger’s Ball, “Macrocosm, Microcosm” and “Never A Know, But The No,” but the writing was on the wall so to speak. Relativity / Combat Records soon dropped FORCED ENTRY and finding themselves without a label, the band did not tour for the ‘As Above, So Below‘ release.

Despite any lack of label backing, FORCED ENTRY would continue to play live shows while working to land another label recording contract. In 1995, they released a four-song EP, ‘The Shore‘. While attributed to the Morning Wood label, this EP is commonly designated as an independent release from the band. Sadly, there was no resurrecting their earlier glories and in August of that same year, FORCED ENTRY played their final live show in Seattle (reuniting only once since for the Abrasive Rock Festival in 2002).

Guitarist Brad Hull has remained active in the music scene in the years since, forming the band L.S. Diablo in the late 2000s and, as mentioned earlier, joined the reformed Sanctuary in 2011. There he appeared on the band’s long-awaited third record, 2014’s ‘The Year The Sun Died‘, as well as subsequent tours. Benjamins and Mattson jammed for a period of time in a local band called DUMT, but are currently both retired from the music industry.