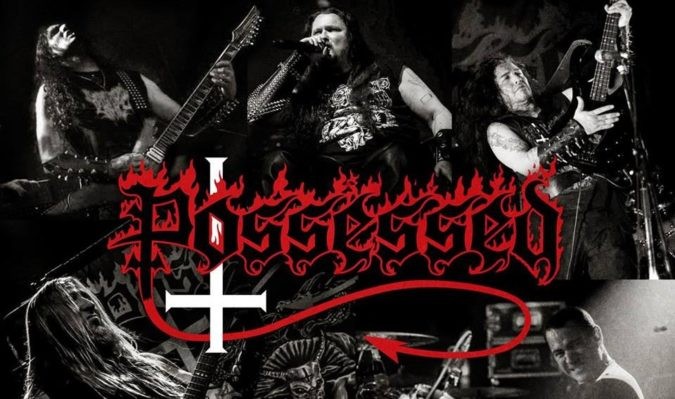 Very few bands within the historical timeline of heavy metal have a distinction referencing them as the originators of an all-new musical style that would become a stand-alone genre.

San Francisco’s POSSESSED is such a band, one that formed in 1983, and went on to revolutionize an aggressive playing style that would become known as death metal to some, speed or thrash metal to others. Yet before all of that, there was guitarist Mike Torrao, drummer Mike Sus, vocalist Barry Fisk, and bassist Jeff Andrews‘ garage band, POSSESSED. This would be a short-lived incarnation of the band, one that had only begun writing music when Fisk then committed suicide, leading in part to Andrews no longer wishing to participate in the band afterward.

Around the same time, Blizzard, another local band with vocalist Jeff Beccera and guitarist Larry Lalonde in their lineup, was also just getting started. For whatever reasons, Beccera soon left Blizzard to join on as bassist (Andrew’s replacement) in POSSESSED, also taking on the role of vocalist in Fisk’s absence. A second guitarist, Brian Montana, was recruited as well, and the second incarnation of POSSESSED came to be.

The quartet of Becerra, Sus, Torrao, and Montana spent the next year practicing and honing their sound by playing local shows. In 1984, POSSESSED recorded and then independently released their first demo, the three-song ‘Death Metal‘ (heed the title), while playing home region shows with the globally recognized Metallica and Exodus. That same Exodus, whose ‘1982 Demo’ featured former POSSESSED bassist Jeff Andrews, got a copy of ‘Death Metal‘ to Metal Blade’s Brian Slagel, who was immediately interested in the band. So interested in fact, he included one of the tracks, “Swing Of The Axe“, on the label’s ‘Metal Massacre 6′ compilation.

Despite that period’s growing underground extreme metal scene, POSSESSED was a unique unit with their own sound. It was one rooted in incredibly fast, technical twin-guitar pyrotechnics, dizzying rhythmic tempests, and Beccera’s then-unusual style of guttural type vocals. After the release of the compilation from Metal Blade – who did not actually sign POSSESSED – guitarist Brian Montana left the band, opening a door for Beccera’s former Blizzard bandmate, Larry Lalonde, to join the rising act.

However, that compilation, along with another independent, three-song recording, ‘Demo 1985‘, drew the attention of Combat Records. That same year, the label signed the band, who then recorded their landmark début with producer Randy Burns, its title inspired by the biblical Book Of Revelation, ‘Seven Churches‘ (distributed in Europe by Roadrunner Records). Keep in mind that Jeff Becerra and Larry Lalonde were reportedly still juniors at Pinole Valley High School at the time, and had just contributed to creating one of metal’s more monumental recordings. Not too shabby when you fully contemplate the influential and historical significance of the album and its ultimate legacy.

Before the year was over, POSSESSED would fly to Montreal, Quebec to play alongside Celtic Frost, Destruction, Voivod, and Nasty Savage at the WWIII Weekend Festival. Their biggest show to date in support of the ‘Seven Churches’ release, this was followed by more extensive touring for the album, including a 1986 show with Slayer and Venom at the Kabuki venue in POSSESSED‘s hometown of San Francisco.

This activity was quickly followed by the recording and then release of sophomore album ‘Beyond The Gates‘ in 1986, and ‘The Eyes Of Horror‘ EP in 1987, both through Combat Records. The reception to the band’s second full-length outing in 1986 was a bit mixed, attributed by many to a perceived alteration in the band’s musical style. There does seem to be an inclination toward more technically oriented songs, though the sound quality of the album is a bit muddier, perhaps in part to utilizing a different producer, Carl Canedy.

Despite these so-called issues, reverence for POSSESSED continued to grow, along with touring offers for the band. They soon embarked upon a European trek with Voivod and Deathrow, and following that, a U.S. run with label mates Dark Angel, the now legendary Gates Of Darkness tour, a name inspired by both of the band’s releases at the time. The “Darkness” portion referencing Dark Angel’s sophomore record out at that time, ‘Darkness Descends‘.

An interesting aspect to ‘The Eyes Of Horror‘ EP release is the identity of the person that produced the short player, none other than guitar virtuoso Joe Satriani. If you are a well-rounded and knowledgeably diversified metalhead, then you surely know that (former) POSSESSED guitarist Larry Lalonde is considered a revolutionary guitarist himself. That status is not solely related to his time in this band but was developed in part by his being in the underrated progressive metallers, Blind Illusion. Plus, there is the band that he and his fellow Blind Illusion bandmate, bassist Les Claypool are so well-known for now, Primus.

At the time the ‘The Eyes Of Horror‘ EP was released, POSSESSED were experiencing growing internal strife and tumult. They did manage to support the release, somewhat, by playing two shows with Megadeth before it all came crashing down and they disbanded in 1987. This was followed by Jeff Beccera‘s being shot in a robbery that ultimately lead to his being paralyzed from the chest down.

Around this time, Mike Torrao recruited new musicians Bob Yost (bass), Walter Ryan (drums), and Mark Strausberg (guitar), and recorded the two-song ‘Demo 1991‘, followed by the four-song ‘Demo 1993‘. However, this version of POSSESSED was plagued with unstable membership changes during this period. The band managed to play three shows though. Eventually bassist Paul Perry would replace Yost, yet things didn’t last and by 1993, POSSESSED were defunct once again.

Something that was not chaotic or fleeting was the metal world’s recognition of and appreciation for POSSESSED. During those years, numerous splits, compilations, live recordings, home videos, box sets, etc. would be issued. This included ones like Century Media‘s five-disc split, ‘Victims Of Death – The Best Of (Decade Of Chaos)‘ that featured full albums from POSSESSED, Dark Angel, Exodus, Forbidden, and Death. Also Agonia Records‘ ‘Resurrection‘ (2003 split matched up with Side Effect), and 2004 live outing, ‘Agony In Paradise‘.

2007 would see Jeff Beccera announce his return, and using the name POSSESSED, he would take the stage at that year’s famed Wacken Open Air festival in Germany. However, the band itself consisted of players from Cali death metal band Sadistic Intent – bassist Bay Cortez, drummer Emilio Marquez, and guitarists Rick Cortez and Ernesto Bueno – who now backed the vocalist-only, supposedly disabled Jeff Beccera. By all accounts, the show was a mind-blowing presentation of this now larger than life musical entity, a headline set at Los Angeles’ Gathering Of The Bestial Legions III festival followed.

This same line up of POSSESSED got together again in 2010, to appear at the eighth annual edition of the world-famous Maryland Death Fest, with that followed by a U.S. tour with Danzig and Marduk. But when this live crusade ended, Bueno, Marquez, and the Cortez’s officially exited the band as, all the while, further offerings under the POSSESSED name regularly arrived.

This gets us almost up to speed.. almost! In 2017, the Beccera-led POSSESSED resurfaced with news that the band had signed with Nuclear Blast Records, now rounded out by guitarists Daniel Gonzalez (Nailshitter, Gruesome) and Claudeous Creamer (Dragonlord, Serpent, Girth), bassist Robert Cardenas (Coffin Texts, Agent Steel, Malice), and returning drummer Emilio Marquez (Brainstorm, Sadistic Intent, Engrave, Brujeria). They shared a new, demo quality song, “Shadowcult“, and informed fans that this modern version of the band was working on a new studio album.

Today, the dynasty of POSSESSED begins to come full circle with the announcement that the band’s first new full-length album in over three decades will soon arrive!

Yes, Nuclear Blast will unleash POSSESSED‘s ‘Revelations Of Oblivion‘ on May 10th (pre-order), and there is a brand new single, “No More Room In Hell“, to be experienced in a video clip below. It comes with the unveiling of the album artwork – created by Polish artist Zbigniew Bielak (Absu, Paradise Lost, Gorguts)… along with the following details:

‘Revelations Of Oblivion‘ was recorded at NRG Studios and Titan Studios, with Jeff Becerra as executive producer and Daniel Gonzalez as co-producer for the album. Mixing and mastering were handled by Peter Tägtgren (Amon Amarth, Immortal, Sabaton) at Abyss Studios in Sweden.

Jeff Beccera had much to share about the long-awaited new album, quickly elaborating on it by saying:

“This album from start to release has been a fantastic experience. All of us in Possessed hope you enjoy this newest release and we look forward to touring and creating much more new music in the future. We appreciate all of your support and dedication. Hope to see you during our upcoming tours & shows soon. Thank you to each and every one of you for your inspiration and dedication to Possessed.

“Working with Peter was a fantastic experience. We put a great deal of thought into who we wanted to produce our new album. Since we hadn’t made an all-new material release in well over 30 years, it was essential that we found the right person. Peter’s name kept coming up over and over, and after speaking with my bandmates they all really liked Peter as he is more organic, and somebody we felt would fit in well with our process.”

There you have it, metal lovers! We dwell upon the cusp of the glorious, extremely long-awaited next phase in the POSSESSED legacy, a band that truly is an integral element in the creation of death metal. Rest confident, reassured, and at the ready that POSSESSED has returned to resurrect and reignite a metallic inferno as they resume their rightful command as one of our mightiest legends of Metal!