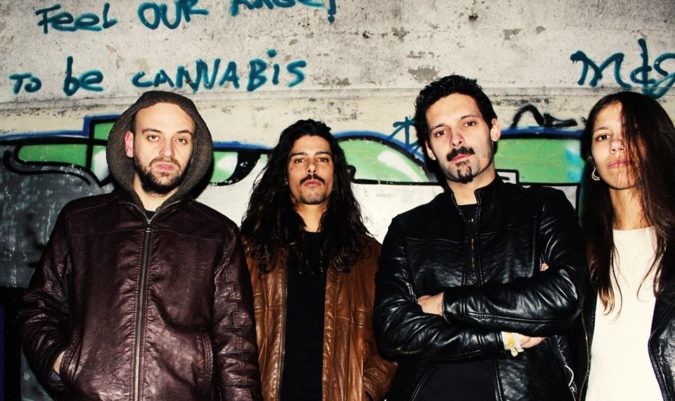 With these nine songs, we are treated to a smorgasbord of tastily refined, quality stoner rock with palette-pleasing desert and psych-rock flavoring for that little added something-something. The mix of these qualities in this particular recipe does seem to take on other elements at times, with one easily justified by adjoining such genre tags as grunge or even post / noise rock.

Though just formed in 2016, HEAVY CROSS OF FLOWERS – Telmo Cruz (guitar & vocals), Paulo Ferreira (bass), Beatriz Cruz (drums), and Mário Fonseca (guitar) – have nailed down an incredible sound for themselves. It is strong, solid, and especially alluring, and dare I say that one complete listen to this S/T album will make you an instant fan of the band, just as it did with me.

From the smoldering guitars that propel the controlled disorder of the very first song, “Social Dyslexia“, you immediately feel that this is something special indeed. With spatial portrayals of sonic swelter and swagger, the muscular heft of the track is well established by the time the vocals kick in around the four and a half-minute mark. Once they do, you might pick up on the same thing I did, the vocals from HEAVY CROSS OF FLOWERS are quite reminiscent of the dearly departed Chris Cornell… and that is a good thing here.

It’s not a deliberate attempt to copy or emulate, it just happens to be and is an added bonus to the already numerable aspects to enjoy about this band and this album. To be blunt, this is not upbeat or uplifting music meant to soothe one’s soul, no, instead, this is of a more alarming nature. It is harrowing and dark, and songs like “Addicted,” “Dead On Drugs,” the instrumental “MAGMA,” or the crushingly dense “DOGMA” are here to ruin any good time grooves.

Speaking of crushing and density, several of these cuts are bone-splintering descents into some truly doom excessive areas, like those of “Shell” or “Dead On Drugs“. But, that’s just it… a point worth making again, the ability that HEAVY CROSS OF FLOWERS has when it comes to stylistic diversity. There are clear-cut moments that exude unmistakable punk rock influences – see “Get Your Shit Together” – or ones channeling superbly contemporary alternative metal qualities, like the ones found on the phenomenal “In Memory Of“.

With just two songs falling under the five-minute running time (most average around seven minutes), there is a lot of ground covered in each of these tracks. One of the album’s stand-out selections is also one that ends this record, the uptempo, stunning “Love Makes Your Hair Fall Down“. This song, same as several others, really does go far in establishing the commercial appeal that HEAVY CROSS OF FLOWERS possesses and that this quintet has true potential to escape the underground.

Yes, stellar songwriting, electrifying execution, enthralling aural enhancements, and a downright appealing overall sound… HEAVY CROSS OF FLOWERS has it all and much, much more to boot. Are you ready to give them that shot I spoke of earlier? Just one unbiased listen to this album, from start to finish, and then see on which side of the fence you find yourself. This challenge is made even easier by the fact that this self-titled album is currently designated as NYP (Name Your Price) at Bandcamp so there really is no excuse to miss out on this remarkable record.